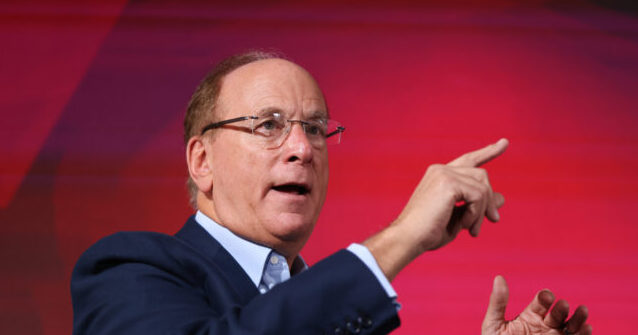 Larry Fink said that criticism of ESG investing has become personal and accused critics of trying to “demonize” an investment strategy he has championed for the past several years.

“I’m taking this very seriously,” the BlackRock chief said in an interview with Bloomberg TV on Tuesday. “We are trying to address the misconceptions. It’s hard because it’s not business any more, they’re doing it in a personal way. And for the first time in my professional career, attacks are now personal. They’re trying to demonize the issues.”

Fink spoke from Davos, Switzerland. Because, of course, he is there for the World Economic Forum, perhaps the premier event for well-heeled believers in policies and investment strategies focused around climate change.

Fink has become a lightning rod for controversy over ESG—short for environmental, social, and governance—investing as last year’s spike in energy prices and Europe’s dependence on Russian energy highlighted years of underinvestment in traditional energy sources such as oil and natural gas. Many conservatives describe ESG as “woke capitalism” and accuse its proponents of advancing a leftwing political agenda disguised as an investment strategy.

BlackRock CEO Larry Fink is actively using your hard-earned investment dollars to vote in support of his personal social justice warrior goals. Ironically, this is done in the name of “preserving democracy” while Fink actively circumvents the courts, legislatures, and will of the American people to not only dictate national policy from the board room but also change human behavior through a social credit score known as ESG.

Louisiana’s Treasurer John Schroder notified Fink last year that Louisiana would be divesting from the investment management company. “This meant pulling $794 million from the fund over the course of this year to protect both Louisiana’s economy and the pensions of those who have placed trust in our ability to invest that money wisely,” Landry said.

In December, North Carolina Treasurer Dale Folwell sent a letter to BlackRock calling for Fink to “resign or be removed” from the firm’s leadership team “immediately” over his obsession with pursuing a leftist “political agenda.”

Florida Governor Ron DeSantis has accused BlackRock is advancing a “woke” agenda and hurting the fossil fuel industry. Florida pulled $2 billion from BlackRock in December. Missouri announced last year it would pull $500 million in assets from BlackRock. In August, Texas said it regards BlackRock and nine other firms as hostile to domestic fossil fuels—a charge the company denies.

BlackRock’s assets under management crossed the $10 trillion threshold at the end of 2021. Thanks to withdrawals and declines in asset values, the firm’s AUM stood at $8.59 trillion at the end of December, according to Bloomberg News.

Fink said his company wants to “change the narrative” around ESG. He said said the next letter to business leaders will focus on the “concept of hope.”

“BlackRock is a firm that tries to sell hope because why would anybody put something into a 30-year obligation unless you believe something is better in 30 years?” Fink said.