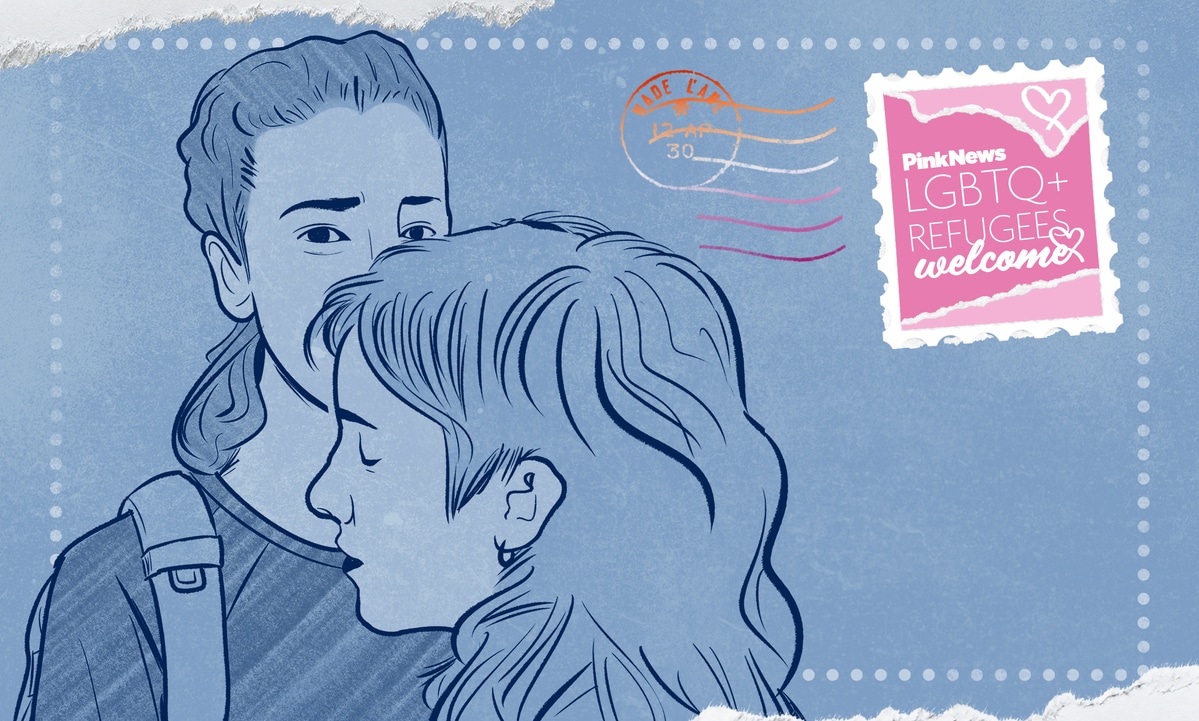 Two days after Russia invaded Ukraine, Irene and Hanna made the painful decision to flee their home country.

Like so many other Ukrainians, Irene and Hanna made the journey to Poland, where they’ve settled in Krakow. They’ve decided to remain there until there’s peace in Ukraine.

“We decided it’s better for us to stay and find [work] here,” Irene tells PinkNews. “It’s more stable for us and that way we can donate to the Ukrainian army to be more productive.

Their story is just one that PinkNews is sharing this holiday season as part of the LGBTQ+ Refugees Welcome campaign.

Over the coming weeks, we will share stories of LGBTQ+ asylum seekers and refugees from all across the world. Some have found safety, while others are still grappling with harsh asylum systems that are designed to keep refugees out.

When Russia invaded Ukraine in February, Irene and Hanna had only been seeing each other for a few weeks. They first met on Tinder in January, just weeks before Russia launched its full-scale invasion.

They laugh as they recall how they planned to take things slowly. Irene and Hanna could never have known they would be fleeing the country together within weeks of exchanging their first messages.

Things have moved quickly since then. With the help of the local LGBTQ+ community in Poland, they’ve been able to build a life for themselves.

“Our situation is more stable now than it was in our first two or three months here,” Irene says. We’ve found an apartment, we’re connecting with people which is great.

“During the first two, two and a half months, it was terrible for us, especially for our mental health. We were struggling to find jobs, with finding an apartment.

“The people from an LGBT organisation here really helped us and they were supporting us during this whole journey. We are really grateful for this.”

Ukraine’s Irene and Hanna: ‘Something bad was going on’

They still remember the fear that gripped them when they woke to the news on 24 February that Russia had launched a full-scale invasion in Ukraine.

“When I woke up my thoughts were so messy,” Irene says. “I didn’t understand fully what was happening, I just understood that something bad was going on.

“I went to my parents’ house, we were packaging an emergency backpack for me and for them. The next day we decided to meet with Hanna. We were staying in one of the subway stations because it was really dangerous to stay outside because some Russian forces were in my district.”

In the end, Irene and Hanna decided to make their way to Poland while Irene’s parents opted to stay behind.

“It was really hard to leave my parents there but at some point I had to understand that it’s their decision, they’re kind of [older] and it’s better for them to stay in a safe space for them and it would be more complicated for them to create this path.

“We have many struggles with our family, with our relationships to them, with our mental health. It’s going to be a long journey to stabilise it.”

We are praying and donating to the Ukrainian army. We really believe in the victory of our country.

Hanna remembers how she woke up on the morning of the invasion to a call from her mother who wanted to know if she was safe. That phone call alerted her to what was happening in her country.

She initially went to work as normal in a café, but within an hour, she had shut the shop and gone back home as the full extent of the unfolding crisis started to dawn on her.

That night, she couldn’t sleep.

“The next day I woke up, packaged everything and went to the subway to meet with Irene.”

Irene adds: “It happened so fast. We didn’t have enough time to analyse what was happening.”

Before long, Irene and Hanna were on a train to Poland. Today, they’re safe from harm, but they always keep their eyes firmly on Ukraine. It’s their home country, the place they love. They haven’t lost hope – they are willing Ukraine to emerge victorious in the war.

“We are praying and donating to the Ukrainian army. We really believe in the victory of our country,” Irene says.

They also have hopes for life after the war.

She expresses hope at the news that Ukrainian president Volodymyr Zelensky will look into legalising same-sex marriage after the war. It’s a small step that will help Irene and Hanna build the future they desire.

“It’s really great for couples like us. We definitely want to be married – we’re planning our future, our dream house, our children. I really want us to be part of the Ukrainian LGBT community in the future.”

For people like Irene and Hanna, the future is all too uncertain. The war in Ukraine has exacerbated a refugee crisis that has been rumbling on for years – the UNHCR recently reported that more than 100 million people have now been forced to flee their homes globally.

Their lives have been thrown into disarray, with many of those forced to undertake dangerous, traumatising journeys to get to safety.

In the face of crisis, many western countries – including the UK – impose harsh policies that make it increasingly difficult for people seeking asylum to find a safe base.

That’s why PinkNews launched the LGBTQ Refugees Welcome campaign. The initiative is raising funds for Micro Rainbow, a charity that provides safe housing for LGBTQ+ people seeking asylum, and for OutRight Action International’s LGBTIQ Ukraine Emergency Fund, which distributes money to activists on the ground in Ukraine.

This holiday season, PinkNews will be sharing the personal stories of refugees and people seeking asylum. Starting with Irene and Hanna, the series will put a spotlight on the painful realities LGBTQ+ people across the world face that force them to leave their homes, from familial violence to anti-LGBTQ+ laws.

But that’s not all – the series will also show how a person’s life can change radically when they’re granted asylum. When they can get to safety, LGBTQ+ people have the chance to thrive.

PinkNews wants to show how living without the threat of violence or persecution can help queer people build beautiful, kaleidoscopic lives – but they can only do so if they’re given the proper support.

Please give what you can to the PinkNews LGBTQ Refugees Welcome campaign on GoFundMe. Through GiveOut, we will be directly donating to OutRight Action International’s LGBTIQ Ukraine Emergency Fund, helping the activists and organisations on the ground in Ukraine and surrounding countries to support the needs of LGBTQ+ people turning to them for life-saving help.

Our second beneficiary, Micro Rainbow, creates safe homes where LGBTQ+ asylum seekers from Ukraine, Afghanistan and beyond can be safe while they endure the UK’s gruelling asylum process.

There isn’t enough copper in the world, shortage could last until 2030