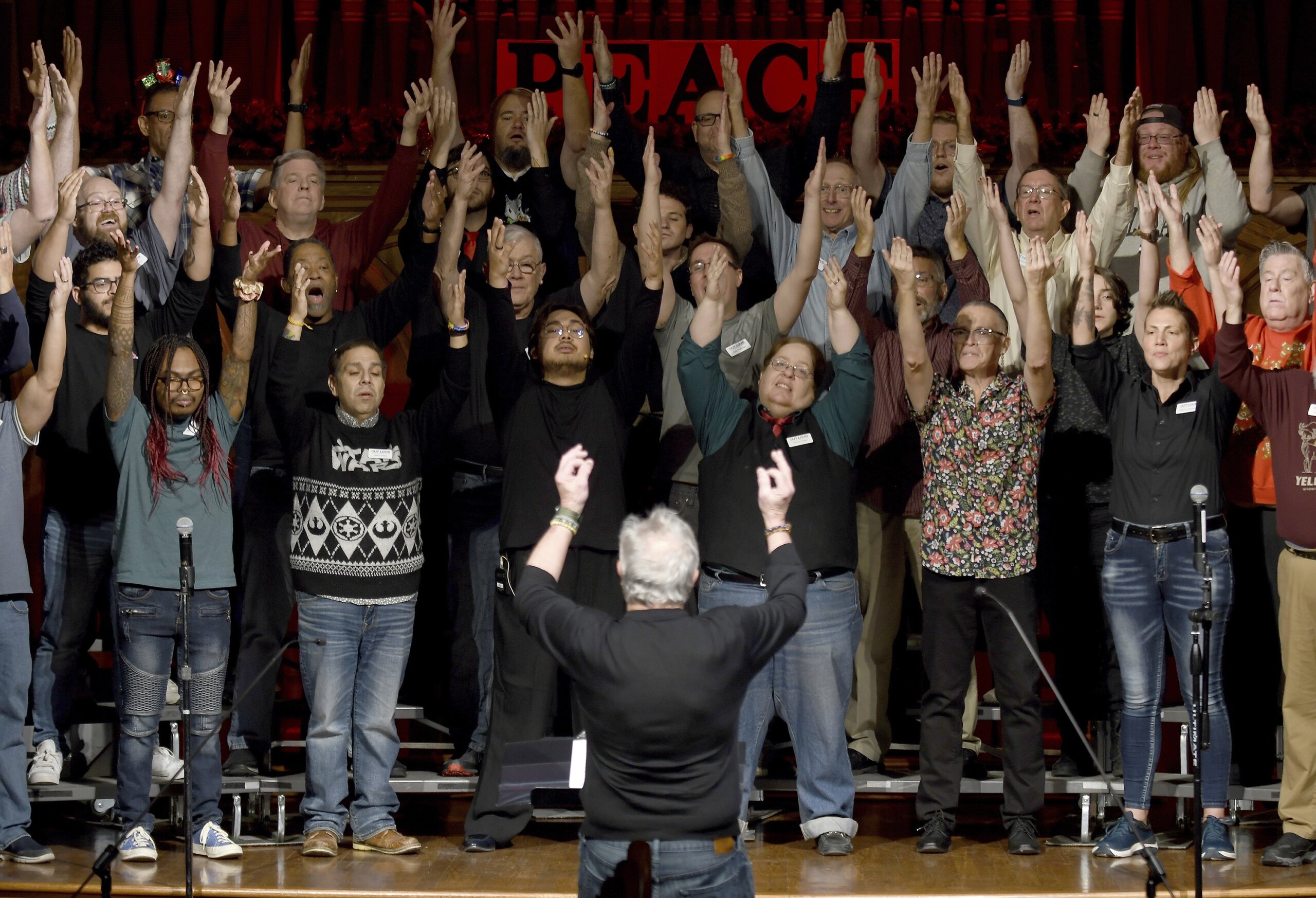 Below the vaulted dome and dark wood beams of a church in Colorado Springs, a gay men’s choir rehearsed for a concert that’s taken on new meaning after a LGBTQ night club became the site of a gruesome shooting that killed five and wounded 17.

COLORADO SPRINGS, Colo. (AP) — Below the vaulted dome and dark wood beams of a church in Colorado Springs, a gay men’s choir rehearsed for a concert that’s taken on new meaning after a LGBTQ night club became the site of a gruesome shooting that killed five and wounded 17.

The old lyrics that rang through the halls of the First Congregational Church were haunted by new memories of the Nov. 21 violence at Club Q — the sound of screams over club music, the sight of bullet wounds plugged by napkins and people pleading with their friends to keep breathing.

In the 13 days since the shooting, Colorado Springs’ LGBTQ community has worked to collect itself and forge ahead. Patrons of Club Q — those who survived the rampage as well as regulars who weren’t there last Saturday — have organized donation drives for victims’ families, leaned on queer-affirming clergy and renewed their commitments to LGBTQ spaces and organizations, including Out Loud Colorado Springs Men’s Chorus.

Gay and lesbian choruses like Out Loud were borne out of the 1978 assassination of San Francisco Supervisor Harvey Milk and have remained steadfast pillars of the LGBTQ community from the AIDS crisis through mass shootings such as Orlando’s Pulse nightclub in 2016.

In Colorado Springs, members of Out Loud prepared for three sold-out concerts, their first performances since the COVID-19 pandemic forced them to cancel shows. The rehearsals brought laughter, and at times damp eyes, chins raised and heads defiantly held forward. They’re sending a clear message: “We are saying we are still here,” said Marius Nielsen, a transgender man who sung from the front row at a Wednesday night rehearsal.

In one practice session, Nielsen broke down while singing. He said he felt the swelling strength of those around him through the music.

“Everyone has you, even if you falter,” he said.

The concert’s solemn notes punctuated a largely joyful event where talented singers belted out Christmas carol medleys, some more campy than others. Members of the chorus dressed as the robed three kings — but in feathery, neon scarves — and struck go-go dancer poses. Another performer wearing Claus-style short shorts swooned over Santa.

“We will grieve, we will feel anger and sadness, and in the midst of that we will feel joy and hope,” said Bill Loper, the concert’s artistic director.

Standing three rows back from Nielsen, Rod Gilmore said the choir was keeping him going. With the violent memories still fresh, Club Q shooting survivor Gilmore said he would have reentered the closet he left last year at age 55 if it wasn’t for those standing next to him in the church.

“It’s given me solace and a comfortable feeling that relaxes me and makes me feel like I’m a whole of something, not just a part,” Gilmore said.

Colorado Springs residents are working to spread that feeling of togetherness throughout their city. Matthew Haynes, Club Q’s co-owner, is looking to remodel and install a garden and memorial to celebrate the lives lost. A friend cooked a vegan casserole for the owners. A Las Vegas resident drove to Colorado Springs to play a piano fastened to the bed of his red Toyota pickup.

“There’s no playbook for this,” said Haynes, who has started a GoFundMe page committed to “bringing Club Q back as the safe space for Colorado Springs.” His first goal is to ensure survivors and those mourning are supported.

At a memorial on Wednesday, Colorado Gov. Jared Polis paid his respects in front of a heaping row of flowers and gazed at photos of those lost. In 2018, Polis became the first openly gay man elected governor in the U.S.

A retired teacher who worked near Columbine High School during the 1999 mass shooting there dropped off flowers next to a stuffed pink flamingo and said he worried these tragedies have become so commonplace that people have become desensitized.

Amidst vigils, marches and outpourings of support on social media, Aaron Cornelius is among those in Colorado Springs demanding the tragedy be mourned and remembered.

“We are not going away,” Cornelius told a large audience Tuesday night at Lulu’s Downstairs, a bar just west of Colorado Springs that held a silent auction where poets, speakers and musicians performed. “This community is a lot stronger than they think. They think we are vulnerable; they think we are weak.”

On stage, they oscillated between fiery calls to action to fight the status quo and gentler messages advocating love over hate.

The faces of audience members were illuminated by candles as they chanted: “I am valid. I deserve to be safe. I may be afraid, but bravery is going out and living in the face of fear. I am brave. I am brave.”

During the auction, a self-described “later-in-life lesbian” pastor perused bespoke wine bottles labeled with Club Q and the date of the massacre, as well as gift cards for haircuts and a dog bandana reading, “I heart my Dads.”

Wyatt Kent, a drag queen who performed at Club Q the night of the shooting, read poems and anecdotes penned by their partner, Daniel Aston, who was killed while working behind the bar.

In one anecdote, Aston, who was a transgender man, wrote of moving to Colorado Springs from Tulsa, Oklahoma, and how he had grown into himself: “I’m less of a doormat, I’m more assertive, I have a job as a bartender that I love. I no longer want to die.”

Kent then read one of Aston’s poems, which Kent described as Aston helping the community move forward: “Some things never make any sense, like salmon downstream, like sweat rolling down your sleeve. That’s just the way these things go.”

“All of that is part of healing: the laughing, the crying, all of it. And then just being together. After something like this, you just naturally want a human to be with,” event organizer Kittie Kilner said.

That mixture of pride and rage, laughter and tears, is what Out Loud aims for in their upcoming holiday concerts.

“Music is magical,” chorus member Josh Campbell said. “We aren’t talking to each other, but … we connect on an emotional level.”

The small audience sensed that magic at rehearsal as the chorus progressed through “I Heard the Bells on Christmas Day,” a carol based on a Civil War-era poem by Henry Wadsworth Longfellow about his wounded son.

Their despair lifted as the music pulled toward resolution: “Then pealed the bells more loud and deep: God is not dead, nor doth he sleep. The wrong shall fail … the right prevail with peace on earth.”

How much DC region homeowners who sold in 2022 made