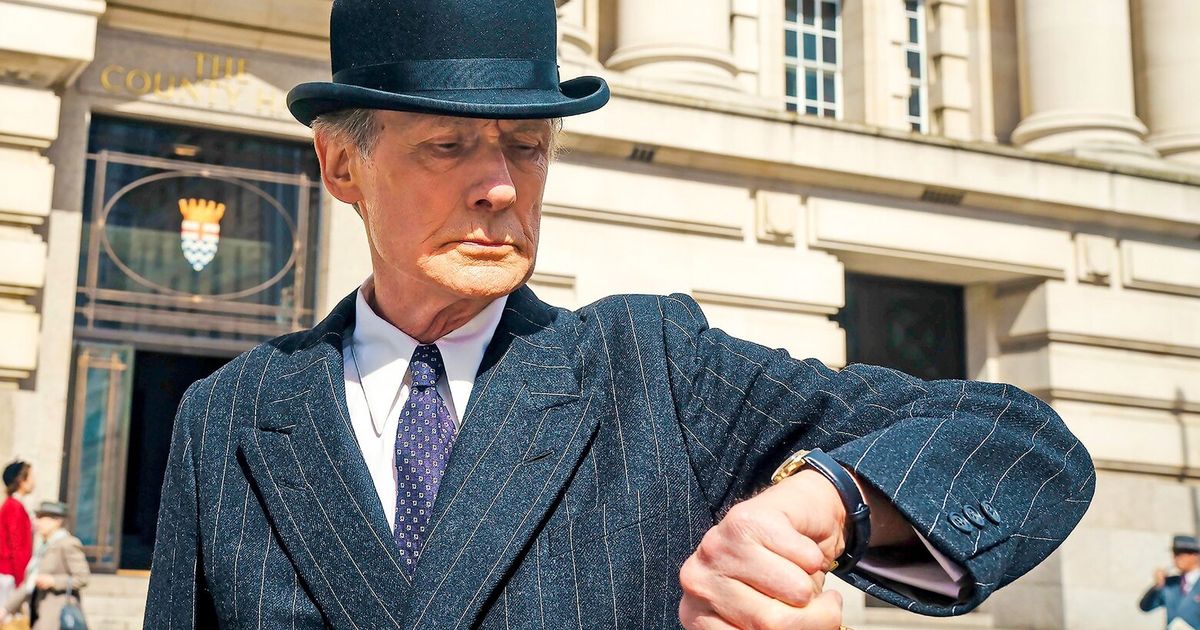 It should come as no shock that the great novelist Kazuo Ishiguro (“The Remains of the Day,” “Never Let Me Go,” “Klara and the Sun“) has a beautifully delicate hand as a screenwriter — but nonetheless “Living,” directed by Oliver Hermanus and based on Akira Kurosawa’s 1952 film “Ikiru,” arrives as a happy surprise. Not that it’s a happy movie, precisely, but this quiet tale of an ordinary 1950s London man (Bill Nighy) facing the end of his life is a joy: elegantly written, movingly performed, evocatively filmed. Like the best of novels — one of Ishiguro’s, for example — it creates a tiny world to get lost in, one whose faces and shadows and sunlight linger with you, ever after you’ve returned to your own.

Nighy plays Mr. Williams, a stooped, unsmiling man who carries an umbrella even when the weather’s fine, and whose voice brings to mind the dryness of a dusty pile of papers. He’s a longtime civil servant in a bureaucracy-clogged London office, one of an endless parade of commuters in dark suits and hats, where his job mostly consists of putting file folders into endless stacks and shuffling off people who want something done. A widower, he lives with his son and daughter-in-law in a suburban house where nothing seems to have changed for a long time. And then, something changes: Mr. Williams is told by a doctor that he has a terminal illness, and very little time to live. What will he do? What would you do?

It would have been easy for this type of story to slip into sentiment and sappiness, but Ishiguro’s screenplay never tells us too much, and Hermanus keeps the tone low-key; nobody, including Mr. Williams, is a saint here. Indeed, Nighy shows us not a hero realizing the glorious gift of life before it’s too late, but a tired everyman who’s reluctantly realizing that he’s rather messed things up, and that most of what he’s done can’t be undone. After toying a bit with debauchery (Tom Burke gives a sly turn as a dissolute but good-hearted barfly/writer happy to show Mr. Williams his favorite haunts), and with gazing into the doe eyes of a charming former co-worker (Aimee Lou Wood), he settles on just one thing he can do, to leave the world something to remember him by. It’s a small thing, but it’s perfect.

As is Nighy, who has an uncanny way of making his character seem faded by life, but letting us see tiny glimmers of the different man Mr. Williams once was. Watch him, as he closes his eyes and sings a sentimental song in a bar, transporting himself for a moment to an earlier, brighter time. Watch him practicing, in a mirror, how to tell his son the news of his diagnosis, with appropriate casualness (“Bit of a bore, but … .”). Watch him sitting alone in the dark in his living room, a photo of his late wife his only company. And watch him after he’s done what he vowed to do, as picturesque snow falls, and his voice seems to become lighter and younger and stronger again. “Living” is a small film, just as Mr. Williams’s was a small life, but it leaves you the better for having seen it.

Jimmy Kimmel jokes that frostbitten Harry got oedipal about Diana