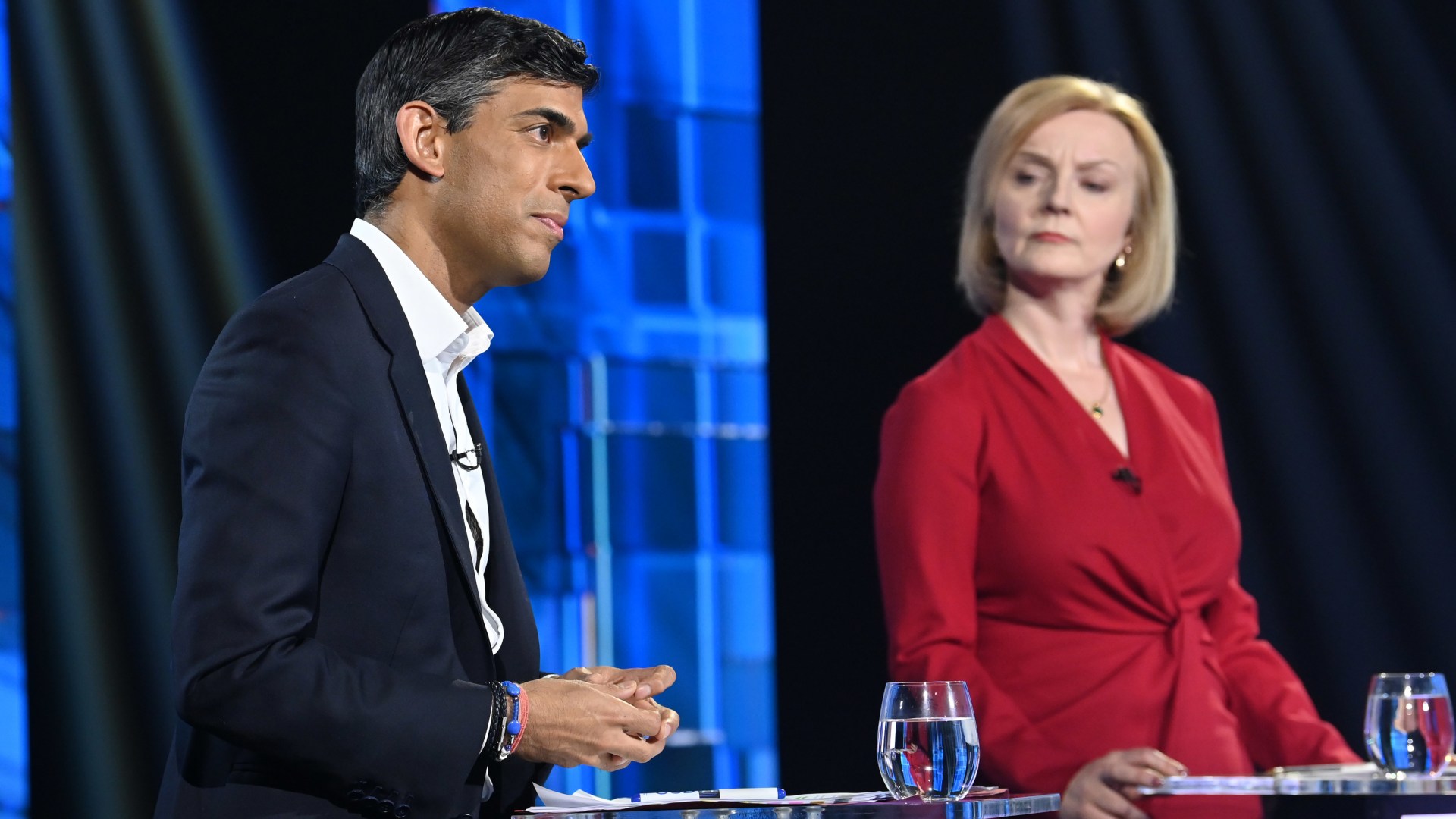 In a bloody skirmish in the battle for No10, the Foreign Secretary said her rival was “scaremongering” by rubbishing her proposed tax cuts.

The wannabe PMs clashed straight away as the prime time BBC debate exploded into a tug-of-war for the soul of the Tory party.

Top Tories today called for a ceasefire in the brutal blue-on-blue attacks that are driving a stake through the party in this contest.

But it fell on deaf ears as the pair shouted over each other and launched stinging broadsides trashing their rival’s plan.

In their opening ding-dong Ms Truss machine-gunned the National Insurance rise implemented by Mr Sunak while he was Chancellor.

Driving a dump truck over his record she said: “We promised not to raise it in our manifesto in 2019. The people here who voted Conservative for the first time, expect us to fulfil our promises.”

But a fired-up Mr Sunak interrupted the Foreign Secretary and warned her tax-cutting spree would “tip millions into misery”.

He said it was “not moral” to raise taxes now and saddle the next generation with debt, likening her plans to a “sugar rush”.

Tonight’s debate in Stoke kicks off a week of slanging with two more match-ups scheduled, including The Sun’s showstopper tomorrow night.

As they tussled on the economy, Mr Sunak recited her own favourite economist’s words back at her that tax cuts would lead to higher interest rates.

Ms Truss shot back that he was “scaremongering” and promoting “Project Fear”.

It prompted the ex-Chancellor to go for the jugular and dredge up Ms Truss’ Remainer past.

He savaged: “I remember the referendum campaign and there were only one of us who was on the side of Remainer Project Fear and it was you not me.

Tax has been a central battleground in the contest, with Ms Truss hell bent on tax cuts while Mr Sunak has opted for caution.

Ms Truss is promising to reverse of the National Insurance and planned Corporation tax hikes, as well as a one-year moratorium on green levies.

Mr Sunak confronted her: “You talk about growth, I have spent my career before politics in business, not just here, but around the world.

“And if you want to drive growth in the 21st century economy, it’s about so much more than tax.

“It’s about bringing the change we need to make sure that our children are equipped in the digital industries.”

Mr Sunak failed to promise immediate help for people’s bills if he becomes PM, leaning on the package of support he announced last May.

He said: “You may remember one of the last things I did as chancellor was announce a significant amount of support to help people get through autumn and the winter with those bills.

“And of course, as prime minister, I’d like to make sure that we always have the policies in place to support people like you, who are working incredibly hard to provide for you and your families.”

Ms Truss is ducking a Friday night grilling with top interrogator Andrew Neil, while Mr Sunak is taking up the offer.

The race so far has seen brutal mud-slinging despite their pleas for harmony.

She tweeted: “Liz Truss will be travelling the country wearing her earrings which cost circa £4.50 from Claire Accessories.

“Meanwhile… Rishi visits Teeside [sic] in Prada shoes worth £450 and sported £3,500 bespoke suit as he prepared for crunch leadership vote.”

It prompted a furious response from Sunak-supporting MP Angela Richardson, who shot back: “FFS Nadine! Muted.”

“And I don’t think this is really the key issue in the campaign, frankly, you know, we have had a really serious discussion about the importance of growing the economy, and what will help achieve that.

The Foreign Secretary is the bookies’ favourite to bag the top job when the results are announced on September 5.