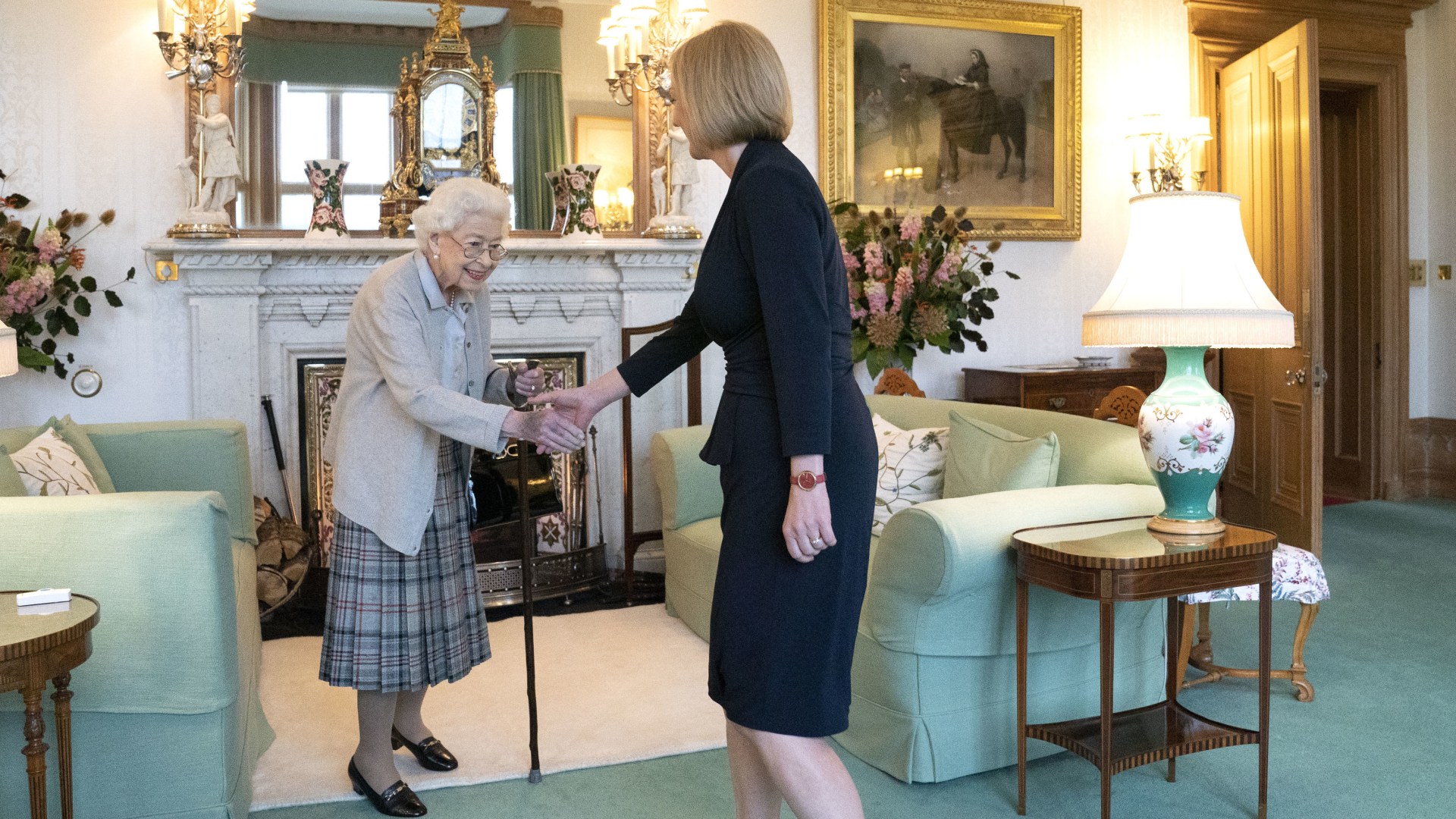 THE Queen has formally appointed Liz Truss as the 56th Prime Minister of the United Kingdom today with a special audience at Balmoral.

Her Majesty, 96, and Ms Truss, 47, met in Scotland this lunchtime for a traditional “kissing of the hands” ceremony.

The Queen grinned as she shook hands with Ms Truss – the 15th Prime Minister she has appointed during her 70-year reign.

Supported by a walking stick, Her Majesty took to her feet to welcome the incoming PM in a grand drawing room.

Today marked the first time the Queen has held such an audience outside of London or Windsor.

She appeared in great spirits despite suffering recent mobility issues, which forced the decision to hold today’s changing of the guard at Balmoral.

Earlier, Ms Truss and husband Hugh O’Leary made the 500 mile journey by plane from London in stormy conditions, which delayed her arrival.

The newly-appointed PM will now jet back to London to give her first address outside Downing Street at around 4pm.

A spokesperson for the palace said: “The Queen received in Audience The Right Honourable Elizabeth Truss MP today and requested her to form a new Administration.

“Ms Truss accepted Her Majesty’s offer and kissed hands upon her appointment as Prime Minister and First Lord of the Treasury.”

The ex-PM also held an audience with the Queen for around 40 minutes, where he resigned from the top job.

The palace confirmed “Her Majesty was graciously pleased to accept” his resignation.

When Boris returns to London the ex-PM will be a backbench MP.

Speaking from outside No10 for the final time this morning, Boris said “this is it folks”, before comparing himself to a booster rocket as he said he would re-enter politics “gently”.

Watched on by MP allies, his former No10 staff and wife Carrie, BoJo said: “I am now like one of those booster rockets that has fulfilled its function and I will now be gently re-entering the atmosphere and splashing down invisibly in some remote and obscure corner of the Pacific.”

Today marked the first time the Queen held a so-called kissing of the hands outside London or Windsor.

In 1868, Queen Victoria appointed Benjamin Disraeli at Osborne House, a then-royal residence on the north coast of the Isle of Wight.

And in 1885, Lord Salisbury was appointed at Balmoral while in 1908, King Edward VII appointed H. H. Asquith in a hotel room in the south of France.

It is understood the decision to have the kissing of the hands ceremony at Balmoral was taken to provide certainty to Mr Johnson’s diary and prevent a last-minute change of plans.

Windsor Castle had been earmarked for the traditional constitutional ceremony before Palace officials decided not to move the Queen from Balmoral.

She has been suffering mobility issues for a while, although made a rare appearance on the Palace balcony for the Platinum Jubilee.

Ms Truss is the 15th PM appointed by Her Majesty.

The new Tory leader will return from Scotland today to deliver her debut speech as PM from Downing Street.

The PM is expected to make the address at around 4pm.

COLORADO CORONAVIRUS: Are Coloradans no longer concerned with COVID-19?