LIZ Truss is the bookies’ favourite to be PM after a surge of support in the penultimate round of the Tory leadership election.

The Foreign Secretary now needs to win over the MP supporters of rising star Kemi Badenoch, who was yesterday eliminated from the race.

Her 59 votes will now decide if Ms Truss or Trade Minister Penny Mordaunt runs off against Rishi Sunak, who is almost guaranteed his place in the final.

If Ms Truss gets enough backers to make the final two, polling suggests the Tory membership will select her ahead of Mr Sunak.

After a poll showed Ms Truss trouncing both Mr Sunak and Ms Mordaunt among Tory members, she is now even money to seize the keys to No10 on September 5. 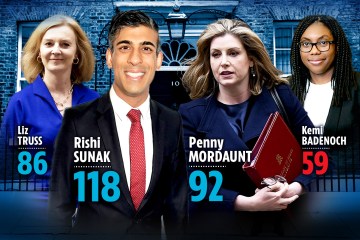 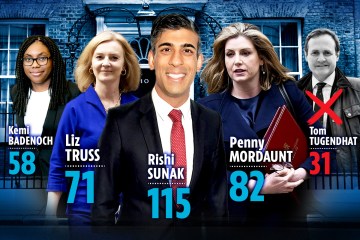 But Mr Sunak supporters are confident he can turn it round in the eyes of the membership.

In yesterday’s 4th round of voting, Ms Truss picked up 15 MPs to command the support of 86 and was hoovering up backing from the Right of the party.

Ms Mordaunt increased her share by ten to sit on 92, while Mr Sunak gained an extra three votes to put him at 118 — still just shy of the number effectively guaranteeing him entry to the final phase.

But Tory MPs believe most of Mrs Badenoch’s support will move to Ms Truss or Mr Sunak, eliminating the faltering Mordaunt bid.

Yet dark arts and “vote swapping” could yet see Ms Mordaunt put through into the run-off, if Mr Sunak’s supporters think she would be easier for their man to beat.

And a number of Mrs Badenoch’s supporters were said to be part of an “anyone but Liz” movement, meaning they could vote for Ms Mordaunt to kick out Ms Truss.

One senior Tory MP said: “Lots of people who you would think were natural Liz supporters were backing Kemi because they think Liz is weird, wooden and can’t win an election. They will probably go to Rishi now.”

But last night the Truss camp were cock-a-hoop with the direction of travel.

Former Tory leader Iain Duncan Smith told The Sun: “There is no question in mind now that Liz has the ‘big mo’ (momentum).

“It’s not where you are at the start in these races, it is where you track in the latter stages, and Liz is accelerating while Rishi’s stalled.

“She’s got the steel and determination to do the job.”

Betting market-data firm Smarkets said: “Liz Truss goes into the final round of voting in third place, but the trading activity now suggests she’s the most likely overall winner at 48 per cent.

“She outperformed expectations in round four and is now given an 80 per cent chance of overhauling Penny Mordaunt.

“Despite Mordaunt gaining an extra ten votes, the odds suggest there is a 79 per cent chance she will be eliminated.

“Punters clearly expect the majority of Kemi Badenoch supporters to be transferring their votes to Truss.”

But other senior Tories warned Ms Truss must be stopped.

David Davis told LBC: “I’m the bigger supporter of tax cuts in the Tory party and even I think Liz Truss’s plan goes too far.”

He said he believed the Sunak campaign was shunting votes towards Ms Truss to get her into the final two to tee up a showdown between the two heavyweights.

Mr Davis said: “He’s got his four or five chief whips in a boiler room somewhere, reallocating them.”

Despite topping the ballot of MPs, there were grim numbers for Mr Sunak from a YouGov poll of 725 party members.

Ms Mordaunt, who had been put ahead in recent weeks, was also losing to Ms Truss

The Sun can also reveal that wavering Red Wall voters reckon Mr Sunak is too rich and “out of touch” to be PM.

As the leadership race reaches a knife-edge conclusion, we heard what traditional Labour voters in Oldham who turned Tory in 2019 really think of the contenders.

In a hard-hitting assessment, they said they feel let down by outgoing PM Boris Johnson and had “lost faith” in politicians.

Their biggest worry was rocketing supermarket bills and they are desperate for the next Prime Minister to do more to ease the cost-of-living crisis.

In a blow to front-runner Mr Sunak, voters were suspicious of his wealth and the previous non-dom status of his billionaire heiress wife Akshata Murthy.

Meanwhile, Ms Truss and Ms Mordaunt showered the Badenoch campaign with praise, as they battled over her supporters.

Former equalities minister Mrs Badenoch, who is tipped to land a senior Cabinet job under the eventual winner, thanked supporters for backing her “vision for change”.

Team Truss said: “Kemi Badenoch has run a fantastic campaign and contributed enormously to the battle of ideas in this contest.

“Now is the time for the party to unite behind a candidate who will govern in a Conservative way and who has shown she can deliver time and again.” 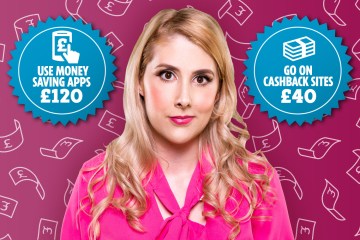 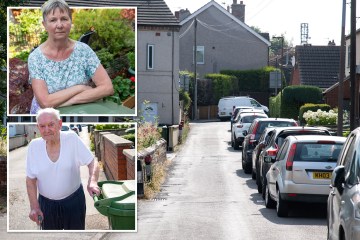 Ms Mordaunt chimed in: “I want to pay tribute to my friend Kemi Badenoch who electrified the leadership contest with her fresh thinking and bold policies. She and I both know that the old way of government isn’t working as it should.

“Voters want change. We owe it to them to offer a bold new vision for this country. Kemi’s passion for this showed and I’m glad she put herself forward to be heard.” 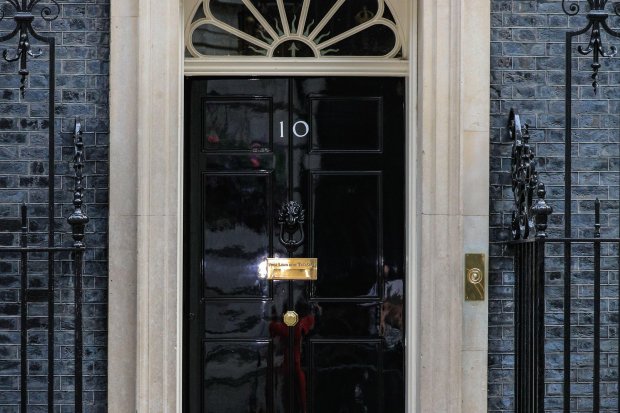 AS the Tory leadership battle enters its final hours, the last three are scrambling for every last vote.

THE majority of Kemi Badenoch’s backers support Liz Truss to put her through to the final.

Kemi has savaged Penny Mordaunt over women’s rights in the past — so there is wariness there.

SCENARIO 2: TOO CLOSE TO CALL

KEMI’S 59-strong support splits evenly between the trio — leaving Sunak in the final but too close to call between Penny and Liz.

Just six votes separate them — making it possible either of them could end up in the final.

WITH strong “Anyone but Liz” and “Stop Penny” operations in full swing, Team Rishi may opt to use some of their spare votes to propel the candidate they most want to face into the final run-off.