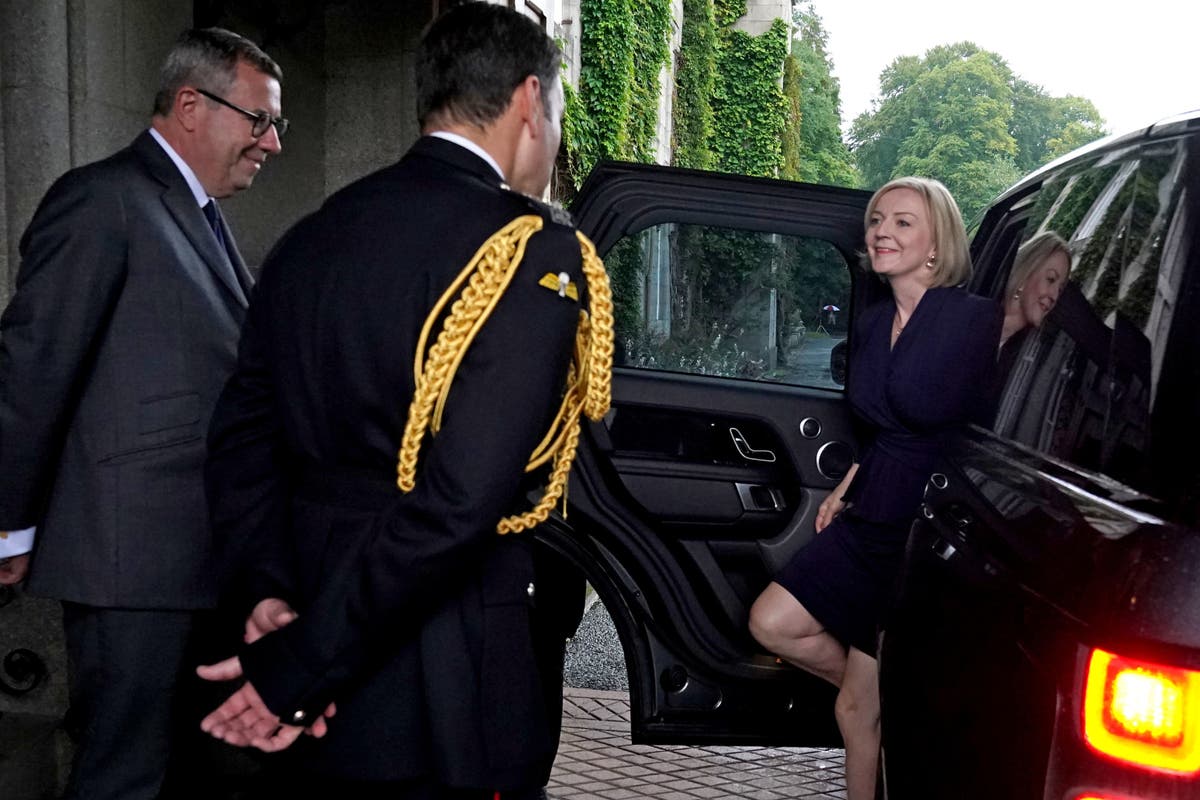 iz Truss has arrived at Balmoral Castle for an audience with the Queen to become the new prime minister after Boris Johnson formally resigned.

Ms Truss will be the third female to hold office in history, and the 15th prime minister that has been appointed under the Queen’s reign. The first was Winston Churchill in 1952.

Ms Truss will then return to London to form her Cabinet and have her own podium moment outside No10 on Tuesday afternoon.

Earlier on Tuesday Mr Johnson gave his final speech outside No10 Downing Street, highlighting his government’s record on Brexit, supporting Ukraine and the Covid-19 vaccine rollout.

Mr Johnson, who joked he would now be “re-entering the atmosphere and splashing down in some remote corner of the Pacific”, said he would be offering “fervent support” to Liz Truss’s government during a “tough time” for households across the country.

The country’s next prime minister Liz Truss has swept onto the Queen’s private Scottish estate in a chauffeur-driven car with her husband Hugh O’Leary.

She will be formally invited to form a Government and become prime minister during her audience with the Queen.

Ms Truss said “good afternoon” as she first shook hands with the Equerry, who gestured towards Sir Edward and the aide introduced himself before the politician and her husband were ushered inside.

She will be appointed as the UK’s new prime minister by the Queen.

Boris Johnson and his wife spent almost 40 minutes with the Queen before leaving Balmoral a few minutes before midday.

In a statement, Buckingham Palace said: “The Right Honourable Boris Johnson MP had an audience of The Queen this morning and tendered his resignation as Prime Minister and First Lord of the Treasury, which Her Majesty was graciously pleased to accept.”

The Government has been “deliberately stoking up the flames of distrust and disunity” with union leaders amid widespread strike action, according to deputy Labour leader Angela Rayner.

When asked whether Labour MPs should be on picket lines supporting striking workers, Ms Rayner told PA: “Labour have always supported the right to strike, it’s a basic right.

“As a (former) trade union official myself, if we ended up in industrial action it was a last resort, we didn’t want to have to ask our members to do that, and members don’t want to do that.

“The rhetoric that is coming out of Government is about deliberately stoking up the flames of distrust and disunity.

“What we want to do is bring people together around the table, improve the standard of living for people and support British industry.”

And just like that, Boris Johnson has left the Queen and Balmoral Castle.

Pages were on hand to open the doors of the chauffeur-driven car which arrived in light rain and stopped at the front door.

The head of state and Mr Johnson will meet in the drawing room of the private royal residence where the former Tory party leader will offer his resignation to the Queen.

Following convention, the politician is expected to leave the Queen’s estate via a private route.

Boris Johnson has arrived at Balmoral Castle to meet the Queen and hand in his resignation.

Therese Coffey will be appointed Liz Truss’s Deputy Prime Minister as well as Health Secretary today, The Telegraph is reporting.

Questions are swirling over who will be in Ms Truss’s Cabinet. Key allies and supporters are already pencilled in for some of the most senior roles, including Business Secretary Kwasi Kwarteng who is widely expected to be given the crucial role of chancellor.

People who snore could be at increased risk of cancer, research finds