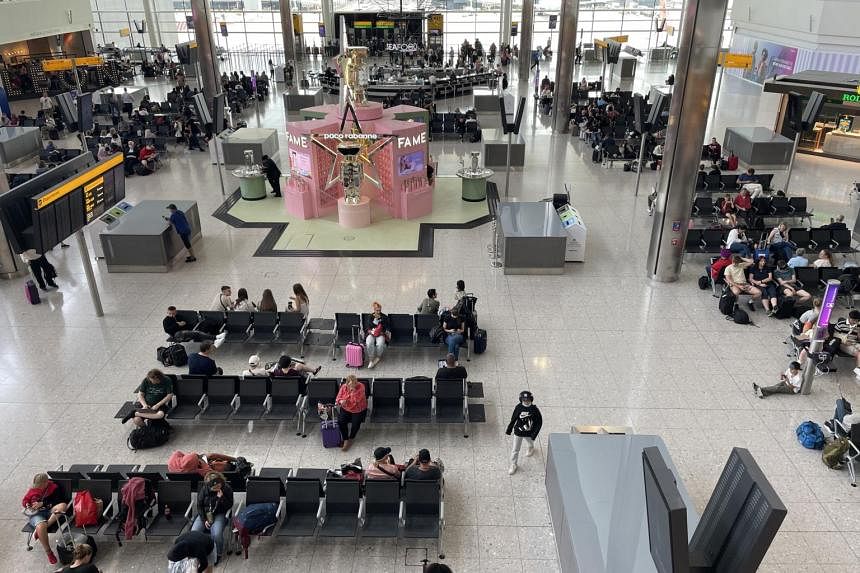 LONDON (BLOOMBERG) – London’s Heathrow warned that a cap on flights might stay in place for at least another year, as the British airport seeks to overcome travel disruptions that it said are the fault of slow recruitment of ground personnel by airlines.

“This is not going to be a quick fix,” Chief Executive Officer John Holland-Kaye said in an interview. “It’s absolutely possible that we could have another summer with a cap still in place. It’s going to take 12 to 18 months, and not just at Heathrow.”

Heathrow introduced a limit of 100,000 daily departing passengers on July 12 and said at the time that the measure would stay in place for two months.

The airport operator struck a more combative tone on Tuesday (July 26), saying airlines need to shape up and replenish their depleted ground-handling resources and that Heathrow itself had done its fair share of hiring in the past six months.

Weeks of travel chaos across Europe have pitted airlines against airports, each blaming one another for insufficient staffing and preparation as pandemic-weary travelers rushed to book their summer vacation.

Scenes of long waiting lines snaking out of terminals, mountains of stranded luggage and abruptly cancelled flights have become familiar images at airports in Britain, France and Germany, exacerbated by strikes at carriers including EasyJet and Deutsche Lufthansa seeking better pay deals.

EasyJet, which doesn’t fly out of Heathrow and uses the nearby Gatwick hub instead, said on Tuesday that disruptions forced it to take a £133 million (S$222 million) charge in the fiscal third quarter.

Budget specialist Ryanair warned on July 25 that delays to air-traffic control are a major issue, and that staffing at airports is still not at the required level.

“It’s pretty meaningless to start pointing fingers,” EasyJet CEO Johan Lundgren said on a call to discuss earnings. “There is nobody, no one across the industry who hasn’t seen and felt the pressure and the squeeze, whether it’s ground handlers or airport or air traffic management or airlines for that matter.”

Mr Holland-Kaye said airlines are responsible for hiring ground personnel, and that there remain shortages in areas like check-in, baggage handlers and air-bridge operators. Some companies have struggled to retain their workers because the hours can be grueling and pay isn’t always competitive, making a switch to areas like package delivery services more appealing.

Heathrow airport, Europe’s busiest prior to the coronavirus crisis, met with a backlash from passengers and resistance from airlines including Dubai-based Emirates when it revealed the flight restrictions after initially suggesting it had escaped the worst of Europe’s travel crisis.

It said its own resources are sufficient to cope with about 85 per cent of the traffic seen in 2019, which is roughly in line with current demand. About 1,300 people have been hired in the past six months and the number of security personnel is about the same as it was pre-pandemic.

Airline ground handlers, by contrast, still have no more than 70 per cent of pre-Covid resources available, Mr Holland-Kaye said.

The airport, located in the southwest of London, said the limit on flights is 50 per cent higher than at Amsterdam’s rival Schiphol hub, something it claimed indicated superior planning. In Frankfurt, the operator of the airport has also reduced the number of take-offs and landings to stabilise operations during the peak summer period.