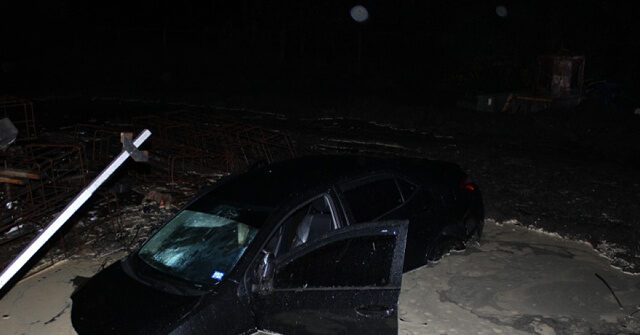 A few minutes after 1:00 a.m., a car with two adults and a child were involved in a single-car accident, and the vehicle ended up in the “sludge pit” of a construction zone, the Kenner Police Department explained in a social media post on Sunday.

Thanks to motorists’ 911 calls, Officer Clarence Carr responded in minutes and found the car sinking in the sludge. When he realized there were people inside, he went into the sludge and called for assistance:

Posted by KennerPolice on Sunday, December 4, 2022

While he began helping the people out of the car, water was pouring into the vehicle, which was sinking fast, the department’s post continued:

Officer Carr had to cut one unresponsive passenger from the vehicle. Officer Carr was assisted by Officers Hermann, Lawler, Washington, Varela and firefighters from the Kenner Fire Department who also went into the water and helped move the passengers out of danger. All occupants were transported to University Medical Center and were stabilized.

In November 2021, a similar instance happened in Hartville, Ohio, when an officer rescued a woman trapped inside her sinking car when it crashed into a retention pond.

This past Sunday morning, at about 9:30am, Officer Ken Hanket was driving down Sunnyside when he saw a white vehicle drive left of center, go over an embankment and create a large splash. This happened in front of the Gentlebrook complex and the vehicle had driven into the retention pond located there and was now partially submerged. Officer Hanket was there within 5 seconds of the vehicle and driver entering the water and he was in the water next to the driver before she knew what had happened. Officer Ken Hanket called for EMS and kept the driver calm while summoning other necessary resources and eventually convinced the driver to walk with him to the shore. They walked slowly together, in the very cold and slippery, nearly waist deep water, to the awaiting ambulance. I always talk about our “average response time” but watch the (partial) cruiser video, you too will see the splash. His response time was instant! Well done Ken! As often happens, Ken did not start out his day planning to do something heroic, but he did not hesitate when heroics were needed. Honestly, he did not pause long enough to assess whether the vehicle was stable or could sink further, he did not know or think about the depth of the water, he saw a driver in distress and he acted, as we expect him to do. Never-the-less, his actions significantly reduced her danger and significantly increased his, clearly a heroic act! Now, I would be remiss if I didn’t tell you the rest of the story. Ken was cold and wet. Since we have no lockers and no locker room, Ken had to drive home to change, He had been in waist deep, very cold water for more than 5 minutes and he didn’t get the warm blankets and the ambulance ride that the other individual got, he had to drive home, strip outside and then begin to warm himself up. Fortunately, he does plan for the unexpected and he had extra work boots and a full uniform at ready at home and we only lost his services for about an hour and a half. Think about what a decent facility would have meant to this hero on this day. Even though he had no idea who was driving the car, he risked everything for the driver. He did not hesitate then and he is not complaining now. Please read my past posts, this is the type of officer that patrols Hartville all day, everyday. Citizens of Hartville, how do you say thank you for this type of service? Does it even deserve your appreciation? When does his safety and comfort become important enough for you to go out of your way for him? We don’t ask for much, just a safe and efficient building to work in. If you read what I have written today, it is very obvious that we see you, we hear you and we care. What is not clear, is whether there is reciprocity, from any more than the few who normally comment and like this page. There will be a meeting of the Hartville Village Council Finance Committee on November 30th at 5:30pm to discuss the police facility. If you care, try to be there, I promise you won’t have to risk your life and wade into waist deep, very cold water to save us! GOD Bless

“Officer Hanket was there within 5 seconds of the vehicle and driver entering the water and he was in the water next to the driver before she knew what had happened,” authorities said.

More recently, police in Aurora, Illinois, rescued a little boy who fell into an icy retention pond at an apartment complex and saved him and the woman who was trying to help him.

TWO OFFICERS INJURED RESCUING A DROWNING CHILD Just before 4:30p.m. on Wednesday, Aurora’s 911 Telecommunications Center received reports of a 9-year-old drowning. Aurora Police officers and Aurora Firefighters were dispatched to the scene. When officers arrived, they found a 9-year-old boy who had fallen through ice and an adult woman who had gone in to attempt to save the child. Officers were able to determine the 9-year-old had entered a frozen section of a retention pond in attempt to retrieve their football. When the 9-year-old entered the frozen section of the retention pond, he fell through the ice into the cold water. Multiple officers deployed water rescue kits while two officers swam to save the drowning child and the adult female who were in the water. In a combined effort, officers were able to safely return to land with the child and the woman. The child sustained minor injuries and was transported to an area hospital by the Aurora Fire Department. Two Aurora officers who swam to rescue the child sustained minor injuries and were transported to an area hospital by the Aurora Fire Department. The female adult was treated on scene and was not transported. Everybody was released from the hospital in stable condition.

Meanwhile, social media users praised the first responders in Kenner for rescuing the individuals, one person writing, “Brave men and women. Prayers for their safety always.”

“Well Done!!! You all always make us so proud,” another commented.

The big names in the fray in Phase 2

‘Here Lies The Once Great Sport That Despised Youth Involvement’