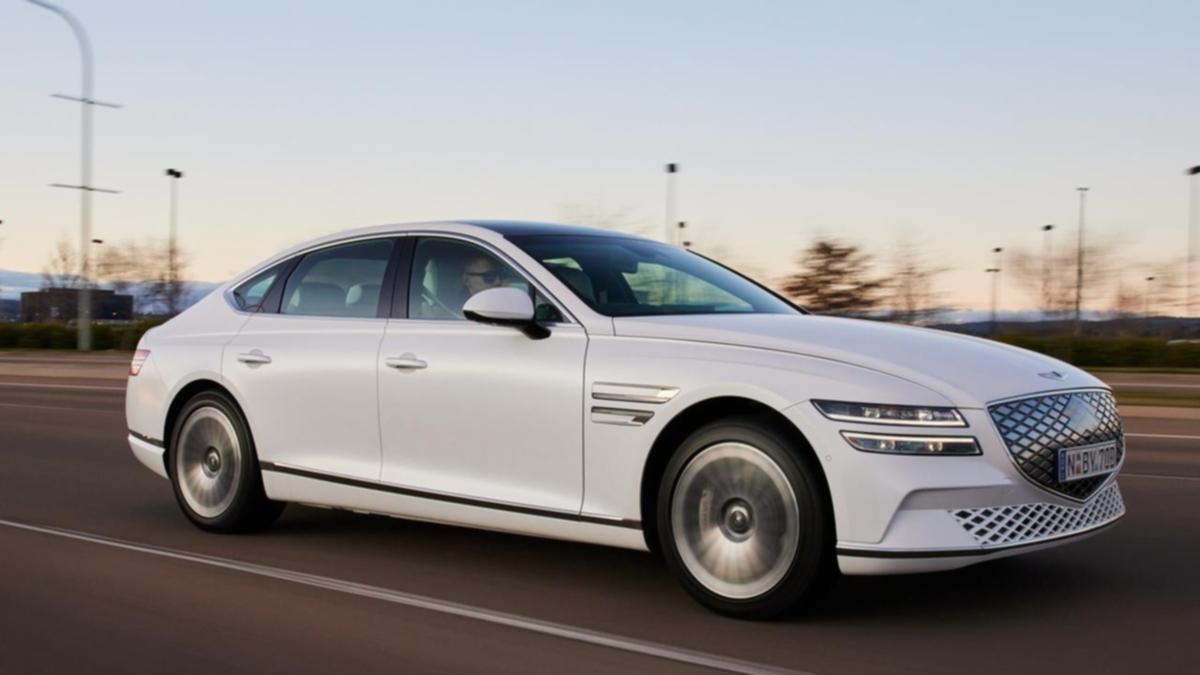 There’s a wonderful old Rolls Royce advertisement which first aired in 1959 that remains one of the most successful ads of all time.

“At 60 miles an hour the loudest noise on this new Rolls Royce comes from the electric clock,” reads the ad. “Well,” comes the rejoinder, “We’d better get a quieter clock.”

For a marque that built its towering reputation on peerless attention to detail, it was a simple statement but an unforgettable one – nothing is more refined than a Roller.

Many have tried, mind you, most notably its British rival Bentley; German giant Mercedes-Benz and, more recently, Japan’s plush Lexus range. But still nobody has matched the vehicle that’s synonymous with excellence and refinement.

Which brings us to this car, the Genesis Electrified G80.

No, it’s not a Rolls Royce, nor does it aspire to be. But it’s as close to a Rolls as any Korean vehicle has managed to get so far.

And this one, built in Korea but designed in Germany (the Russelsheim Roller, perhaps) isn’t making a big noise about it. No noise at all, in fact.

Few brands have committed as much resource into EV technology as the Koreans – showcased by Hyundai’s futuristic Ionic5 and cousin Kia’s EV6 – both electric from the ground up.

Genesis has joined the fray. Already one of the most impressively posh vehicles we’ve tested this year, the Electrified G80 takes passenger serenity to new heights.

So, having all but matched the European models for style and comfort, Genesis has decided to add one more European-style feature – the price tag.

This Electrified G80 costs $145,000 before on-road costs, making it not only the most expensive Genesis model, but the most expensive Korean car of any description – by almost $50,000. Forgo the emissions-free drivetrain and you could pay as little as half as much as the flagship.

That’s a bigger “EV premium” than you’ll pay for virtually any electrified model on the market. Even the biggest Euro makers charge about $20-$25,000 to upgrade from fossil fuels to electric – but the G80 doubles that.

But there’s at least a couple of reasons why.

Firstly, the EV version of this big, handsome sedan is demonstrably better, markedly so, than the petrol-powered models previously tested, as impressive as those cars are.

And even with that $50k burden hanging around its neck, the G80 still represent decent buying.

Curiously, one of the G80’s closest competitors, price-wise, is the stunning all-electric Porsche Taycan, which will cost you about $160k for the fully-electric, entry-level model. Surely the only time that potential buyers are asked to compare a Korean car to a Porsche, at roughly the same price.

But get this: The Electrified G80 also has almost identical performance numbers as the basic Taycan (0-100m/h in 4.9 seconds) – as well as more cruising range (about 525km) and a longer list of features. The Porsche, though, is a Porsche. With a Porsche badge on the bonnet. Enough said.

Still, the twin-motor propelled Genesis boasts 272kW of power and 700Nm of torque, which make it a delightful and deeply responsive thing to drive.

So if you can overlook the brand snobbery, this car compares pretty favourably with any luxury item on the market.

The cockpit is smart and contemporary.

We’re also lukewarm about the centre console, most notably the rotary gear-shifter (not too bad) and the beautiful, but impractical, circular rotate-and-click controller for the main function screen. Just trying a bit too hard.

But mechanically, and dynamically, are where this electric machine really shines. The previously tested 2.5-litre turbocharged, four-cylinder variant, with its perky performance and very tempting $85-grand price tag, was a pleasant surprise – particularly that a biggish machine with a smallish engine felt quite so frisky.

This time the four-cylinder has given way to the instant thrust, the dazzling acceleration and the quiet smoothness of the electric system which turns the G80 into a different vehicle altogether.

The limo-like rear seats (Luxury model) have a fold-down centre console with controls for back seat functions that include heating and ventilation, adjustment and massage, electric privacy shades, 20-speaker audio and climate-control settings. They also allow you to tune the little TV screens attached to the rear of the front-seat headrests, although those will be devoted to entertaining the kids in most families.

It looks and feels a million bucks – quiet, stable, massively comfortable and with enough intrigue to earn many admiring looks and “what’s that” calls.

So can it compete in the $150k price range against the best that Europe has to offer? Quite possibly.

Even more so, the people at Toyota – still hanging onto petrol-electric drive rather than fully embracing pure electric – had better give their luxury models a once-over pretty darned quick.

There are more Electrified Genesis models on the way, including the funky, GV60 – the first electric-only model the luxury brand has built. We’ll be testing it here early in the new year.

As for Rolls Royce? Well, they’re expected to unveil their first all-electric models within the next 12 months. Not that they’ll be particularly concerned about the Genesis.

Unless, of course, that clock starts playing up again.

* HOW BIG? Technically a mid-sizer, it looks bigger than what we’ve come to expect from full-size machines both inside and outside. Cabin space is more than adequate.

* HOW FAST? The electric motors squirt the big Korean to the speed limit in a very frisky 4.9 seconds – a time which once was celebrated by cars like a BMW M3.

* HOW THIRSTY? It takes slightly less than $10 to recharge a G80 overnight via your wall socket. That is a pretty cheap way to travel about 525km.

* HOW MUCH? The Electrified model is offered for a snappy $145,000 plus on-road – a fair leap from the entry-model which starts from $84,900 plus on roads. A few luxury addition packs will tempt most buyers.