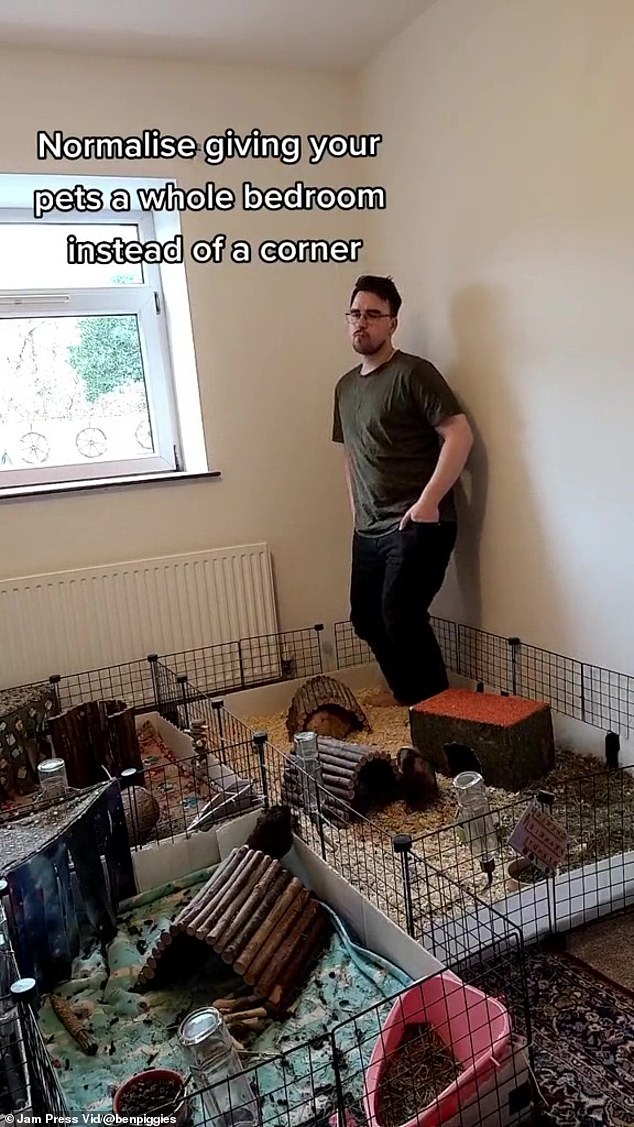 A man with five guinea pigs has dedicated a full room in his two-bedroom flat to his ‘furry potatoes’- and even upsized his home to make space for them.

The guinea pig-mad AV technician admits he spends around £1,000 a year on caring for his furry friends since he ditched their hutches and gave them the second bedroom in his house to roam around in.

Ben Males, an AV technician from Wales, has created an enormous den for his guinea pigs using one of the two bedrooms in his house. 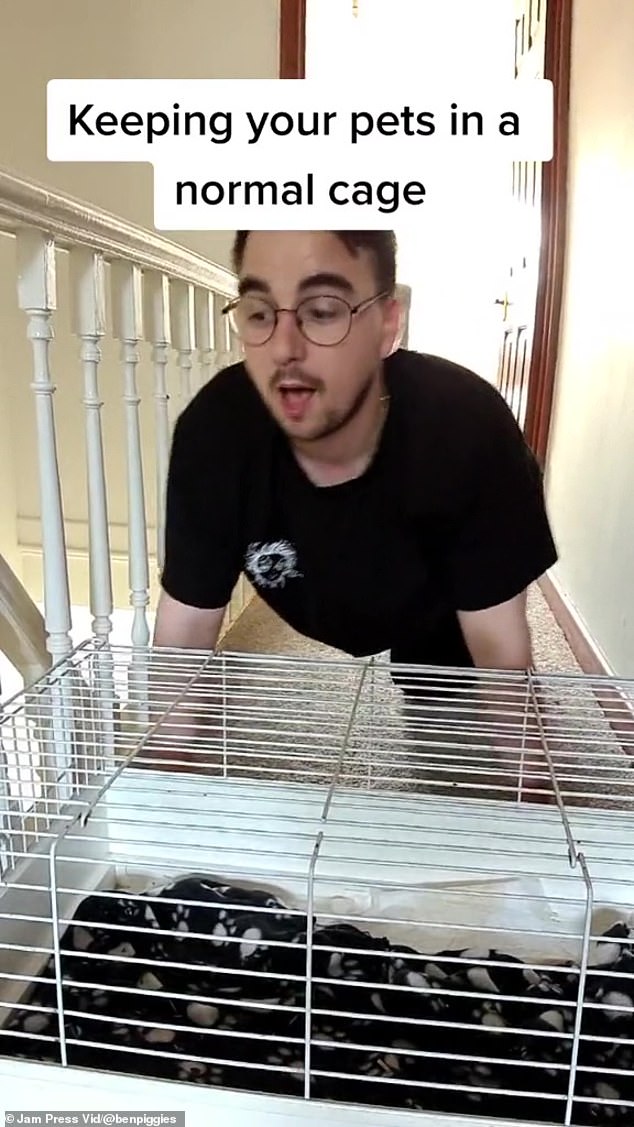 Ben, 26, decided to give his guinea pigs a whole room to roam around in after he and his fiancée Zoe upsized their flat 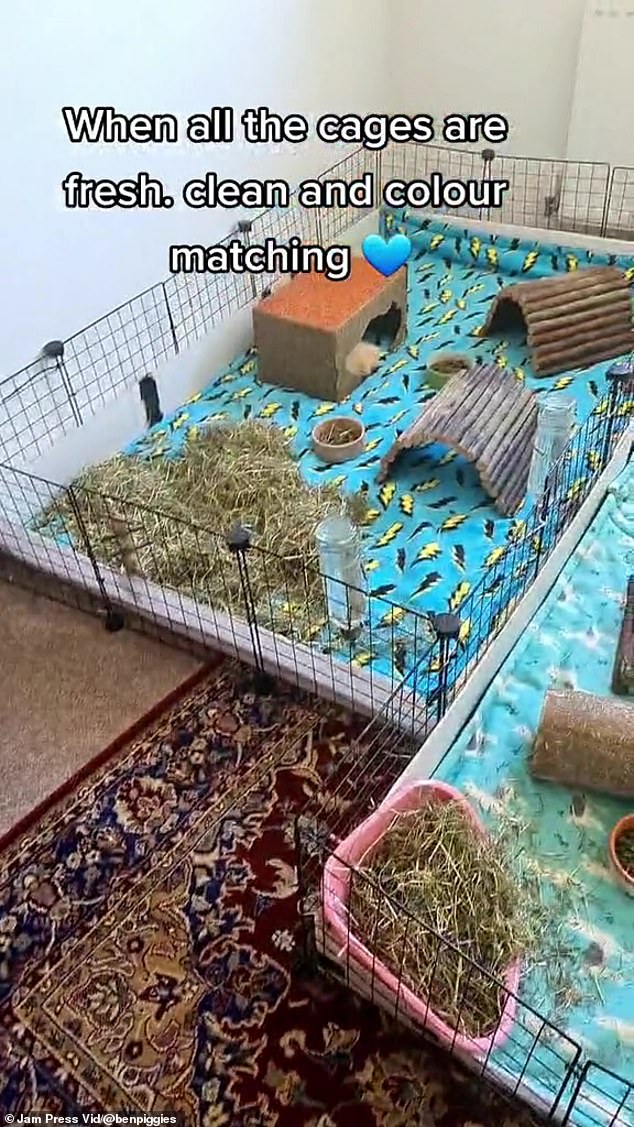 Ben, 26, cleans out the room regularly and ensures the guinea pigs have access to clean facilities

‘It’s quite a bit to spend on them, but as I’ve bought reusable bedding [online] this can help to reduce my costs later on.

‘It’s really hard to put a price on quality of life and I’ve spent this much because pet store cages are cruel.

‘Even the largest ones in Pets at Home are the bare minimum and I thought this wouldn’t do.’

Ben explained that after researching how to give guinea pigs optimum care, he realised cages are far too small for them. 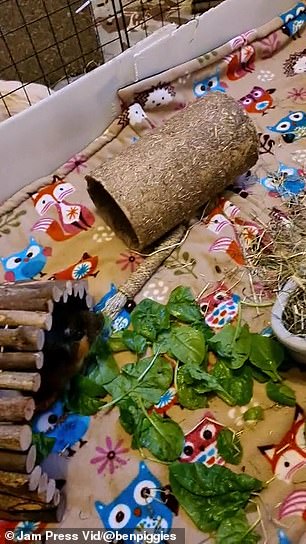 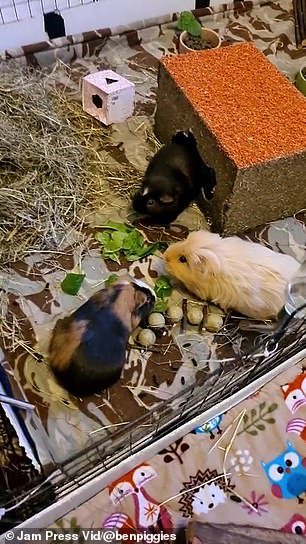 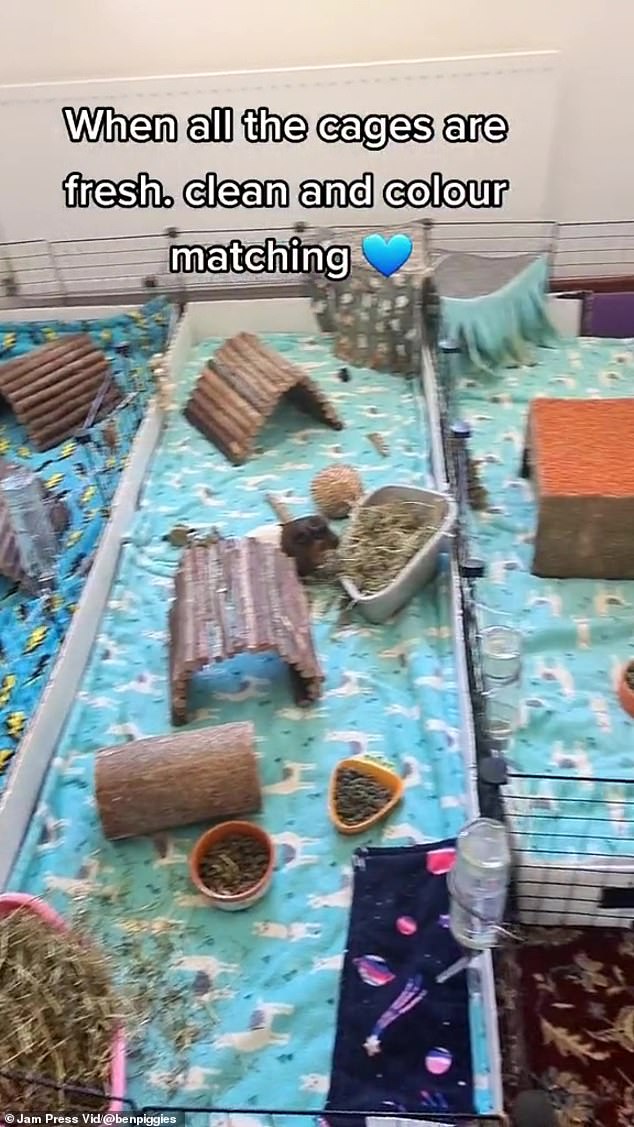 Ben spends lots of time and money caring for his guinea pigs – estimating he forks out £1,000 on them every year

When he and his fiancée Zoe bought a bigger flat, Ben saw an opportunity to give his beloved pets all the space they needed.

And when lockdown hit, Ben decided to document his guinea pigs’ adventures through his TikTok account, @benpiggies.

Since he started the account Ben has racked up 49,000 followers on his adorable videos.

One video in particular shows Ben standing in the middle of the guinea pigs’ enclosure as they run around his feet, which has been viewed 366,000 times.

After sharing the lives of his spoilt-rotten guinea pigs on the platform, people have commented on his videos to say they treat their pets in a similar way too – while others think he is over-the-top.

‘I wish I had a three-bed house, not for kids but Guinea babies. Got my priorities right,’ said one user.

Ben has a mixed reaction to his guinea pigs’ spoilt lives online with some people saying they want to treat their pets in a similar way, while others are in disbelief

‘I can’t afford it for my pigs but I agree,’ added another.

One person commented: ‘I’m literally moving into a new apartment so I can give my piggies more space.’

Other users shared their thoughts on giving animals a whole bedroom.

‘Bigger room than I had growing up,’ said another user.

‘I guess most people just don’t have room,’ said one user.

One person sarcastically commented: ‘Ok I’ll buy a mansion for them too while we’re at it.’

Despite mixed responses to his guinea pigs’ lavish lifestyle, Ben is using his large platform to spread the message that animals should not be kept in cages.

He said: ‘They live up to seven years in this one space, it’s like imagining living in a box room as a studio flat.

‘People should certainly look at sizing up their set ups for sure, as at the end of the day, that cage is the pet’s whole home.

‘The benefits to your pets’ lives are astronomical – it can help prevent medical conditions such as heart disease which in turn makes for much cheaper vet bills.

‘Honestly, the bigger the better.’

He argued that, despite receiving negative comments online, he’s doing the right thing for his guinea pigs – and suggested people wouldn’t respond negatively if he was doing the same for a dog.

‘My mum used to have a dog room and I see these things as normal,’ he said.

When Ben has visitors, he is sure to let them know there is a room in his house dedicated to guinea pigs so they’re not susprised.

He said: ‘I have a room full of tiny furry potatoes, it doesn’t get much better than that – it’s like I have my own petting zoo.

‘I go to bed knowing they have a great set up and I’ve been told it’s inspired so many people to re-evaulate their care.

‘Improvements never need to be expensive and it’s all about doing what you can, with the resources you have.

‘There’s a hundred different ways to look after a pet in the best possible way.’

CDC shuts down its COVID-19 program for cruise ships