Mariners select high school shortstop Cole Young with No. 21 pick in first round of 2022 MLB draft 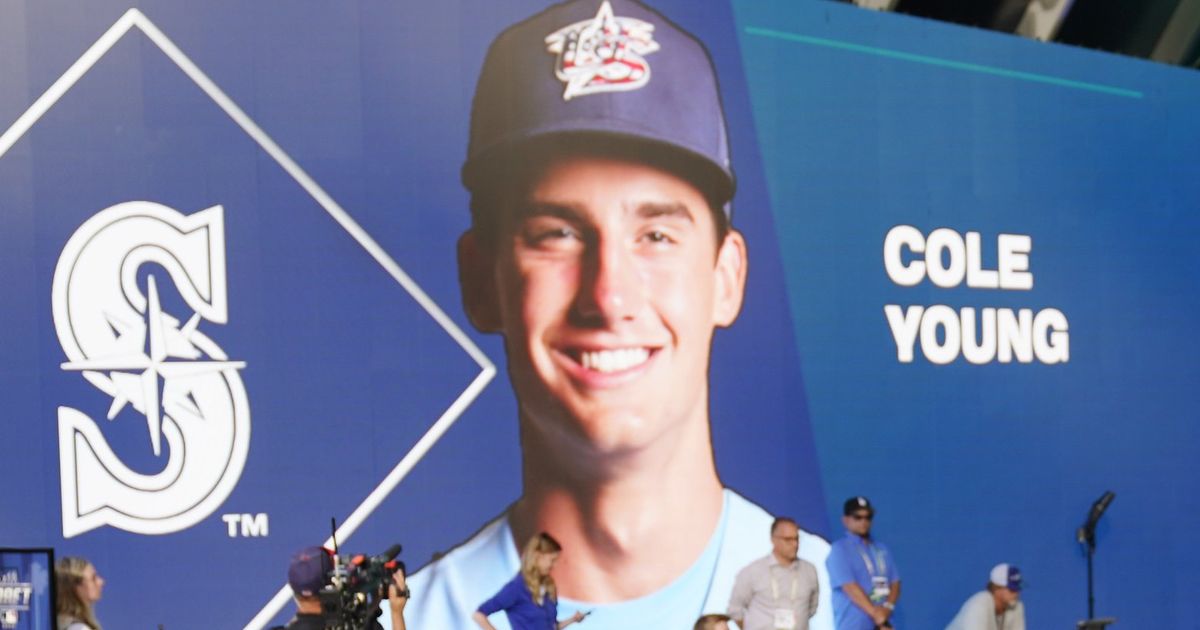 The Mariners began Sunday afternoon taking care of the present, extending their win streak to 14 with a victory at Texas, before the focus shifted to their future with the first day of the MLB draft.

Seattle selected shortstop Cole Young from North Allegheny High School in western Pennsylvania with the No. 21 overall pick in the first round.

Young, 6-0 and 180, hits left-handed and throws right-handed. He hit .428 for his career at North Allegheny High with 11 home runs, but he really elevated his status in the summer showcase circuit in 2021.

Scott Hunter, the Mariners director of amateur scouting, said “we believe he is one of the purest hitters with the best swings in this draft.”

“We’re not just getting a good hitter, we’re getting a darn good baseball player,” Hunter said. “He plays (shortstop) really well, and probably has the versatility to play at second or third. But the bat is what impressed us, as well as his makeup on and off the field.”

Hunter went to Wexford, Pennsylvania, to meet Young, 18. After watching two swings in the batting cage, he sent a text to Mariners general manager Jerry Dipoto.

“I remember texting Jerry and saying, ‘This is an easy one,’” Hunter said.

“Cole does everything well,” Dipoto said. “I’ve seen reams of video on him. … We thought throughout that he was going to be in the crosshairs of our pick. We did a ton of work on him … and we are just comfortable with him.

“He kind of checked every box for us, and to get him with the 21st pick was really fortunate.”

Young was ranked as the No. 14 prospect by Baseball America, which said this about the Mariners first-round pick:

“Young separated himself over the showcase circuit as one of the best shortstops in the 2022 class with arguably the best hit tool of anyone not named Termarr Johnson. … Young doesn’t jump off the page in terms of tools and might not have a single plus tool outside of his bat. That said, he does everything on the field well and could have average to above-average tools across the board, with no obvious weakness in his game beyond power.”

Young’s lowest grade from Baseball America was his power, but the Mariners think he will develop that.

“There is power in there, but he doesn’t sell out for it,” Hunter said. “… You take the hitter first and the power always surprises you. This kid has raw power, but this is a kid that doesn’t give up at-bats. He uses the whole field and would rather take a line drive than sell out for power.

“But we do think with the maturity of his bat, he will be exceeding his power grade.”

Young agreed that he would get stronger and gain more power.

“I am not even close to where I can be,” said Young, who elected to stay home with friends and family in Pennsylvania for the draft rather than traveling to Los Angeles for the official proceedings. “I am just trying to get better overall.”

It is the second straight year the Mariners have selected a high school player in the first round after taking catcher/outfielder Harry Ford in 2021.

Ford was the first high school player taken by Seattle in the first round since Alex Jackson in 2014.

“It’s just the talent; we have to take the best players up high,” Dipoto said.

The Mariners went back to the college ranks to select Locklear, a redshirt sophomore coming off a great season at VCU. He hit .402 with 20 home runs in 224 at-bats. He had 47 walks and just 25 strikeouts.

Locklear was ranked the No. 99 prospect by Baseball America.

“He tested off the charts at the MLB combine last week, which was great information,” Hunter said of Locklear, who has been compared to Mets slugger Pete Alonso. “It is top-of-the-scale power.”

Locklear said his preference is to play at third base, and Hunter said Locklear would get every chance to stay there.

The draft was considered wide open after about the top several prospects.

Two high school players whose fathers were longtime star outfielders in the majors were taken with the first two picks of the draft.

Gonzaga pitcher Gabriel Hughes was the No. 10 overall pick by the Colorado Rockies.

Hughes, who graduated in three years, saw time as a hitter and pitcher with the Zags as did another former first-round pick from Gonzaga: Mariners pitcher Marco Gonzales.

Bainbridge High School pitcher JR Ritchie was taken at No. 35 overall by the Atlanta Braves in the competitive balance picks between the first and second rounds.

Ritchie has a fastball in the upper 90s and signed a letter of intent to play at UCLA.

There should be dialogue in Parliament with an open mind, says PM Modi ahead of Monsoon Session-Politics News , Firstpost