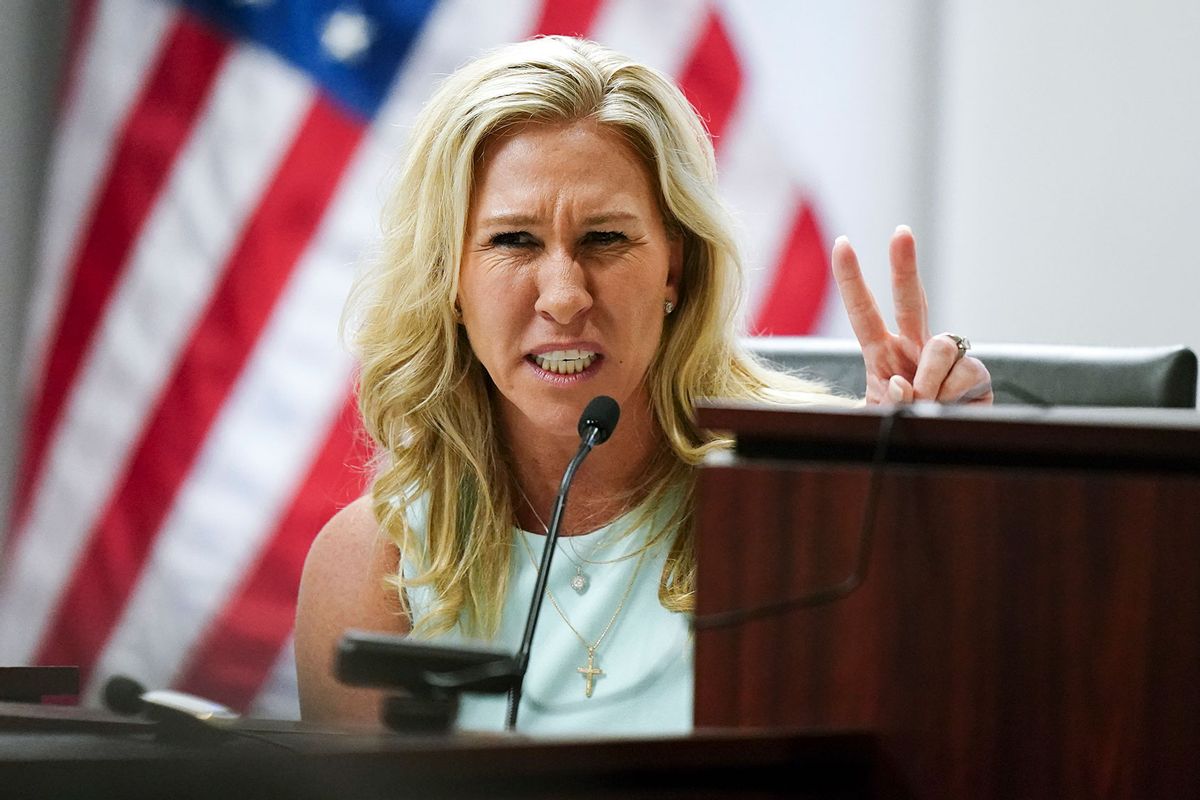 Far-right Rep. Marjorie Taylor Greene of Georgia set off yet another controversy when, during a Saturday, July 23 interview conducted at the Turning Point USA Student Action Summit in Florida, she proudly described herself as a “Christian nationalist” and urged the Republican Party to openly embrace an ideology of “Christian nationalism.” One of the people who is calling Greene out is Amanda Tyler, executive director of the Baptist Joint Committee for Religious Liberty (BJC) and the main organizer for Christians Against Christian Nationalism.

Greene told Taylor Hanson of the right-wing Next News Network, “We need to be the party of nationalism, and I’m a Christian. And I say it proudly: We should be Christian nationalists. When Republicans learn to represent most of the people that vote for them, then we will be the party that continues to grow without having to chase down certain identities or chase down certain segments of people.”

In an op-ed published by CNN’s website on July 28, Tyler lays out some reasons why she finds Greene’s “Christian nationalist” talk incredibly dangerous.

“For years, I have been closely tracking Christian nationalism and sounding the alarm about it,” Hanson explains. “Greene’s recent comments mark an alarming shift in the public conversation about Christian nationalism. Until recently, the public figures who most embrace Christian nationalism in their rhetoric and policies have either denied its existence or claimed that those of us who are calling it out are engaging in name-calling. But Greene is evidently reading from a different script now, explicitly embracing the identity as her own and urging others to join her.”

Tyler continues, “She is not alone in doing so. Greene’s embrace of Christian nationalism follows closely after troubling remarks from Colorado Republican Rep. Lauren Boebert: ‘The church is supposed to direct the government, the government is not supposed to direct the church,’ she said at a church two days before her primary election and victory in late June. ‘I’m tired of this separation of church and state junk.'”

Tyler describes Christian nationalism as “a political ideology and cultural framework that merges Christian and American identities, distorting both the Christian faith and America’s promise of religious freedom.”

“Though not new, Christian nationalism has been exploited in recent years by politicians like former President Donald Trump to further an ‘us vs. them’ mentality and send a message that only Christians can be ‘real’ Americans,” Tyler observes. “Growing support for Christian nationalism comes at a time when the political ideology behind it poses increasingly urgent threats to American democracy and to religious freedom. Perhaps the most chilling example of Christian nationalism came on the most public of world stages, from some Trump supporters during the January 6 insurrection.”

On February 9, BJC published a disturbing report that details the role Christian nationalism played in the January 6, 2021 insurrection.

“I care about dismantling Christian nationalism both because I’m a practicing Christian and because I’m a patriotic American,” Tyler writes. “And no, those identities are not the same. As Christians, we can’t allow Greene, Boebert or Trump to distort our faith without a fight.”

Watch Greene’s July 23 interview with Next News Network below:

Why we wrote a guide on Peter Obi – ADF