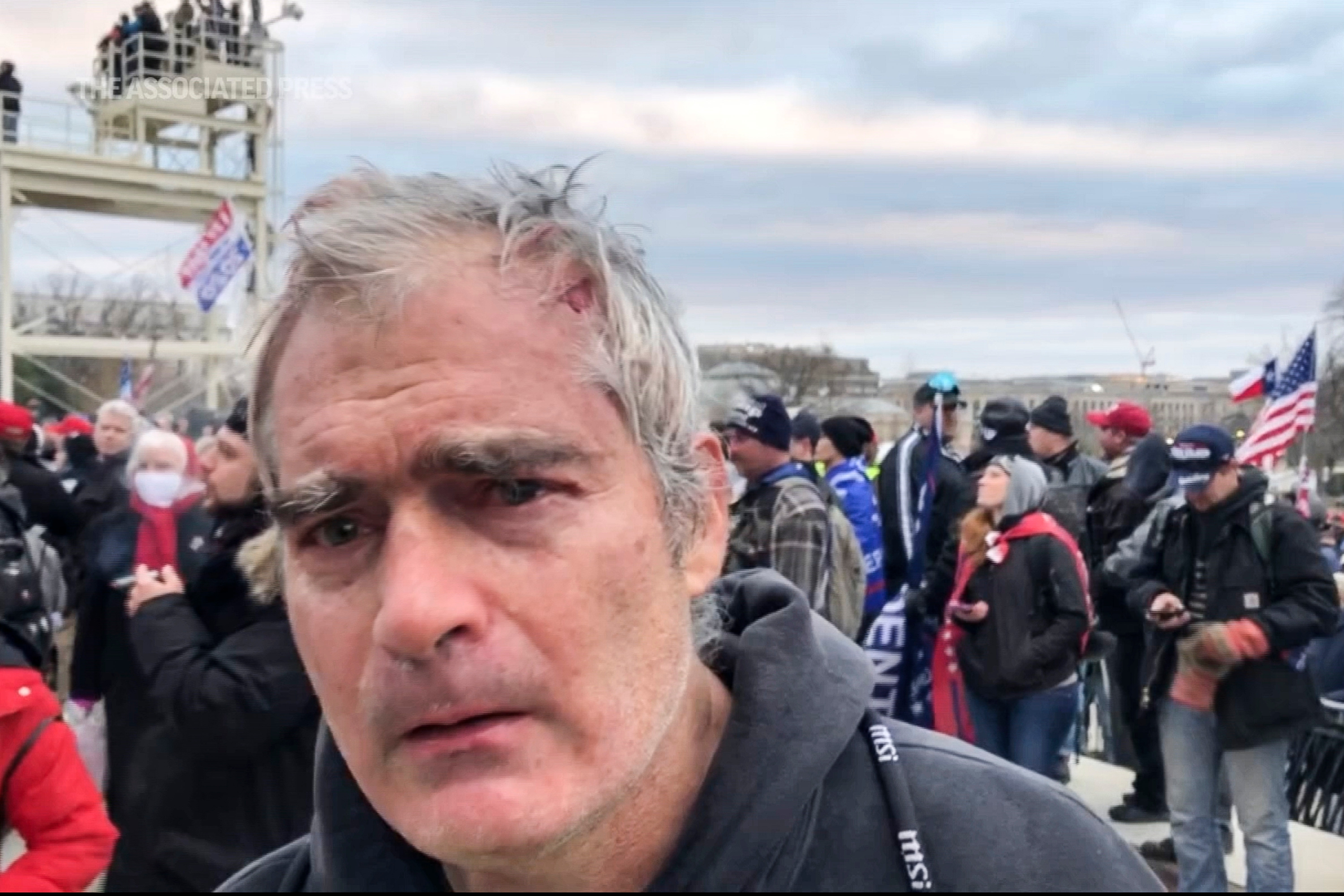 The son of a well-known American painter was convicted Friday for his role in the Jan. 6, 2021, protests at the Capitol in Washington, D.C., the Associated Press reported.

The Athol, Mass. native was interviewed by the AP during the attacks that day and the video was used as evidence in the trial against him. In the video, a flushed Gillespie is seen outside the Capitol speaking defiantly about his role in the attacks. He also expressed disappointment that more like-minded individuals didn’t show up to the Capitol.

“We were almost overpowering them,” Gillespie told the AP with blood visible on his scalp. “If you had like another 15, 20 guys behind us pushing I think we could have won it.”

FILE – This image from video recorded Jan. 6, 2021, captures Vincent Gillespie on the grounds of the U.S. Capitol in Washington, where prosecutors say he was among a rioting mob trying to gain control of the building from the federal government.
(AP Photo/Ben Fox)

Investigators said the video of Gillespie, along with security video from the Capitol and police body cameras, showed him push, yell at and fight with police defending the building. At one point, Gillespie reportedly took a police shied from an officer and used it to ram other officers.

The US Department of Justice said Gillespie also grabbed a Metropolitan Police Department sergeant by the arm and yanked him toward the mob and screamed “traitor” and “treason.”

Gillespie testified in his defense during the trial, which began Monday, with jury deliberations taking place on Thursday and Friday.

“By testifying in his own defense, I think he tried to muddy the waters and that only added to jury deliberation time,” Christoff said, citing “overwhelming” photographic and video evidence against the man.

MASSACHUSETTS EX-TOWN OFFICIAL SENTENCED TO 15 DAYS IN PRISON FOR ROLE IN JAN. 6 PROTEST

Former U.S. President Donald Trump is displayed on a screen during a meeting of the Select Committee to Investigate the January 6th Attack on the U.S. Capitol in the Canon House Office Building on Capitol Hill on Dec. 19, 2022, in Washington, DC.
(Al Drago/Getty Images)

Gillespie was seen outside the Capitol building pouring water into his eyes after he and others were hit with chemical spray when they tried to storm the building by busting through an opening.

“I was with some other guys, and then we were starting to push against them, and they were beating us and putting that pepper spray stuff in your eyes. But there were a bunch of people pushing behind us,” Gillespie told The AP.

He also said they were “very (expletive) close” to getting through the doors and hoped the people storming the building “would flood in so there was nothing they can do.”

“That’s what I would hope they would do. Take it over. Take it over. Own it for a few days. I’m not an anarchist, but you can’t let stand what happened in this election,” Gillespie said in an apparent reference to former President Donald Trump’s claims the election was stolen.

Gillespie’s identity was tipped off to authorities through a former neighbor and town employees in Athol. Six people independently identified him from pictures taken during the riots, the AP said.

He is the son of postwar American artist Gregory Gillespie, whose self-portraits, fantasy landscapes and geometric abstractions are included in the collections of the Metropolitan Museum of Art, the Whitney Museum of American Art, the Museum of Fine Arts in Boston and other museums.

His sentencing is scheduled for March 17. He is one of nearly 900 people arrested in almost all 50 states in connection with the Capitol protests.

The virus behind COVID-19 is mutating and immune-evasive. Here’s what that means

Parliament returns — with a lot of ‘unfinished business’ on its plate