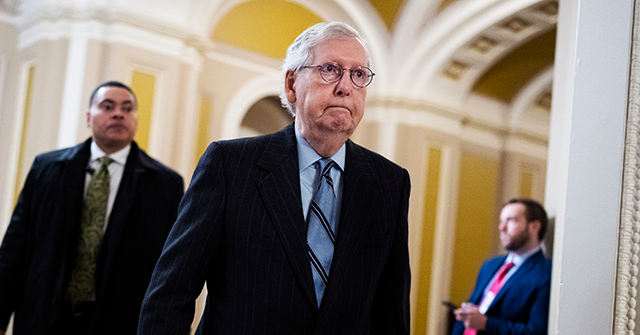 McConnell, 80, will remain the Republican minority leader in the 118th Congress and thus eclipse the late Sen. Mike Mansfield’s time as Democrat leader from 1961 to 1977.

McConnell overcame ten Republican “no” votes in November to remain minority leader. The votes against McConnell marked the first time McConnell had received a “no” vote as leader, a sign the GOP has begun to turn against his establishment agenda.

“I don’t own this job,” McConnell claimed after the vote. “Anybody who wants to run for it can feel free to do so.”

At noon, McConnell will deliver a speech on the Senate floor celebrating the moment. According to Punchbowl News, his address will read in part:

Designated party floor leaders have been a feature of the Senate for more than a hundred years. And no two have done the job exactly alike… [T]here’ve been leaders who rose to the job through lower-key, behind-the-scenes styles; who preferred to focus on serving their colleagues rather than dominating them. And that … is how Senator Michael Joseph Mansfield of Montana became the longest-serving Senate leader in American history until this morning.

McConnell’s historic moment comes as he worked against conservatives in 2022.

McConnell’s political position has remained consistent over time, which has infuriated many of his critics. Under McConnell’s Senate leadership, the national debt has risen by nearly $20 trillion, illegal immigration has continued, and real wages for American workers have not grown. Obamacare was enacted in 2010. Big banks were bailed out in 2008, and social media companies have silenced individuals without repercussions.

Grubhub agrees to pay D.C. and customers $3.5 million over fees and transparency