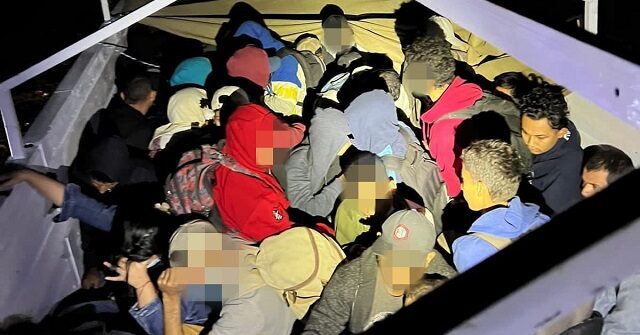 Federal agents of the National Migration Institute (INM) of the Ministry of the Interior apprehended 266 migrants in three tractor-trailers in Nuevo León on Tuesday morning, according to a statement released by the Government of Mexico.

Early Tuesday morning, Mexican officials received information about a group of migrant children and adults being transferred in Torton-type trucks. Police from the municipality of Galeana, Nuevo León, began a search for the trucks.

Officers stopped three trucks and began inspections after finding one with no license plate, officials stated. The officers heard voices coming from the trailer and detected rustling sounds. When they opened the trailers, the officers found the migrants on their knees and sitting cross-legged on planks that formed a second floor.

State, local, and federal law enforcement officials, including the Mexican National Guard, participated in transporting the 266 migrants to the Galeana Municipal Auditorium for processing.

Coordinated efforts of Del Rio Sector & the Government of Mexico an 18-Wheeler carrying 150 migrants traveling towards the U.S. was successfully interdicted.
This has proven to be a deadly tactic that smugglers use.
Luckily no one in this large group needed medical assistance. pic.twitter.com/gDMD1ZLiST

The tactic of loading migrants into these potential death traps is not new. Breitbart Texas reports extensively on the use by Mexican cartel-connected smugglers to move migrants into the U.S. interior. These smuggling efforts can have deadly consequences.

Why September is a better time to make goals than January