Mexico bans smoking in all public places, including beaches and hotels – National 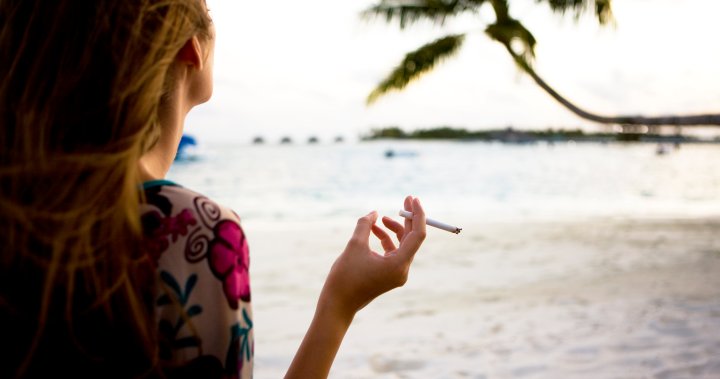 If you’re a tourist who dreams of unwinding with a cigarette on a vacation to Mexico, that fantasy is about to go up in smoke.

On Sunday, Mexico enacted one of the world’s strictest anti-tobacco laws, completely banning smoking in all public places, including hotels, parks and beaches.

The total ban, which is part of Mexico’s General Law for Tobacco Control, also forbids the advertising, sponsorship or promotion of any tobacco products. Restrictions for the sale and use of e-cigarettes and vaporizers were also created, though they mostly focus on indoor usage.

The measure, which was approved in December 2022, comes as an extension of an existing law from 2008 that prohibited smoking in indoor spaces like restaurants and other businesses. The Pan American Health Organization (PAHO) praised the move for its attempt to prevent and control chronic non-communicable diseases to do with tobacco use.

In a single year, 10 per cent of all deaths in Mexico are attributed to tobacco use or exposure to tobacco smoke, the PAHO wrote in a statement. The rate of daily tobacco use in the country has “remained virtually consistent” since 2002.

“Bravo #Mexico! @WHO welcomes such a bold move on tobacco control,” he wrote. “We call on all countries to strengthen #NoTobacco policies and help us prevent 8 million deaths every year!”

Bravo #Mexico! @WHO welcomes such a bold move on tobacco control. We call on all countries to strengthen #NoTobacco policies and help us prevent 8 million deaths every year! https://t.co/TCoVRV6VEC

The BBC reported that some smokers are unhappy with the law that is being called “draconian,” as it essentially limits smoking to private domiciles.

Mexico is not the first country to implement such a strict ban on smoking. Ireland, Greece, Bulgaria, Malta, Spain and Hungary also have complete bans on smoking in all enclosed public spaces and workplaces.

In December, lawmakers in New Zealand voted to ban the sale of cigarettes to anyone born on or after Jan. 1, 2009. The unique plan to phase out tobacco smoking will mean that the minimum age to buy cigarettes will go up year by year.

Smoking in Canada is already banned in all indoor public spaces, on patios, on public transit and in workplaces. Every day, 100 Canadians die from smoking-related illnesses, according to the Canadian government.

Belarus’ opposition leader denounces her trial as a farce