Michelle Yeoh back in action as an elf warrior in The Witcher: Blood Origin 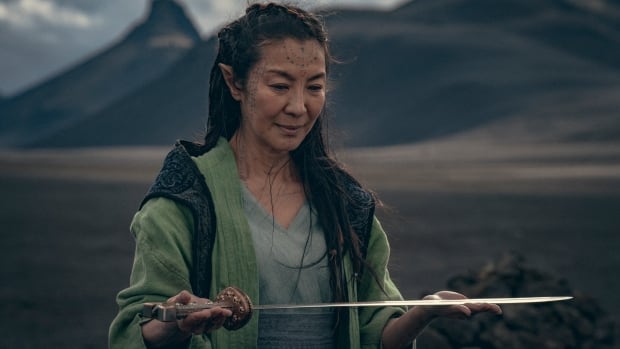 Michelle Yeoh goes full fantasy in her latest role, playing an elf-like creature with deadly sword-fighting skills in Netflix’s The Witcher: Blood Origin. But if you ask the longtime action star what it was like returning to her warrior roots, she’ll happily say: “I never left!”

It’s true. In just the last few years, the 60-year-old Malaysian actress — who became a bona fide movie star during Hong Kong’s ’90s action film boom — has made memorable turns in Marvel’s Shang-Chi and the Legend of the Ten Rings and the wildly imaginative box office phenomenon Everything Everywhere All At Once.

Whether she was playing a superhero’s martial artist aunt or a mom and laundromat owner with mad kung fu skills, she was kicking butt — a reliable element of any Michelle Yeoh performance.

A prequel to the 2019 series of the same name, The Witcher: Blood Origin is a four-episode miniseries set 1,200 years before the events of the original series. Yeoh stealthily glides into her role as Scian, an elf warrior who — after her tribe members are killed by a vengeful king — sets out on a journey to bring her ancestors to justice.

“Every action sequence depends on the character and depends on the reason of what it’s coming from,” Yeoh explained in an interview with CBC News, describing the work that goes into developing fight choreography for different characters.

“For example, Scian. She is part of the Ghost Tribe who are very well-skilled, very highly-skilled sorts — elves — and there is a reason for their name, the Ghost Tribe. It’s like they are unseen until it’s too late for you or whoever [they] have to get rid of,” she said.

WATCH | The trailer for sequel series The Witcher: Blood Origin:

Working closely with the series’ stunt coordinators, Yeoh and the team devised a plan: For “[an elf] from the Ghost Tribe, what is their specialty? Why and how would they move?”

“For Scian, everything is stealth and fast and very rapid. So this has to come [into] understanding the character that I’m playing. And with this in mind, we choreograph the way she moves.”

While the original series, now set for a fourth season starring Liam Hemsworth, was about a headhunter — referred to as witchers — in a fantasy world of monsters and humans, Blood Origin looks back to establish some of the preceding lore, including how the first witcher came to be and what led to the destruction of the elf society.

Yeoh said that her character’s deep spirituality and quest to connect with her ancestors after their demise was part of what attracted her to the show, which premiered Dec. 25 on Netflix Canada.

“She lives isolated from the rest of the world because she’s the last of her clan,” after its other members are murdered for refusing to be bribed with money, instead choosing honour, Yeoh said.

“That definitely resonated very, very deeply because I think you have to find what is the motivation of a character? You know? Why is she on this quest? And when it has such tragedy or such commitment, it makes the journey, the quest much stronger.

Former Uruguay defender Fabian O’Neill, hailed by Zidane as ‘most talented player ever’, dies at 49

Should I give this lovely garment to a more deserving bride?