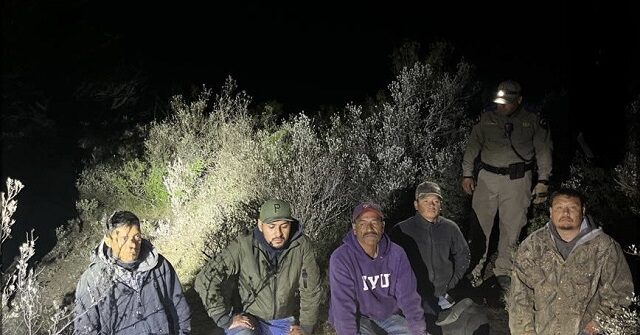 Texas Department of Public Safety troopers working brush operations in rural Kinney County utilized technology to track down a group of migrants illegally trespassing on a ranch. Near Laredo, troopers found another group using their own technology to try to avoid apprehension.

The @TxDPS brush team located 13 illegal immigrants after responding to a camera activation on a private ranch in Kinney Co. One of the groups climbed over a ranch fence in order to gain access. As of 11/17/22, troopers have made 5,655 criminal trespass arrests.#OperationLoneStar pic.twitter.com/vp032InUwQ

A surveillance camera placed on the ranch detected the group of 13 migrants as they entered the private property near the Texas border in Kinney County. One of the migrants climbed the locked fence to gain access.

Migrants frequently damage gates and fences as they attempt to avoid apprehension in their attempts to illegally enter the United States and make their way around Border Patrol checkpoints.

Olivarez reported that troopers made 5,655 criminal trespass arrests as of November 17.

Near Laredo, Texas, it was technology versus technology as DPS troopers arrested a group of four migrants for criminal trespass on a ranch near the border.

The @TxDPS brush team in Laredo responded to a camera activation resulting in the arrest of 4 illegal immigrants for criminal trespass. Further investigation revealed a set of night vision devices that were utilized for nighttime travel. #OperationLoneStar pic.twitter.com/iBwp2IPJss

DPS brush teams reacted to a camera activation on a private ranch near Laredo. When the troopers arrested the migrants, they found the migrants had their own technology. The migrants used night-vision optics to attempt to sneak further into the U.S.