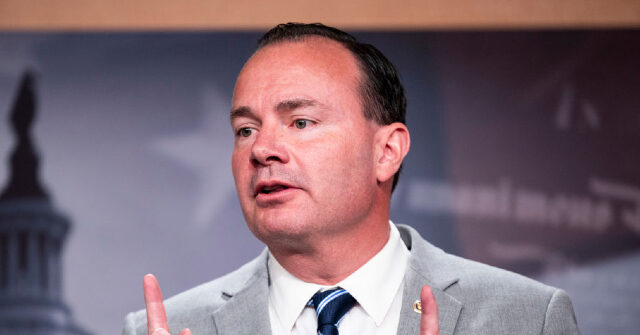 Sen. Mike Lee (R-UT) quoted a Breitbart News article to detail how the Journalism Competition and Preservation Act (JCPA) would be exploited to censor free speech.

Lee, a longtime vocal opponent of the JCPA, delivered a thorough breakdown on why the JCPA would not fix the issues ailing the news industry, why the bill may violate the Constitution, and how the bill may be used to censor free speech.

During the Senate Judiciary Committee hearing on the JCPA, Lee quoted Breitbart News Senior Technology Correspondent Allum Bokhari, who wrote that the bill would be used to censor free speech using the usual, establishment buzzwords:

These self-appointed mainstream and left-wing media cartels ARE allowed to exclude based on the usual, totally subjective, factors they always do, such as: “trustworthiness,” “fake news, “extremism,” “misinformation,” “hate speech,” “conspiracy,” “correction policy,” “expertise,” “authoritativeness,” etc.

Lee also said that the JCPA would likely violate the Constitution by compelling speech and could serve as an “Obamacare for the free press.”

“When you boil it all down, the JCPA is just a way to transfer wealth from a politically disfavored group to a politically favored one under the guise of supposedly improving competition,” Lee, a conservative who opposes the bill, said.

The Utah conservative continued, noting that the bill may violate the First Amendment by requiring publishers to compel speech.

“Setting aside the failures in concept and execution, the JCPA is arguably unconstitutional. The bill countenances no world in which a publisher can refuse to distribute the content of a publisher. In fact, doing so is prohibited, forbidden by the anti-retaliation clause. This seems to be me likely to amount to a violation of the First Amendment because it’s compelled speech.”

“How ironic for a bill to protect the only industry named in the First Amendment would do so by violating the right to free speech,” he added.

He said that this bill could amount to an “Obamacare for the free press” in that it forces internet platforms to pay for the publishers’ content.

Lee has long attacked the JCPA.

During a subcommittee hearing in February, he said that the last thing Congress should do is create a “cartel” that would ultimately benefit big media conglomerates such as the New York Times and the Washington Post.

On Thursday, Lee said that the bill should be better referred to as the “Journalism Cartel and Protectionism Act.” He said that trade groups and special interests have been writing the bill in the “shadows.”

Abe Hamadeh Calls for Ethics Investigation into the ‘Arizona Republic’

Pfaff ‘Will Not Protect the Women and Children’ in Wisconsin’