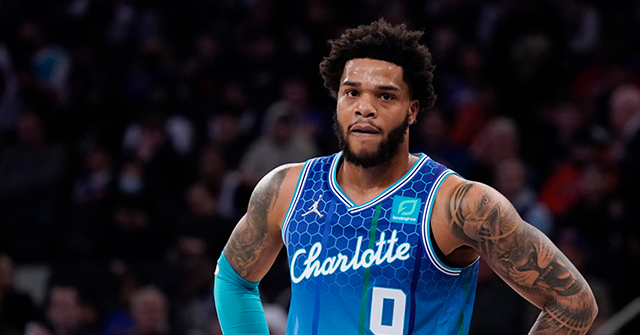 Miles Bridges is in talks with the Charlotte Hornets for a contract extension after he avoided jail time on a felony domestic violence charge for an alleged attack on his then-girlfriend this year, sources told ESPN on Friday. Bridges will face what some have predicted as a “lengthy suspension” if he rejoins the NBA, as the league is still investigating his case.

The 24-year-old NBA forward pleaded no contest to a felony domestic violence charge November 3 in Los Angeles, and was sentenced to three years of probation, with no jail time.

Bridges’ then-girlfriend, Mychelle Johnson, alleges he assaulted her in front of their two children in June, where she says he strangled her, broke her nose, and gave her a concussion, along with other injuries that she reported to police. Johnson posted pictures online of injuries she said happened during his alleged assault, saying she “can’t be silent anymore.”

Miles Bridges should not play another minute of NBA basketball. pic.twitter.com/JYYNu5y401

Bridges turned himself into Los Angeles police in July and posted a $130,000 bail. His arrest came one day before NBA free agency, where Bridges was expected to sign a contract for $100 million or more.

The Hornets plan to reach a deal with Bridges “in the near future” sources told ESPN.

Charlotte Hornets forward Miles Bridges drives to the basket against the Sacramento Kings during the first quarter of an NBA basketball game in Sacramento, California, Friday, November 5, 2021. (AP Photo/Randall Benton)

Bridges was reportedly mandated 52 weeks of domestic violence counseling, 52 weeks of parenting classes, 100 hours of community service and weekly narcotics testing, with marijuana forbidden without a doctor’s prescription. He cannot own a gun, ammunition or any dangerous weapons and will have to pay a $300 restitution fee and $500 domestic violence fine.

The Hornets said they are “continuing to monitor” the “very serious charges” against Bridges. UPI reported in July:

Bridges averaged a career-high 20.2 points, 7.0 rebounds and 3.8 assists per game in 80 starts last season for the Hornets. The No. 12 overall pick in the 2018 NBA Draft is a restricted free agent who was expected to receive major interest this off-season on the open market.

The Hornets extended a qualifying offer for Bridges before his arrest. A criminal conviction is not required for a player to receive discipline for a violation of the NBA’s domestic violence policy, and players can be placed on administrative leave while the league investigates accusations.

“We are aware of the charges that were filed against Miles Bridges,” the Charlotte Hornets said in a statement Tuesday. “These are very serious charges that we will continue to monitor. As this is a legal matter, we will have no further comment at this time.”

If an agreement cannot be reached with the Hornets, Bridges will remain a restricted free agent.

Getting vaccinated this holiday season? Here’s how to stay up-to-date on your COVID shots