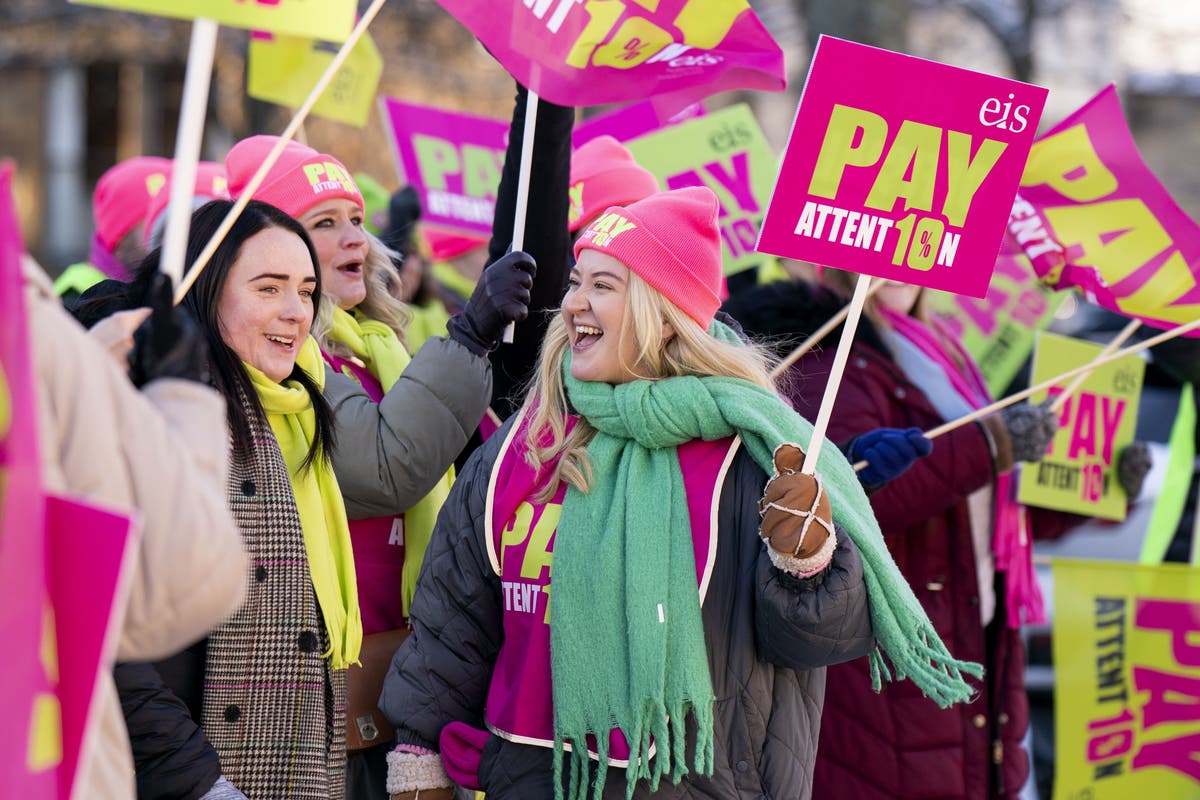 cotland’s Education Secretary has been accused of “inaction” in reaching a pay deal to end strikes by teachers.

Teachers in North Ayrshire and Perth and Kinross walked out on Tuesday amid the ongoing dispute.

It is part of the Educational Institute of Scotland’s (EIS) 16-day rolling programme of strike action, with Glasgow and East Lothian schools closed on Monday.

A further 22 days of industrial action has been announced by the union across February, March and April, if a resolution is not reached.

Education Secretary Shirley-Anne Somerville has repeatedly said the 10% teachers are demanding is unaffordable. An offer which would see most teachers receive a 5% pay increase, and 6.85% for the lowest earners, has been rejected.

In a ministerial statement on education attainment in Holyrood on Tuesday, Ms Somerville pledged to continue talks with unions later this week and called for the industrial action to be suspended.

He said: “Such is the inaction of this Cabinet Secretary that teachers have been led to do something that is against all of their natures as professionals – to take strike action for the first time in 40 years.

“The Cabinet Secretary and this SNP Government are failing Scotland’s children and young people, their parents and carers, and it just won’t wash.

Scottish Labour’s education spokesman Michael Marra said: “Teachers don’t want to be out on strike, we all know that. But it is now eight weeks since the last offer.

“There have just been 22 more days of strike action announced. What is the Cabinet Secretary going to do to change her approach to the negotiations to get the breakthrough we need, because more of the same is clearly not going to cut it.”

In response, Ms Somerville echoed comments by First Minister Nicola Sturgeon who called for “compromise on both sides” to reach a suitable agreement.

Ms Somerville said: “We are some distance apart between what is affordable to the Scottish Government and local governments and what is acceptable to the unions in terms of what they wish to see.

“(Local government body) Cosla have made four offers now to the unions. I totally accept that those have been rejected, but we need to see compromise on all sides of this.

“That’s the only way to get a resolution.”

On Monday, EIS general secretary Andrea Bradley said she was “hopeful” talks would end in an improved offer – but she stressed teachers are willing to continue to take strike action until that happens.

A yellow kitchen in Ukraine is torn open, laying bare the sudden impact of Russia’s war on innocent lives