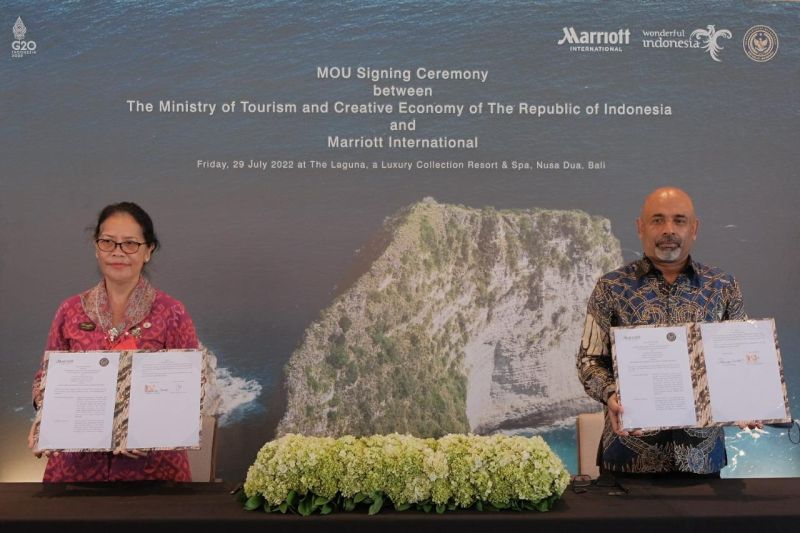 Jakarta (ANTARA) – The Tourism and Creative Economy Ministry has forged collaboration with a private company to bolster domestic tourism and the creative economy sector.

“Marriot International owns 30 brands and thousands of properties across more than 130 countries, which made it one of the biggest hotel businesses. This is closely related to the tourism industry, which reciprocates one another in its relations, and is mutually beneficial, with the tourism industry,” Secretary at the Tourism and Creative Economy Ministry, Ni Wayan Giri Adnyani, remarked after signing the memorandum of understanding in Bali, as quoted from an official statement received here on Saturday.

Her administration deemed it necessary to establish partnership with the hotel industry that has contributed significantly to the tourism sector.

The memorandum of understanding between the ministry and PT Indo Pacific Sheraton, as representative of Marriot International, encompassed collaboration in the tourism industry, destination, marketing, development of human resources, creative economy development, and others, in accordance with each entity’s task, function, and authority, which had to be valid for three years since the date of signing.

Adnyani expects the collaboration to allow students or graduates of six tourism polytechnics under the ministry’s supervision to work for many of Marriot group’s hotels that were known for their impeccable hospitality.

They also took measures to implement the ASEAN Mutual Recognition Arrangement on Tourism Professionals (ASEAN MRA-TP) that requires industrial support in its implementation. Marriot was said to be able to support the adjustment of curriculum and subjects in addition to involving students for practical work.

Tourism and Creative Economy Minister Sandiaga Uno noted that the memorandum of understanding with PT Indo Pacific Sheraton was a form of commitment to public-private cooperation, as instructed by President Joko Widodo to develop an inclusive and sustainable domestic tourism sector.

“Marriott International is an important partner as one of the world’s largest hospitality companies and a major player in accommodation providers in Indonesia, which reached prioritized regions across the country. I look forward to this (prospective) cooperation and see the positive results in the near future,” Uno remarked.

President Director of PT Indo Pacific Sheraton Ramesh Jackson stated that his side was committed to supporting Indonesian tourism.

“Collectively, we aim to enhance the experience for foreign tourists to get closer to the beauty of Indonesia, its natural wonders, rich history, and people,” Jackson remarked.

HEALTH NOTES: Hidden risk to the heart from kidney disease

Bars you reach by boat – and boats that are bars, from…