More than a decade ago, the army had a plan to rebuild. It went nowhere 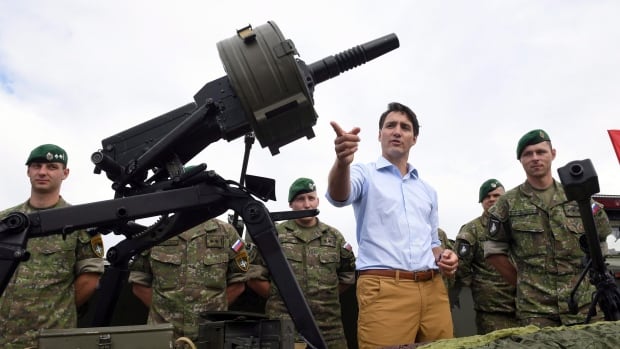 Ottawa is a city of plans. Many plans. Sometimes you find there are plans to have a plan. But as the old Scottish poem says, “The best laid schemes o’ mice an’ men often go awry.”

More than a decade ago, as Canada’s war in Afghanistan was grinding to its conclusion, a plan was drawn up to rebuild, refresh and re-equip the army for the future.

It withered and died over several years — a victim of changing defence fashions, budgets, inter-service and inter-departmental bureaucratic warfare and political indifference.

Parts of the plan were resurrected, but in true bureaucratic fashion, those elements have languished somewhere in the dark recesses of the Department of National Defence and Public Services and Procurement Canada.

Several of the key weapons systems in the 2010 plan — ground-based air defence, modern anti-tank systems and long-range artillery — are among the items the Liberal government is now urgently trying to buy, just as other allied nations also scramble to arm themselves against a resurgent Russia.

In November, a senior defence planner told a conference that it could take up to 18 months to land some of the less complex items on Ottawa’s wish list. In the meantime, Canadian troops in Latvia staring across the border at a wounded, unpredictable Russian Army will have to make do — or rely on allies.

Gen. Wayne Eyre, chief of the defence staff, said in an interview with CBC News broadcast this week that the new equipment “cannot arrive fast enough.”

The military is looking for ground-based air defence systems to guard soldiers against attack helicopters, low-flying jets and missiles. It’s seeking anti-tank weapons like the U.S.-made Javelin, which the Ukrainians have used to deadly effect against the Russians. It’s trying to source better electronic warfare systems and weapons to counter bomb-dropping drones.

The urgency of Eyre’s remarks points to the obvious question: If there was a plan to buy some of this equipment, what happened to it?

Former Conservative defence minister Peter MacKay signed off on the proposal to reconstitute the army post-Afghanistan and set in motion a series of plans. He launched procurement projects for medium-sized fighting vehicles — the kind the U.S. is now supplying to Ukraine to beat back the Russian invasion. Also on MacKay’s shopping list were ground-based air defence systems, anti-tank weapons and long-range rocket artillery systems such the U.S. HIMAR — another donated weapon Ukrainian troops have used to help stem the onslaught.

“It was quite a robust, detailed plan with short, medium and long term goals,” MacKay told CBC News in an interview. “The close combat vehicle (CCV) was a big part of that … There was obviously a need to replace and complement some of the long-range artillery that we use in Afghanistan.”

Former army commander and lieutenant-general Andrew Leslie, who also served as a Liberal MP between 2015 and 2019, was one of the authors of the 2010 rebuilding proposal. He said it was meant to cover gaps the military had seen develop during the counter-insurgency war in Afghanistan.

“This was not something that was dreamt up in isolation. They were planned, programmed and sequenced [for delivery] between the year 2010 up to around 2020,” Leslie told CBC News. “I kind of wish that people had followed through.”

‘The plan seemed to get picked apart’

Within a year of agreeing on the plan, Leslie moved on from the army commander’s job and then out of the military. MacKay was shuffled to the justice minister’s portfolio. Another champion of the proposal, former chief of the defence staff general Walt Natynczyk, retired around the same time.

After 2013, MacKay said, “the plan seemed to get picked apart, and almost put to one side. So it never came to fruition.”

He said that while the current Liberal government, in its 2017 defence policy, resurrected some elements of the proposal, the proposal is mostly “sitting there on a shelf somewhere, unfortunately.”

The last major element of the proposal — the purchase of 108 close-combat vehicles — was cancelled by the Conservative government of Prime Minister Stephen Harper in late 2013. The chief of the defence staff at the time, the now-retired general Tom Lawson, said that the “Canadian Armed Forces do not procure capabilities unless they’re absolutely necessary to the attainment of our mandate.”

The attitude of ‘we’re not going to buy it unless it’s absolutely necessary’ has been shared by both Liberal and Conservative governments since the end of the Cold War, said MacKay.

While he said the government’s pursuit of a balanced budget at the time was a worthy one, rebuilding military capacity is seldom a government priority in peacetime — even when it makes sense.

It’s one of the reasons the Canadian Army went into a desert war in Afghanistan wearing green camouflage fatigues and in unarmoured vehicles.

A cycle of failure

Leslie has become decidedly jaded about politicians’ promises to restore the armed forces to fighting strength.

“Liberals and Conservatives both have found a neat trick of telling Canadians that they are increasing defence spending, that the capabilities are on the horizon, but then somehow never getting around to fine-tuning the various procurement systems so that the money gets out the door,” he said.

When those procurement systems fail to deliver the goods, Leslie said, the politicians say, “‘Hey, we told them they could have their money. They just couldn’t spend it in time.'”

“And of course,” he added, “at the end of the year, the cycle [of handing back unspent money to the federal treasury] starts.

“You know, after 20 to 25 years of this, you begin to suspect that it’s deliberate.”

Politics aside, MacKay said the system itself is to blame.

“There is a competing and almost intractable attitude between departments like public works that want to somehow design a perfect, impenetrable contract that will stand up against any challenge,” MacKay said.

“The Department of Industry Canada wants every nut and bolt and washer made in Canada. And of course, not surprisingly, the Canadian Armed Forces want the very best possible equipment that sometimes isn’t there on the shelf, and certainly takes time to build and procure.”

And not everyone agrees on what the military really needs — even within the defence establishment itself.

Eyre’s recent warnings about the precarious geopolitical climate are “probably a little overstated,” said Lawson, who suggested his successor was simply doing his job and advocating for the military.

“There is something else at play here that is really grave and important to Gen. Eyre,” Lawson told CBC’s Power & Politics this week.

“The main responsibility of every chief of defence is … to make sure that the Canadian military has enough people, the appropriate numbers of people, that they are equipped to an appropriate level and that they are trained and providing the readiness that the government may need.”

Lawson’s remarks drew a sharp response from Leslie, who said Russia’s invasion of Ukraine is unprecedented and has upended the global order.

“The world is now much more dangerous than it’s been at any other time during my lifetime,” he said. “Far more dangerous than the Cold War. So I believe Gen. Eyre’s comments are balanced and reasonable, and I think general Lawson is completely and utterly wrong.”

What defence expert Dave Perry is struggling to understand is why the equipment the Liberals are scrambling to buy now — the air defence and anti-tank weapons they identified as important in their defence policy five years ago — haven’t been purchased already.

“There was a series of projects that were funded and policy approved in [the defence policy document] which was published in the summer of 2017,” Perry said.

“So I do find it really curious that versions of those are now being pursued on an urgent operational basis for Latvia, when there’s been approved projects, with money attached to them, on the books for five and a half years.”

‘A lack of urgency’

Senior defence and procurement officials, testifying before Parliament last year, said they were proud of their record of delivering equipment under the current defence policy.

Perry begs to differ and points to the rising pile of unspent capital in the defence budget.

“There’s urgency now,” Perry said. “But I think, in part, Canada ended up in the situation as a result of a lack of urgency in the preceding five-plus years.”

“I was the army commander for four years at the height of the Afghan war. So I had a front row seat to the various influencers, and their shenanigans concerning defence procurement,” he said.

“Tragically, it wasn’t until Canadians started dying in Afghanistan that a great deal of focus and energy was placed on defence procurement. And the bureaucracy was told in no uncertain terms — woe betide any of you who slowed down programs that caused more soldiers to die because they didn’t have the equipment they needed.”

Chinese, American airlines ramp up plans for US service