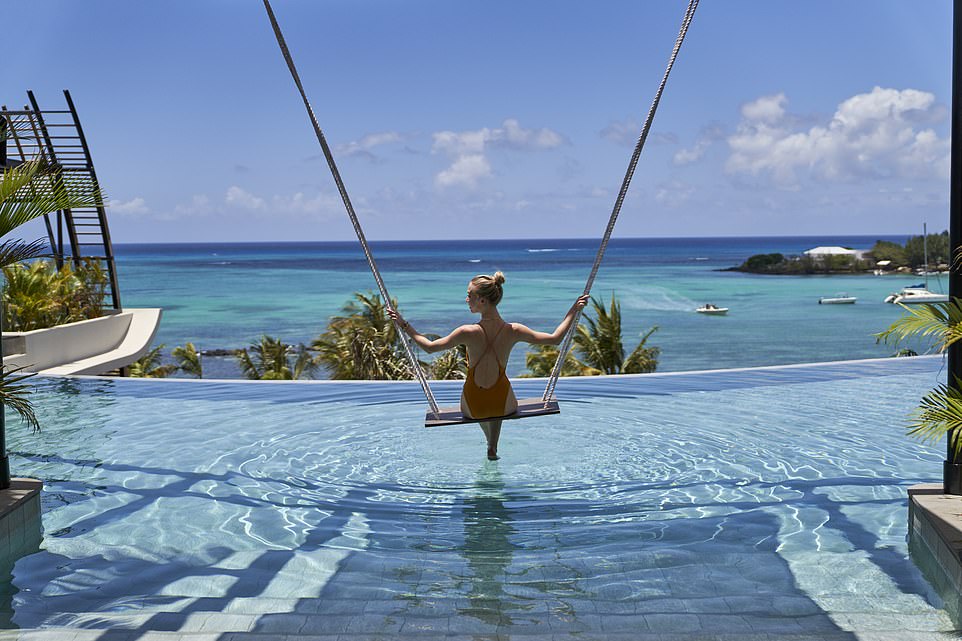 The elderly couple in front of us are in the throes of passion. I say ‘passion’ but, to be precise, the old geezer is attempting an ungainly clamber on top of his paramour, who is staging a slow and ineffective getaway.

Well, it’s not easy getting frisky when you’re approaching 150 years old and encumbered by bodies roughly the size of a family hatchback.

It is a problem that Tizean and Rosette (or could it be Toto and Tifam?) must somehow have resolved, with the wisdom accrued from being among the oldest residents of Mauritius, for they have apparently produced several dozen offspring over the decades.

We are in the Chamarel Seven Coloured Earth geopark, in the southern hills of Mauritius, where my wife and I should be enraptured by the seven shades of spectacular volcanic sands that rise and fall in dunes of mesmerising iridescence. 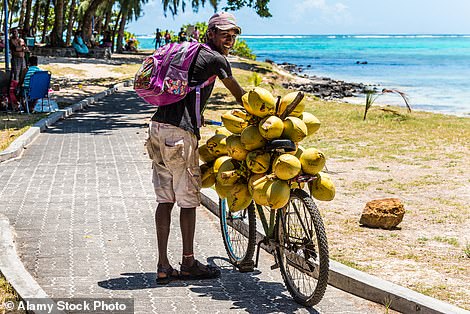 A coconut seller by Blue Bay, one of the ‘glorious’ beaches of the south

Instead, we’re watching a pair of the park’s resident Aldabra giant tortoises — the second largest species of tortoise on the planet — getting jiggy. Clack, clack, clack.

It’s the first excursion on a ten-day trip that will take my own beloved and I from the glorious, surf-kissed beaches of the unspoilt southern tip to the new jewel in the crown of Mauritius’s high-end hotel scene in the north. It’s an omnivore’s tour, taking in little tasters of all this diverse country has to offer in its compact but astonishingly varied 790 square miles.

Our driver, ferrying us along the trail, is Yves, whose encyclopaedic knowledge of Mauritian history is exceeded only by his fondness for macabre tales behind every island blackspot. (‘Here is where the river flooded and a priest walking past was washed clean away’; ‘Here is where a high tide rose into the graveyard one day and the streets were filled with floating coffins’). 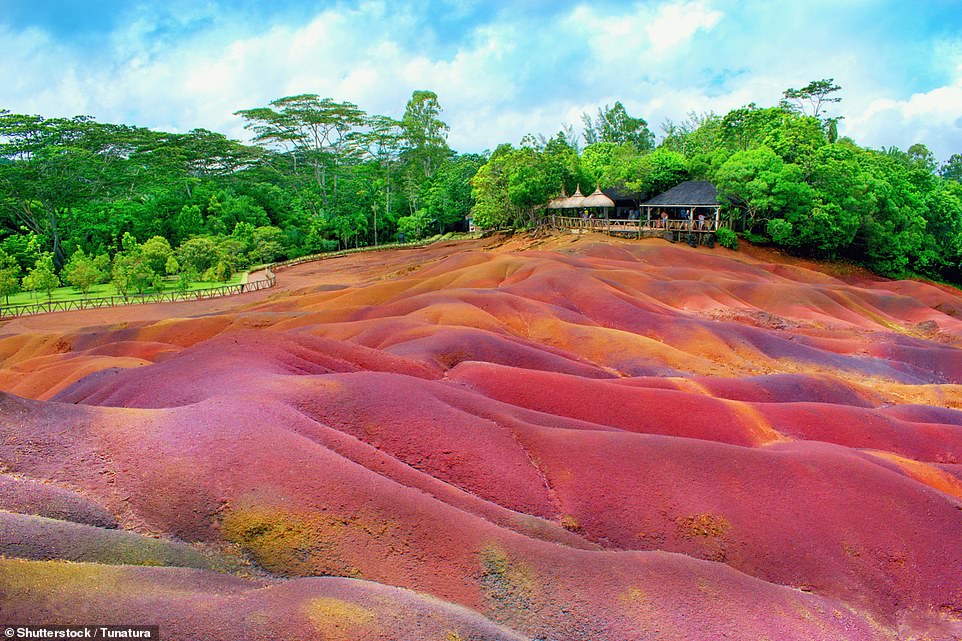 The Chamarel Seven Coloured Earth geopark (above), where spectacular volcanic sands ‘rise and fall in dunes of mesmerising iridescence’ 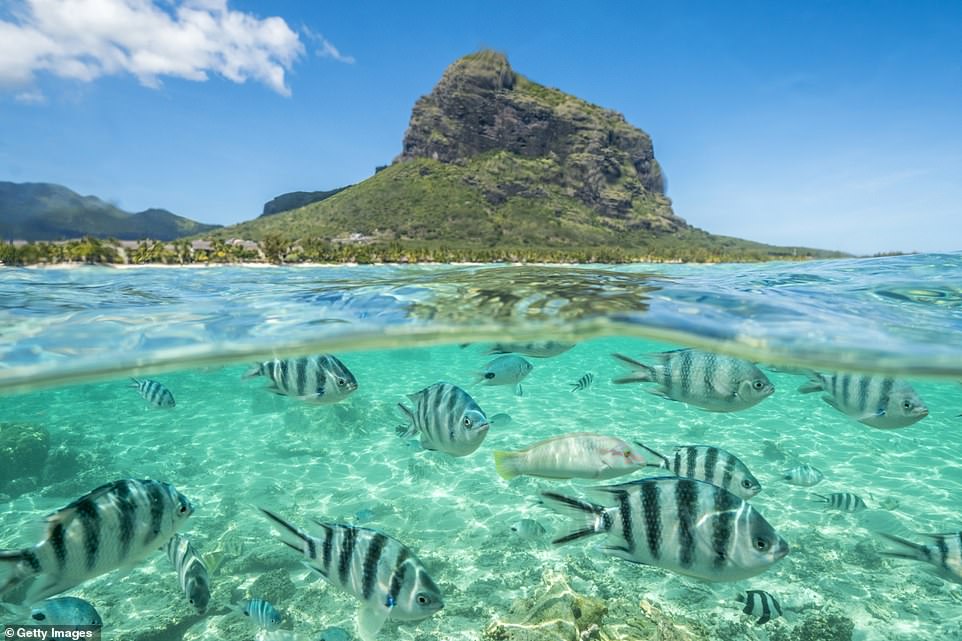 Harry is impressed by all that Mauritius has to offer in its ‘compact but astonishingly varied 790 square miles’. Above is the isle’s Le Morne Brabant peninsula

Mauritius is the only known habitat of the dodo (an extinct flightless bird the size of a swan). It is still considered to be the national bird of the country.

The island has no indigenous population. It was uninhabited until the Arabs landed there in the Middle Ages.

Rum is the national drink. Local specialities include vanilla, coffee, coconut and even chilli flavours.

It is only 40 miles long and 28 miles wide. Coral reefs surround almost the entire island.

More than 1.2 million people live on Mauritius, making it the most densely populated country on the African continent.

One of the rarest birds in the world, the pink pigeon, is found on the island.

There is no official language. Most people speak Creole, French and English.

We begin at the Lakaz Chamarel, an independent eco-hotel, owned by the former manager of a five-star beach resort. The result is a wonderfully informal but stylish retreat, with plenty of little luxuries offered alongside one’s halo of green virtue, not least of which is the fabulous food.

A true melting pot of cultures, with no indigenous people, Mauritian culture and cuisine hoovers up the best of the African, Indian, Chinese and European influences that have shaped its past and its palates.

We dine while watching flying foxes swooping through the dusk skies (in reality, they’re fruit bats, with which Mauritius is blessed or cursed, depending on whether you are a naturalist or a farmer).

Next day, we opt for a guided forest walk in the Black River Gorge with dreadlocked part-time musician Steeve Larridain, who explains how each tree has its own purpose: the wild apple for medicinal magic; the pink pepper tree for its tongue-tingling spice, and the ‘travellers’ tree’ whose vast palm fronds store water at the base for parched walkers.

We sweat our way up through the morning’s sub-tropical swelter to a viewpoint from which the island stretches out to the distant sea in valleys and peaks of such dazzling emerald it’s almost painful on the retinas.

We’d hoped to see a crane but they are largely to be found in the Casela Nature Parks. Time for a quick river plunge to cool off before our return to civilisation.

And what civilisation awaits, as we transfer to the Shanti Maurice beachside resort — spacious, authentic and full of character.

Being cheapskates who prefer to travel with our own G&T ingredients than lose a limb to minibar prices, we arrive with supermarket bags of tonic that promptly burst open at the feet of the manager’s welcoming line-up.

The embarrassment is compounded when we are taken to our upgraded room — a spectacular villa that has its own private pool facing the ocean, with a tray floating in it bearing a bottle of chilled Bollinger. It’s like the set of a lottery winner’s TV ad. 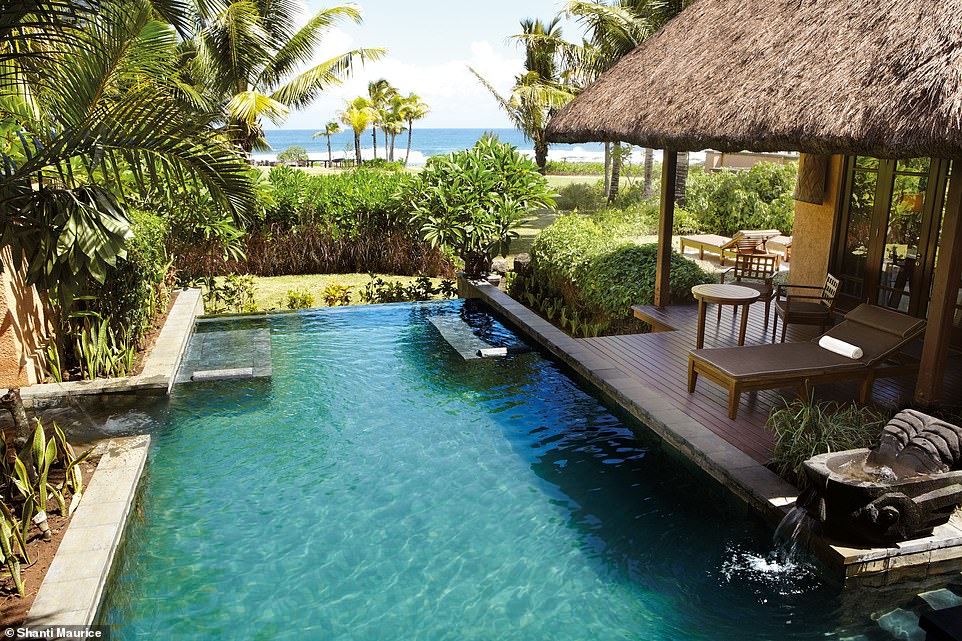 The Shanti Maurice beachside resort, pictured, is ‘spacious, authentic and full of character’

‘I bet we’re the only people who’ve stayed here that brought their own lemons,’ cringes my wife, as we’re shown around our quarters by the designated butler.

It’s not the Bolly that’s the star of the Shanti drinks menu, though. For that you need to head to its Rum Shed, which boasts more than 250 varieties of the spirit for which the island is rightly famed — the perfect complement to a platter of grilled giant prawns or the largest and most exquisite burger I’ve ever eaten.

Over one last post-prandial tot, we chat to the Shed’s resident chanteuse, Corina Matuka, who has just returned from visiting her brother in Haywards Heath, West Sussex. 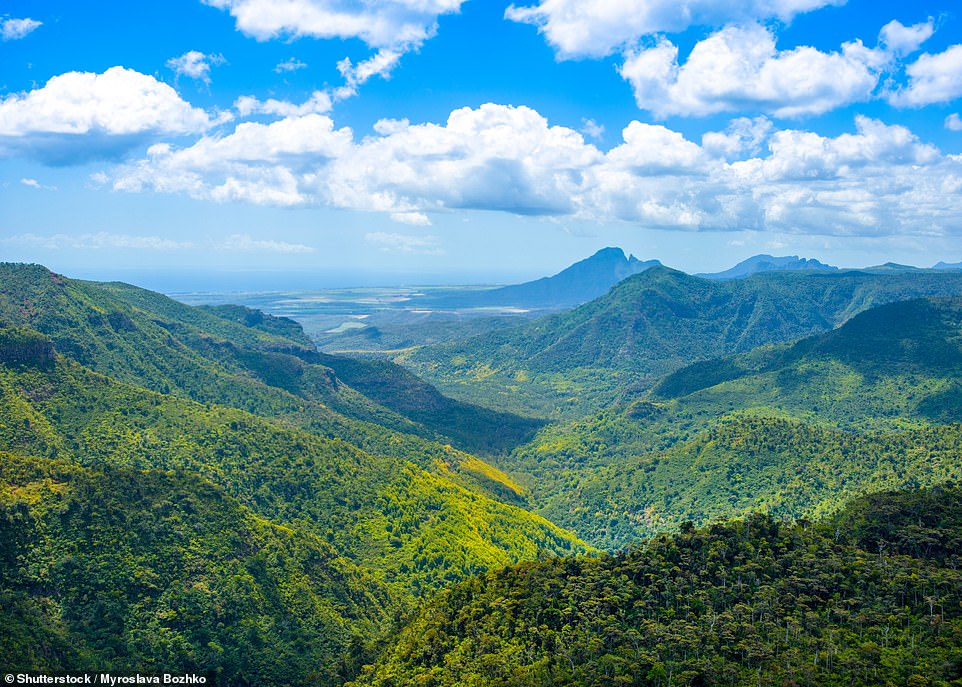 On a guided forest walk in the Black River Gorge (above), Harry learns that each tree has its own purpose – for instance, the pink pepper tree is known for its tongue-tingling spice 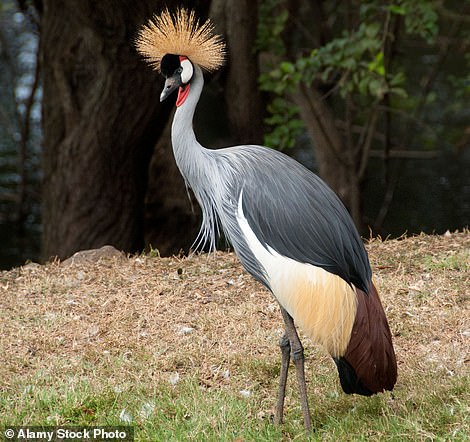 Cranes are largely to be found in the island’s Casela Nature Parks (above), Harry reveals

I ask her what she missed the most while being away. ‘The sea,’ she replies. ‘I missed it so much that one day I took the train to Brighton, but it was so cold. How can you swim in that? Now every day I give thanks I can go swimming here again.’

We, too, give thanks for every daily dip in the warm Mauritian seas, and the abundant beauty to be found beneath the surface for snorkellers. The more sheltered beaches and reefs of the north were the big draw of our final destination, the newest and swankiest of the Lux group’s many Mauritian resorts, the Lux Grand Baie.

This architecturally awesome new construction, with its swathes of traditional thatched roof contrasting with the ultra-modern interiors by British design queen Kelly Hoppen, will divide opinion.

Sceptics might quibble that it’s a hotel seemingly conceived around Instagrammable set-pieces — the rooftop pool’s ‘love swing’ has already achieved social media fame. Others will revel in its seven varieties of Kombucha tea at the breakfast buffet; the Ibiza-lite music piped from every posing point; and rooms with those Japanese high-tech loos that shoot water in unexpected places — as an eardrum-busting shriek from my wife demonstrates.

This is a design-heavy place where the colour palette — strictly black, white and scarlet — even extends to the spines of the novels placed on its bedroom bookshelves.

‘We wanted to create the vibe of an urban hotel, but on the beach,’ explains manager Ashish. This may strike some as being about as logical as putting a beach hotel in the middle of Soho, but each to their own. 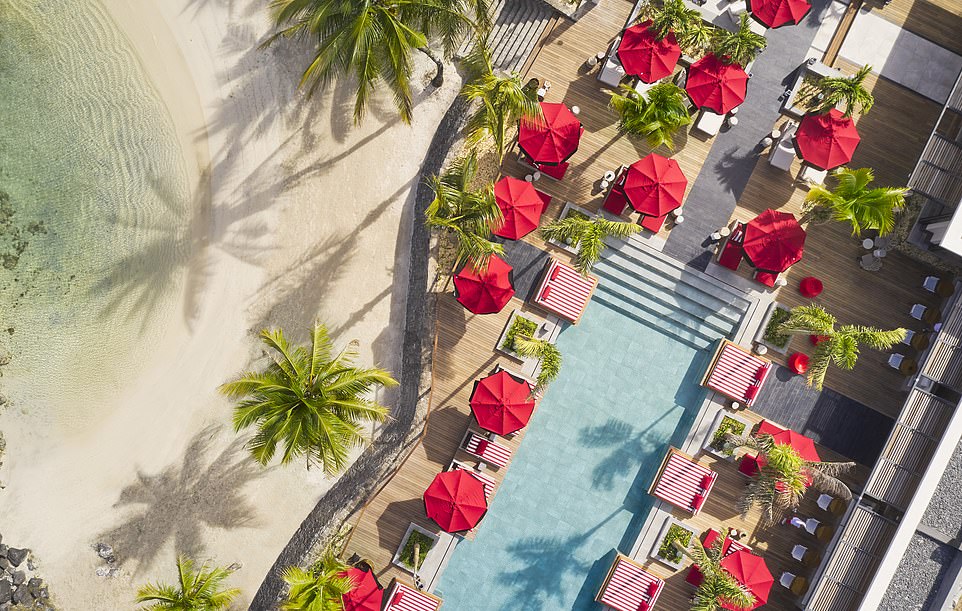 Us? At first, we fear the Grand Baie might not be our kind of place: more Love Island than Love Actually. But after three days of shameless indulgence, including a truly sensational massage in its vast modernist spa and a feast of Kobe beef flamed over burning rice straw in the showcase Japanese restaurant, it was hard to stay sniffy.

And for this watersports addict, the range of kit and the super-friendly beach staff were a joy. Nowhere else have I encountered a ‘pedalboard’ — half paddleboard, half stand-up bicycle, and wholly hilarious fun.

Asked for feedback as we reluctantly head home, I enquire why, despite all the modish opulence, there appear to be no wastepaper baskets in the rooms (a personal bugbear). ‘Kelly is very specific about the type of bin she’s happy with,’ explains Ashish. Apparently none had been found in time for launch day. I wonder if she’ll only permit colour co-ordinated rubbish in them when they get there.

Scott Dunn offers an eight-night Mauritius itinerary from £6,640 based on two people sharing on a half-board basis. It includes four nights at Lakaz Chamarel, four nights at Lux Grand Baie, return flights from the UK and private transfers. For more information, visit scottdunn.com or call 020 8682 5080.

Queens, New York – a short subway ride from Manhattan brings the world in a borough