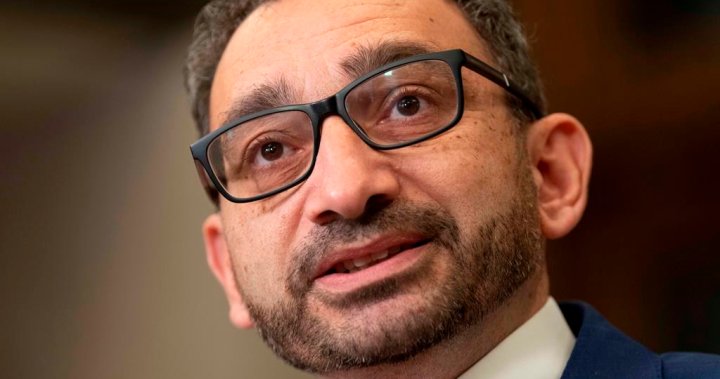 The Liberal MP who chairs the Canada-Palestine Parliamentary Friendship group is among multiple Canadian politicians condemning the presence of a man accused of being a “Holocaust denier” at a Parliament Hill reception held earlier this week to mark the International Day of Solidarity with the Palestinian People.

Salma Zahid, the Liberal MP who chairs the all-party friendship group, condemned the views of Nazih Khatatba, the publisher and editor of a Toronto-based Arabic-language newspaper, who Conservative MP Melissa Lantsman told the House of Commons Thursday was “a dangerous antisemite, Holocaust denier, and terrorist sympathizer.”

Though MPs from all parties, including Lantsman’s, attended the event, Lantsman demanded that the Liberal government apologize for Khatatba’s presence at the reception.

Transport Minister Omar Alghabra, who was one of several MPs who attended the Nov. 29 reception in Parliament Hill’s Valour Building, said he had no interaction at the event with Khatatba and, on Twitter, said Khatatba should not have been invited.

Zahid, for her, part, said Khatatba was not invited by name but that Khatatba was one of about 150 individuals who responded to what amounted to an open invitation for anyone to attend.  And, upon learning Thursday about Khatatba’s attendance, she issued a statement saying:  “I have long been a voice against antisemitism, and all forces of discrimination based on faith. In 2016, I spoke in the House of Commons to condemn several recent antisemitic incidents, and antisemitism in general.

“I continue to oppose and condemn any and all incidents and comments of antisemitism, Islamophobia and other forms of discrimination based on faith.”

Earlier this year, the Trudeau government came under withering criticism, including some that originated within the government caucus, after the Department of Canadian Heritage gave a grant to an organization headed by an individual, Laith Marouf, who had posted antisemitic statements on his Twitter page.

New Democrat and Bloc Quebecois MPs also attended Nov. 29 event along with at least one Green Party MP and one Conservative MP.

“New Democrats unequivocally denounce antisemitism and holocaust denial,” said Melanie Richer, the NDP’s director of communications. “No NDP MPs invited this individual nor were they aware he would be present. We continue to be allies in the fight against antisemitism.”

That Conservative MP, Larry Brock (Brantford–Brant) said he attended the reception at the request of a constituent.

“I was unaware of the attendance of [Khatatba],” Brock said in an e-mail. ” I did not interact with this individual and had I been aware of his attendance, I would not have attended. I fully condemn anti-Semitism and reject these disgusting views. They have no place in Canadian society. I deeply regret and apologise for the harm and hurt this has caused.”

The fact that none of event’s organizers nor any of the MPs attending knew about Khatatba’s background or that he would attend renews a debate that has cropped up several times over the past decades: How much responsibility should MPs bear for insisting on checking the backgrounds of attendees at events where any member of the public is invited to attend?

“It is incomprehensible that failures of vetting like these continue to occur, completely ignoring the lessons that should have been learned in the wake of the Laith Marouf scandal,” Shimon Koffler Fogel, CEO of the Centre for Israel and Jewish Affairs, said in an emailed statement.

“This sends a terrible message to the Canadian Jewish community, which can only be left to assume that condemning antisemitism is not a priority, and that we are not a priority. We once again urge enhanced oversight be applied in vetting across the board, whether it’s for government funding or events on Parliament Hill.”

Khatatba, reached by phone on Thursday, said he ended up at the reception after learning about it from a Palestinian-Canadian organization though he did not name the group. He said he was not invited to attend by any MP.

He also rejected the charge that he holds antisemitic views. “I am publishing anti-Israel, anti-occupation articles,” he said, adding that he does not deny the Holocaust happened.

Zahid said her office provided a general invitation to the event to the Canadian Palestinian Organizations Coalition, an umbrella group which has as its members other organizations that advocate for Palestinians. That coalition in turn distributed the open-ended invite, asking those interested in attending to simply submit their name to Zahid’s office.

Zahid said her office does not have the resources to check the background of all those who indicated their interest in attending.

“You can’t know everybody that’s going to be at every event you go to,” said Anthony Housefather, a Liberal and Jewish MP who represents the Quebec riding of Mount Royal. Housefather did not attend the event and thinks the quick condemnation by MPs who did attend is appropriate.

“I think the main thing is now that people are aware that they clearly condemn what he stands for and his views.”

‘It’s bloody awful and amazing all in one’: What I wish I’d…