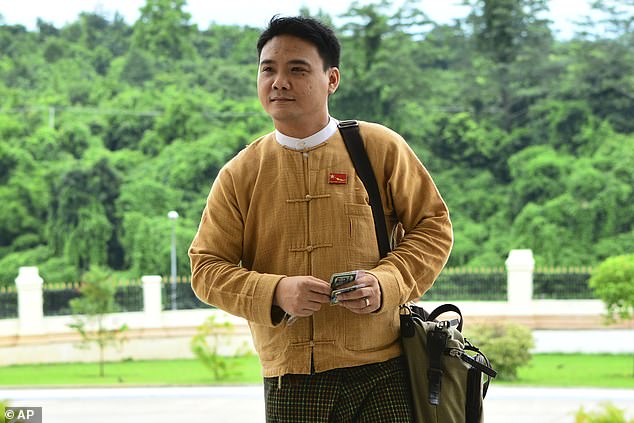 Myanmar’s junta has executed four democracy activists including a former lawmaker from jailed leader Aung San Suu Kyi’s party in the the country’s first use of capital punishment in nearly 50 years.

The four men, including former politician and hip-hop artist Phyo Zeya Thaw, 41, and prominent activist Kyaw Min Yu, 53, were sentenced to death for committing ‘terror acts’ in closed-door trials in January and April.

They were accused of helping ‘insurgents’ fight the army after generals seized power in a coup last year and unleashed a bloody crackdown on its opponents.

Phyo Zeya Thaw, 41, a former politician and dissident hip-hop artist, has been hanged in Myanmar after being convicted of aiding insurgents by the ruling military junta 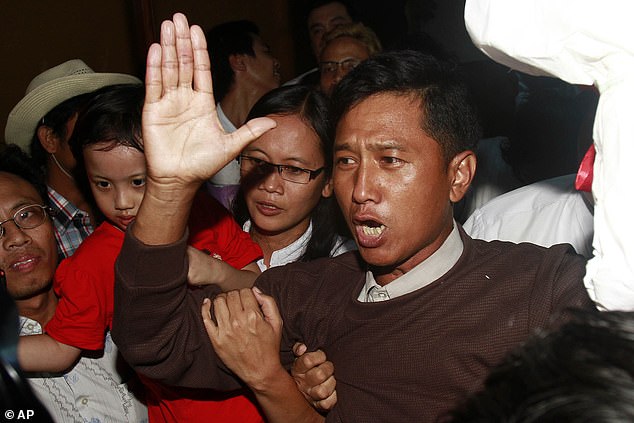 Kyaw Min Yu and Phyo Zeya Thaw, an ally of Aung San Suu Kyi – the country’s elected leader who is now facing the rest of her life behind bars at a secret location – lost their appeals against the sentences in June.

The two other men, Hla Myo Aung and Aung Thura Zaw, were sentenced to death for killing a woman they alleged was an informer for the junta in Yangon.

The executions sparked widespread condemnation, heightened fears that more death sentences will be carried out and prompted calls for the international community to take sterner measures against the already-isolated junta.

The United States condemned the ‘execution of pro-democracy leaders and elected officials for exercising their fundamental freedoms’ while France’s foreign ministry called the hangings ‘a major regression’ and an ‘atrocity’.

Japan’s government – a major provider of economic assistance to Myanmar – said it ‘seriously deplores’ the executions.

The United Nations’ Special Rapporteur on Myanmar Tom Andrews said he was ‘outraged and devastated by the news’, adding that: ‘These depraved acts must be a turning point.

‘What more must the junta do before the international community is willing to take strong action,’ he asked.

Amnesty International said the executions were an ‘atrocious escalation in state repression’ and warned around 100 others were currently on death row after being convicted in junta courts.

Khin Zaw Win, director of Myanmar think-tank Tampadipa Institute, said the killings show ‘there is no turning back’ for the ruling junta.

‘There were no executions for 30 years and we thought death sentence may be permanently abolished. This turns back the clock. Country going back into dark ages,’ he said.

The junta has sentenced dozens of anti-coup activists to death as part of its crackdown on dissent after seizing power last year, but Myanmar had not carried out an execution for decades. 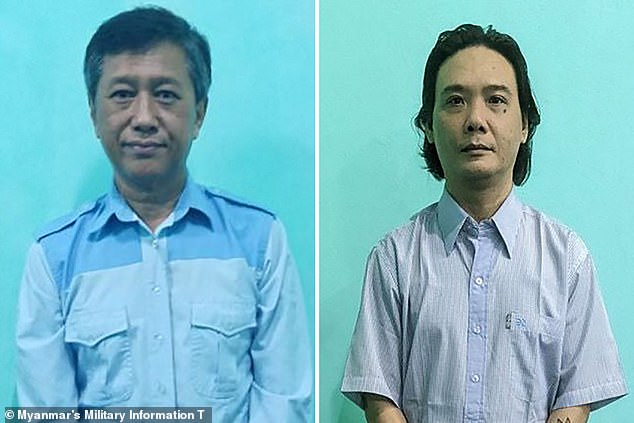 Kyaw Min Yu is pictured left in detention in Myanmar before he was executed, while Phyo Zeya Thaw is seen right in detention 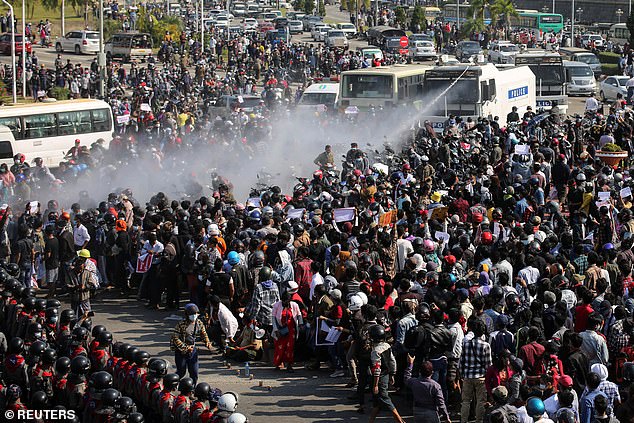 Myanmar’s generals seized power in a coup last year and have since been brutally repressing pro-democracy protests (pictured, a crack-down in February 2021)

Phyo Zeya Thaw, a former lawmaker from Suu Kyi’s National League for Democracy (NLD) who was arrested in November, was sentenced to death in January for offences under anti-terrorism laws.

Family members of the two men gathered outside Yangon’s Insein prison after news of the executions was published in the hopes of retrieving their bodies, local media reported.

The United Nations’ Special Rapporteur on Myanmar Tom Andrews said he was ‘outraged and devastated by the news.’

‘These depraved acts must be a turning point… what more must the junta do before the international community is willing to take strong action?’

Myanmar’s National Unity Government (NUG), a shadow administration outlawed by the ruling junta, condemned the executions and called for international action against the ruling military.

‘Extremely saddened… condemn the junta’s cruelty,’ Kyaw Zaw, the spokesman of the NUG president’s office, said. ‘The global community must punish their cruelty.’

Human Rights Watch said the executions were an ‘act of utter cruelty’.

Amnesty International said they were an ‘atrocious escalation in state repression’ and warned around 100 others were currently on death row after being convicted in junta courts.

The junta was heavily criticised by international powers last month when it announced its intention to carry out the executions.

United Nations Secretary-General Antonio Guterres condemned the junta’s decision, calling it ‘a blatant violation to the right to life, liberty and security of person’.

The junta has slammed criticism from the UN and western countries as ‘irresponsible and reckless.’

UN rights experts said that if the executions went ahead – for the first time in Myanmar since 1988 – it could mark the start of a spate of hangings.

The experts said that under the junta’s martial law provisions, the death penalty could be given for 23 ‘vague and broadly defined offences’ – which in practice could include any criticism of the military.

Myanmar expert Richard Horsey of the International Crisis Group (ICG) said on Twitter that the executions were ‘an outrageous act. And one that will create political shockwaves, now and for a long time to come’. 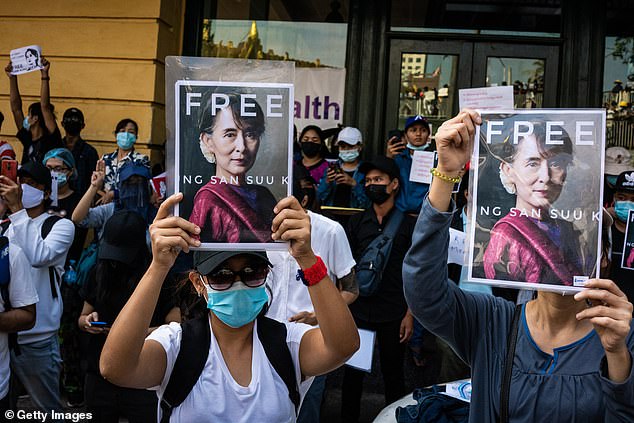 Aung San Suu Kyi, Myanmar’s elected leader, was arrested as the coup began last year and is now thought to be languishing in jail somewhere in the country

Phyo Zeya Thaw had been accused of orchestrating several attacks on regime forces, including a gun attack on a commuter train in Yangon in August that killed five policemen.

A hip-hop pioneer whose subversive rhymes irked the previous junta, he was jailed in 2008 for membership in an illegal organisation and possession of foreign currency.

He was elected to parliament representing Aung San Suu Kyi’s NLD in the 2015 elections, which ushered in a transition to civilian rule.

The country’s military alleged voter fraud during elections in 2020 – which the NLD won by a landslide – as justification for its coup on February 1 last year.

Suu Kyi has been detained since then and faces a slew of charges in a junta court that could see her face a prison sentence of more than 150 years.

Last month she was reportedly moved to solitary confinement at an undisclosed location. She has not been since in public since the coup.

Kyaw Min Yu, who rose to prominence during Myanmar’s 1988 student uprising against the country’s previous military regime, was arrested in an overnight raid in October.

Cambodian Prime Minister Hun Sen, chair of the Association of Southeast Asian Nations (ASEAN), appealed in a letter in June to junta leader Min Aung Hlaing not to carry out the executions, relaying deep concern among Myanmar’s neighbours.

‘Not even the previous military regime, which ruled between 1988 and 2011, dared to carry out the death penalty against political prisoners,’ said Malaysian member of parliament Charles Santiago, chair of the ASEAN Parliamentarians for Human Rights.

‘This means yet another increase in the junta’s brutality, which comes from a sense of impunity largely fostered by the failure of the global community to do anything effective to prevent it from committing further atrocities.’

Japanese Foreign Minister Yoshimasa Hayashi said the executions, which go against Japan’s repeated urging for a peaceful resolution as well as its demands to free detainees, would further isolate Myanmar.

Myanmar has been in chaos since last year’s coup, with conflict spreading nationwide after the army crushed mostly peaceful protests in cities.

The AAPP says more than 2,100 people have been killed by security forces since the coup. The junta says that figure is exaggerated.

The true picture of violence has been hard to assess as clashes have spread to more remote areas where ethnic minority insurgent groups are also fighting the military.

The executions have shattered hopes of any peace agreement, said the Arakan Army (AA), a major ethnic militia in Myanmarâs restive Rakhine State.

‘This act wiped out ASEAN members’ efforts toward peace and reconciliation,’ the AA said in a statement, adding that the executions would only attract ‘braver heroes in the future, and contribute to the spring revolutionâ.

Last Friday, the World Court rejected Myanmar’s objections to a genocide case over its treatment of the Muslim Rohingya minority, paving the way for a full hearing.

The latest executions close off any chance of ending unrest in Myanmar, said analyst Richard Horsey, of the International CRISIS group.

‘This is the regime demonstrating that it will do what it wants and listen to no one,’ Horsey told Reuters. ‘It sees this as a demonstration of strength, but it may be a serious miscalculation.’ (Reporting by Reuters Staff; Writing by Ed Davies and Michael Perry; Editing by Lincoln Feast and Clarence Fernandez)

How and why Temasek became a major agrifood investor