N.B. woman says she was ‘minutes from death’ after 14-hour ER wait 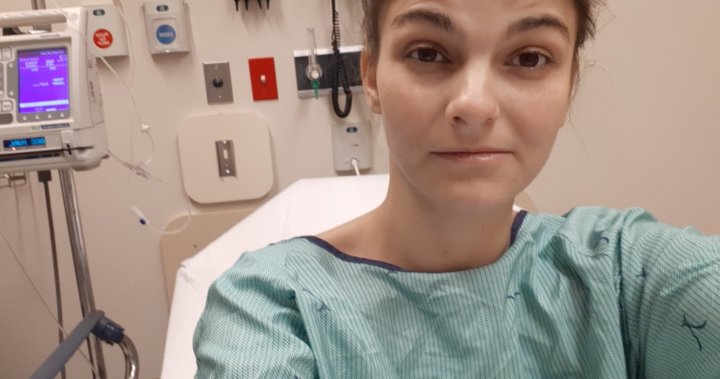 A woman who says she spent more than 14 hours in a Moncton, N.B., emergency room is calling for change to the province’s health-care system, alleging she almost died waiting.

That morning, an ambulance took Gallant – who was suffering from severe abdominal pain – to the Dr. Georges-L.-Dumont University Hospital Centre. She was triaged and had her vitals taken before settling in for what turned out to be a long wait in the emergency room.

Patient dies after waiting at N.B. ER while hospital in ‘critical overcapacity’

“I sat there quietly for about 14 hours before I couldn’t breathe and started going into medical distress,” Gallant, 29, told Global News.

“My lungs didn’t want to expand anymore, and obviously, when that happens, you go into panic mode.”

She said she told the triage nurse she couldn’t breathe and needed to see a doctor, but was told she would have to keep waiting.

“(The nurse) didn’t even come over to see if I was OK, he didn’t check my vitals, he just told me I needed to calm down,” Gallant alleged.

That’s when an ER doctor noticed she was in distress and came to help, she said. There were no more ER beds available, so she was taken to another room, where she began “vomiting uncontrollably.”

Hospital staff tried to rush her for an MRI, but they couldn’t right away because she was unable to breathe while lying down. They gave her medication for pain and vomiting, and she was able to get an MRI 30 to 60 minutes later.

“My fiancé told me I was in the MRI room maybe five minutes,” Gallant said. “They rushed me back to (the emergency room) and told him that I needed emergency surgery right away, that I had an abnormal amount of blood in my abdomen.”

They ended up pumping out 2.5 litres of blood, said Gallant, and her right ovary and fallopian tubes had to be removed. She said she never found out where the blood came from.

The emergency operation left her unable to have children; Gallant said already has four kids and wasn’t planning on having more, but the situation was highly troubling.

While Gallant was getting a blood transfusion the following day, she heard something disturbing from the surgeon.

“The surgeon came and saw us the next day and told my fiancé and I that I (had been) minutes from death and I was lucky to be alive,” Gallant said.

She said the surgeon told her to put in a complaint about the situation, and she has since emailed the hospital.

In a statement, Vitalité Health Network said they could not comment on a specific incident.

The network’s senior vice-president of clinical programs and medical affairs said there was no shortage of staff or beds on the evening Gallant was treated.

“We are committed to providing safe, quality care and services to the public and that all of the Network’s emergency departments follow triage and management standards for each person who comes in,” said Dr. Natalie Banville in the statement.

Gallant wonders why, if there was no shortage of staff or beds, it took 14 hours to be seen and why she was taken to a room outside the emergency department.

The experience has left her “traumatized,” she said.

Gallant said after her surgery, she spent about four days in the intensive care unit before being sent to the recovery floor. She checked out of the Dr. Georges-L.-Dumont University Hospital Centre soon after.

She said she was still in pain and had a lot of unanswered questions, so she went to the Moncton Hospital for a second opinion.

Since she was an emergency post-op patient, the wait this time was a bit shorter. She said it took 30 minutes to be triaged and she waited about three hours before having more tests done.

An X-ray revealed she had a small tear in her lung, but it was unclear if it was there before the surgery or if she got it during the surgery.

Again, she was left without answers.

“I was scared, with an overwhelming feeling of, ‘Oh my goodness, am I going to die? If I go home and I need to call 911, am I going to get to a hospital and get the proper treatment I need?’

“There was just a lot of fear. And I still feel that way.”


After leaving the Moncton Hospital, Gallant said she was still feeling symptoms and spoke with a nurse using eVisitNB. The nurse suggested she either return to the Dr. Georges-L.-Dumont University Hospital Centre, or visit the Dr. Everett Chalmers Regional Hospital in Fredericton, because those were the only two hospitals that had the proper imaging.

Gallant opted for the hospital in Fredericton, so she made the trip on Saturday. There, hospital staff did more tests, but they also weren’t able to tell where the bleeding came from.

She was told to call 911 if she had any back pain or chest pain, and was discharged once again.

Now that she’s been checked over by three hospitals, Gallant said she feels a bit more reassured, but she’s still frustrated by the situation.

“I still never got the full answers or testing that I should’ve,” she said.

Recovery has been difficult, especially with four children to take care of, but she said it would be a lot worse had she not had a strong support system of family and friends.

Gallant said she feels a bit better physically, but is still in pain and struggles to sleep at night.

“I’m still having a hard time, I’m still crunched over when I’m walking, I still have pain in my belly and I keep getting a sharp pain in my left side that nobody seemed concerned about … they said it was normal.

“I understand that your body does weird things – I can only imagine, after you’re cut open in surgery – but I feel that my questions are still unanswered (about) my own health.”

Gallant was clear that she did not blame the hospital staff, noting that they are overworked, but said the province must do something to fix the health-care system.

She said the province needs to hire more health-care staff and better support the ones they currently have.

“I’m hoping the government takes us New Brunswickers seriously, because I believe we have the worst health crisis out of all of Canada, especially here in the Moncton region,” she said.

“It’s not fair at all to the citizens, to the staff, to anybody who’s involved in this crisis or who has to face it. So hopefully the government can act now.”

She said her experience was “eye-opening.”

Visits suspended at N.B. hospital unit due to antibiotic-resistant infection

Gallant, who used to live in Calgary, said she almost wants to move back to Alberta because of New Brunswick’s struggling health-care system.

She said she is organizing a rally outside Moncton City Hall at 2 p.m. Saturday to help raise awareness for the issue.

She will be joined by members of Moncton’s Muslim community, who held a rally outside the Moncton Hospital last Saturday to protest the death of a beloved community member who died in the ER last week while awaiting care.

“It was heartbreaking. It was devastating. It shouldn’t have happened,” Gallant said of the man’s death.

“It’s not the hospital’s fault, it’s the government that needs to step up and help us.”

The perfect breakfast to maximise your energy for an early workout

Zoe Lyons talks getting into exercise and dealing with alopecia