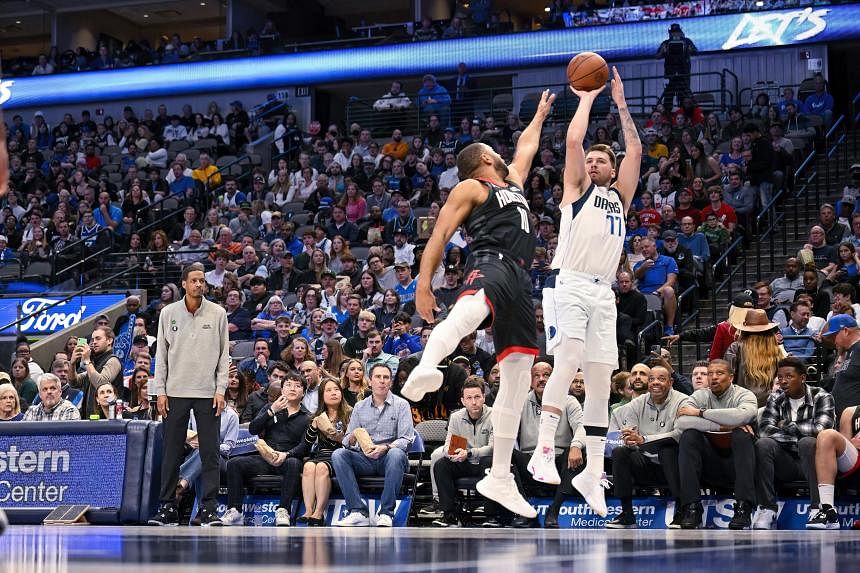 DALLAS – Dallas Mavericks coach Jason Kidd had wanted his team to step up and not depend on Luka Doncic all the time, and they duly did just that on Thursday night.

But even with three of their four other starters having double digits in points, it did not stop Doncic from recording his eighth triple-double of the National Basketball Association (NBA) season as the Mavs beat the Houston Rockets 129-114 at home for their fifth straight win.

The Slovenian guard – coming off a historic 60-21-10 line against the New York Knicks two nights earlier – finished with 35 points, 12 rebounds and 13 assists to lead a Dallas offence that shot 51.6 per cent overall while producing a 25-5 advantage in fast-break points.

Christian Wood was the next best scorer after netting 12 of his 21 points in the third period.

“I did ask a couple of players that we needed to step up and not wait for Luka, and they responded,” said Kidd, whose team improved to 20-16.

“We talked about it before the game and they understand the time or the stress we put on Luka, so we needed some guys to be able to get some easy baskets and take that stress off of him and they did that tonight.”

Doncic had 14 points, three rebounds and three assists in the opening period but it was not until the second quarter that Dallas began to pull away, starting with a corner three-pointer from Tim Hardaway Jr. (18 points) that provided the Mavs their first double-digit lead at 48-37 with 5min 56sec left in the first half.

Doncic put the finishing touches on that frame, drawing an offensive foul from Rockets centre Alperen Sengun with 1.1 seconds remaining to thwart a transition opportunity. He followed by beating the buzzer with a 35-foot three-pointer that lifted Dallas to a 65-51 lead at the break.

Dinwiddie had 15 points while Dwight Powell added 19 points on eight-for-eight shooting with six rebounds in only 21 minutes off the Dallas bench.

Not only were the Rockets inept in transition, they also shot 12 for 34 from behind the arc and missed 11 free throws.

Jalen Green led the Rockets with 23 points while Kevin Porter Jr. added 17 points and seven assists, as the Rockets lost their seventh in eight games to drop to 10-25.

“Yeah, it is amazing,” Houston coach Stephen Silas said of Doncic. “He’s shooting more free throws than he ever has in his career and it’s helping his scoring.

“It’s always been his passing that has been the thing that has really separated him from everybody else. But now he’s adding the scoring to the passing, which makes him just a nightmare to defend and prepare for.” REUTERS