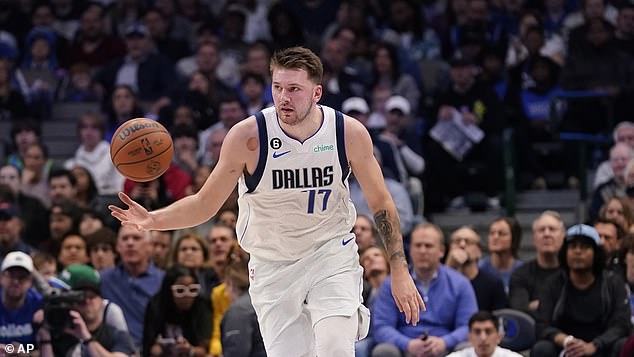 Luka Doncic showed no signs of slowing down as he recorded his eighth triple-double of the season and the Dallas Mavericks sprinted past the Houston Rockets 129-114 on Thursday for their fifth consecutive victory.

Doncic finished with 35 points, 12 rebounds and 13 assists to lead a Mavericks offense that shot 51.6 percent overall while producing a 25-5 advantage in fast-break points.

His display against the Rockets saw him become the first player in NBA history with 95 points, 20 rebounds and 20 assists over a 2-game span and follows a historic 60-21-10 line against the Knicks two nights earlier. 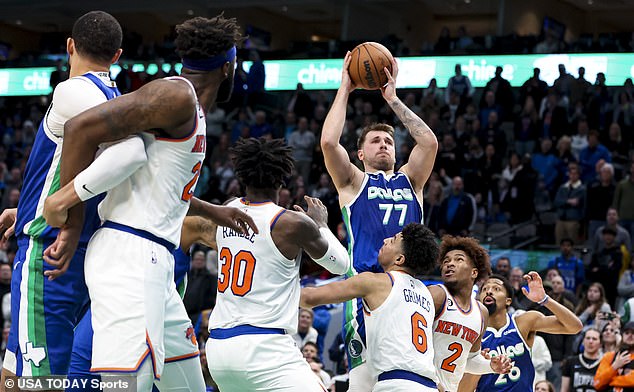 Doncic had 14 points, three rebounds and three assists in the opening period but it wasn’t until the second quarter that Dallas began to pull away, starting with a corner 3-pointer from Tim Hardaway Jr. (18 points) that provided the Mavericks their first double-digit lead at 48-37 with 5:56 left in the first half.

Doncic put the finishing touches on that frame, drawing an offensive foul from Rockets center Alperen Sengun with 1.1 seconds remaining to thwart a transition opportunity. Doncic followed by beating the buzzer with a 35-foot 3-pointer that lifted Dallas to a 65-51 lead at the break.

Wood (5-for-8), Doncic (4-for-9), Hardaway (3-for-8) and Spencer Dinwiddie (3-for-5) each made multiple 3-pointers for the Mavericks, who placed four starters in double figures. Dwight Powell added 19 points on 8-for-8 shooting with six rebounds in only 21 minutes off the Dallas bench. 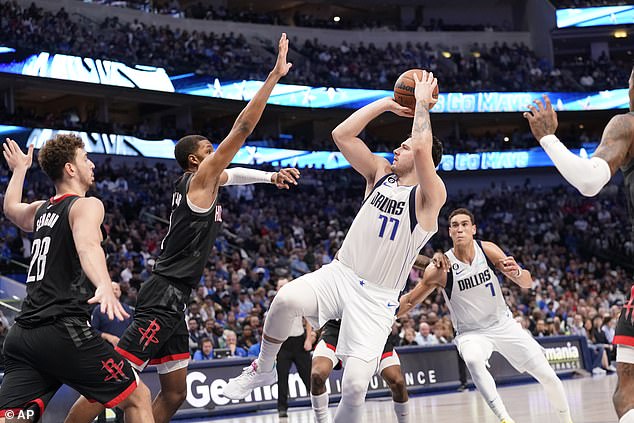 Not only were the Rockets inept in transition, they also shot 12 for 34 from behind the arc and missed 11 free throws. Rookie forward Jabari Smith Jr. matched Doncic with 14 first-quarter points but finished with only 16 while missing five of his final six shot attempts. Sengun posted 11 points and six rebounds but logged just 17 minutes as he was whistled for five fouls.

Jalen Green led the Rockets with 23 points while Kevin Porter Jr. added 17 points and seven assists. They both shot 4-for-7 on 3s, with their teammates finishing 4-for-20 from behind the arc.

The Rockets have dropped seven of eight games.

Three weeks after suffering their worst loss of the season in Los Angeles, the Celtics turned back the Clippers in Boston 116-110 on Thursday night, getting 29 points apiece from Jaylen Brown and Jayson Tatum.

‘We definitely wanted to play better than we played last time,’ Brown said. ‘Those guys beat us up pretty bad in L.A. So we wanted to change the narrative tonight on our home floor and come out and get a win.’ 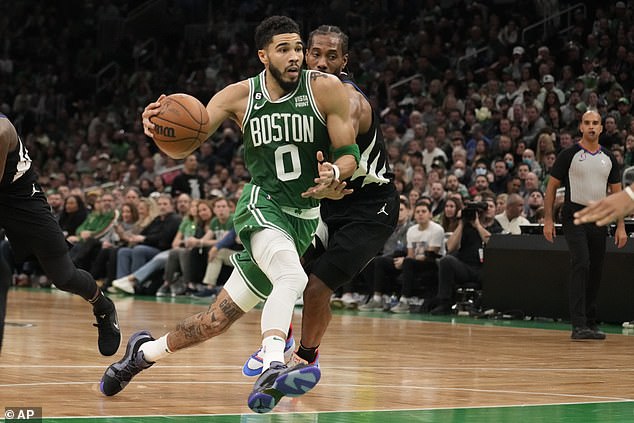 Derrick White scored 15 points and had two blocked shots, one of them on Paul George’s attempted layup with 33 seconds left and Boston leading by three.

Brown hit two free throws down the stretch and Tatum made one to ice it.

Kawhi Leonard scored 26 for the Clippers, George had 24 points and Ivica Zubac had 13 points and 11 rebounds. Los Angeles had won four of its last five games, sweeping a back-to-back against Detroit and Toronto earlier this week.

Ja Morant had a career-high 17 assists and scored 19 points and the Memphis Grizzlies won for the first time in three games, beating the struggling Toronto Raptors 119-106 on Thursday night.

Dillon Brooks scored 25 points, Desmond Bane had 16 before fouling out and Steven Adams had 14 points and 17 rebounds. Memphis recorded a season-high 37 assists and won its third straight north of the border after losing its previous seven trips to Canada.

‘It´s super impressive,’ Grizzlies coach Taylor Jenkins said about Morant´s 17 assists. ‘Tons of credit to Ja. It just sets a tone for us. His unselfishness, we talk about that all the time.’ 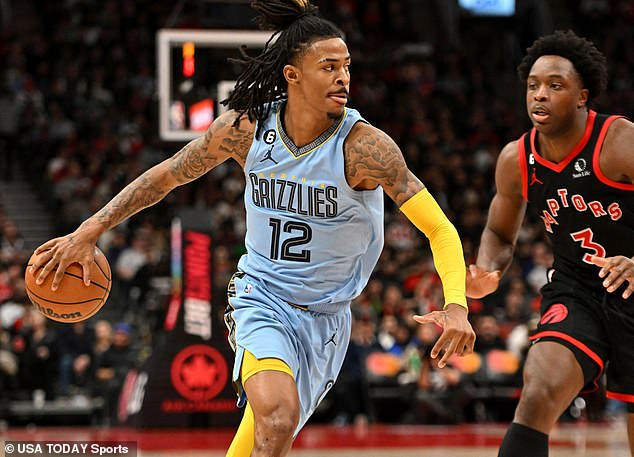 Pascal Siakam had 25 points and 10 rebounds for Toronto before fouling out, extending his career-best streak with 25 or more to six.

‘That´s pretty unacceptable with the effort we gave,’ Raptors coach Nick Nurse said. ‘We´ve got to get focused and connected and get serious about playing harder.’

Guard Romeo Langford added a career-high 23 points for the Spurs, who were without injured starter Devin Vassell. Tre Jones added 13 points and Jeremy Sochan had 12.

Knicks guard Immanuel Quickley had a career-high 36 points while starting in place of injured point guard Jalen Brunson, while Keldon Johnson registered 30 points for the Spurs. 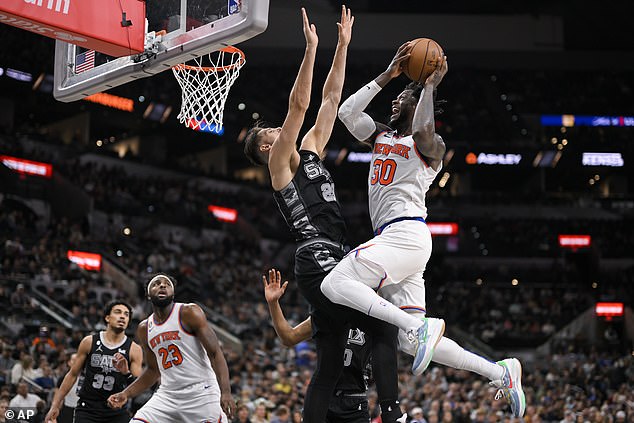 New York only led briefly after blowing a nine-point lead with 33 seconds left in regulation in an overtime loss to Luka Doncic and Dallas on Tuesday.

Randle´s 3-pointer midway through the first quarter gave the Knicks their largest lead of the game at 23-18. The Spurs would reclaim the lead 2 1/2 minutes later and never trail again.

After Doug McDermott made a 3-pointer, Johnson hit consecutive 3s to give the Spurs their largest lead at 90-73 with 3 1/2 minutes remaining.

The Indiana Pacers made a rapid start as they beat the Cleveland Cavaliers 135-126 on Thursday night.

Buddy Hield made a 3-pointer three seconds into the game and added 25, while Tyrese Haliburton scored 29 points. 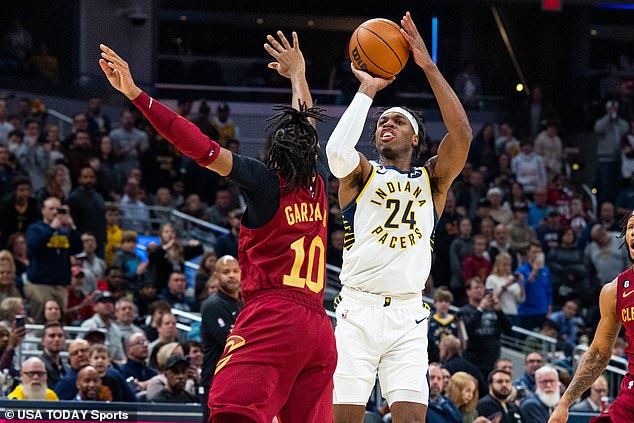 ‘You can’t ask for much better shooting than that,’ said Pacers forward Aaron Nesmith, who had 22 points. ‘They shoot the ball like that, it’s going to be tough to beat us any night.’

Indiana trailed by seven early in the fourth quarter before rallying. Hield fed Nesmith for a go-ahead dunk to give the Pacers a 120-119 lead with 4:26 remaining.

‘This is the most fun I´ve had playing basketball in a very long time,’ said Nesmith, a third-year pro acquired from Boston in the offseason.

Haliburton converted a three-point play on the next possession and the Pacers never surrendered the lead.

LaMelo Ball had 27 points, 10 rebounds and nine assists and the Charlotte Hornets beat the Oklahoma City Thunder 121-113 on Thursday night for just their third victory in the last 14 games.

P.J. Washington added 25 points on 10-of-13 shooting and Charlotte got a promising effort from rookie center Mark Williams with career highs of 17 points and 13 rebounds to go along with two blocks.

Mason Plumlee added 14 points and nine rebounds for the Hornets. They outscored the Thunder 18-10 in the final 4:14 to break open a tie game.