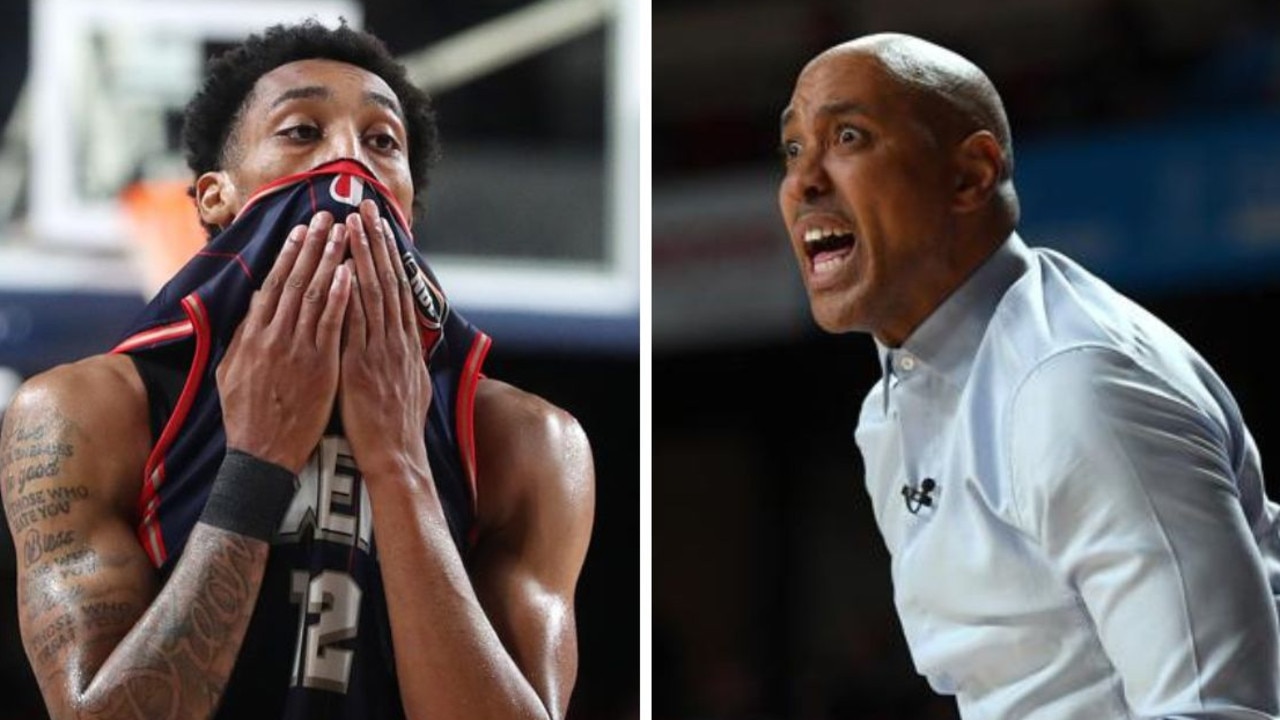 More details have emerged about star import Craig Randall II’s behaviour before he was sacked by the Adelaide 36ers midway through the NBL season.

Randall put the basketball world on notice with a blistering shooting display in Adelaide’s shock pre-season win over the Phoenix Suns.

He drained nine three-pointers as he topscored with 35 points, leading the 36ers to the first victory by an NBL team over an NBA outfit.

But Randall was axed by the 36ers after just six games following several blow ups with coach CJ Bruton and a refusal to fit in with the team’s game plan.

A new episode of the NBL’s documentary Unrivalled has lifted the lid on Randall’s tumultuous time in Adelaide and what led to his eventual sacking.

Bruton, who won six NBL championships as a player, revealed issues to do with Randall’s “selfishness” started in the pre-season and snowballed in Adelaide’s season-opening loss to Tasmania at home.

Behind-the-scenes footage from the game shows Randall objecting to being subbed out of the game, arguing with teammates during time-outs and constantly complaining to Bruton.

“I don’t want to play with (inaudible) he keep yelling at me,” he whines at Bruton in the latest episode Unrivalled, available to stream on Kayo.

“You’re not understanding, that’s not fair to me. You want me to stay calm?

A visibly frustrated Bruton responds: “Right now I want to focus on the game, can we play the game of basketball?”

“We’ll talk about it after the game.”

“The vibe of this team is not where it’s supposed to be, we’re fooling ourselves,” Franks said in the locker room.

“For us to be a championship team, we’re going to have to all rise together.”

Randall was sacked by the 36ers in November after six games.

“Craig’s an amazing player, one of the best scorers to come out to Australia and play,” Bruton said.

“But where we are right now, I feel we need to make a change that will help our group to continue our journey to reach our goals.”

“Internally there were some issues that happened in that game,” the coach added.

“It started in the pre-season and it snowballed at that point. It was a debacle.

“Everything that was brought on to the team after coming home. Playing at home, it was exciting but it was also, ‘What is going on?’ This is not the team I just had.

“Everyone’s itching to get on the scoreboard and ‘it’s about me’. This selfishness, which I knew it was coming but to not be focused, I mean there’s three scorers there.”

Bruton was referring to his imports in Randall, Franks and Antonius Cleveland, who had high hopes of being the best trio in the NBL.

In Randall’s place, the 36ers have recruited Ian Clark, who won an NBA championship with the Golden Station Warriors in 2017 and was a key part of the Sydney Kings’ NBL title-winning team last season.

Since Randall’s departure, the 36ers have clawed their way up to seventh on the ladder with nine wins to be in the playoff hunt.

The NBL has introduced a new play-in tournament this season, where the teams placed fifth and sixth on the ladder will get the chance to qualify for the playoffs.”

Watch the latest episodes of NBL Unrivalled on ESPN via Kayo.

From Will Smith’s Slapgate to Rebel Wilson’s surprise baby announcement, here are all the big pop culture headlines from 2022