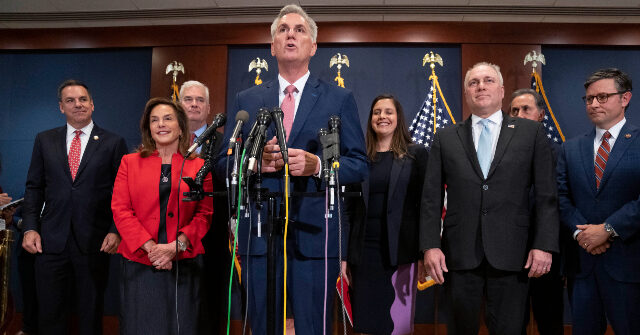 Republicans formally retake control of the lower chamber of Congress on Tuesday, as their new majority in the U.S. House of Representatives won in the November 2022 midterm elections is sworn in.

All eyes are on the speakership election, where House GOP leader Kevin McCarthy–the GOP conference’s nominee for Speaker–seeks to make it official and lock in the votes necessary to win the gavel. However, McCarthy has been fighting off a band of rebels working to prevent him from ascending to the position and it could derail the new Congress on its first day since nothing else can happen until a speaker is elected. To win, a speaker must earn the majority of votes of those who are present and voting for a person–nominated or not. Any absences or “present” votes lower the threshold by a half vote below what full House attendance–435 members–would require to achieve such a majority, which is 218 votes. Since one Democrat died in late November, the late Rep. Donald McEachin (D-VA), the number is already down to at most 434 members for full attendance–and could drop lower if more Democrats do not show up or vote present. If all the other Democrats show up, it would still require 218 votes to elect a speaker–and Democrats have said they will be at full attendance.

While McCarthy’s team is confident he will get there, it is possible he might not. If he does not get a majority on the first ballot, Congress will be paralyzed until a speaker is elected. The last time a speakership election went more than one ballot was a century ago, and back in the mid-1800s one speakership election went more than a hundred ballots and took months. One of McCarthy’s top critics, Rep. Matt Gaetz (R-FL), has said it might not be until the cherry blossoms bloom in the mid- to late spring at the end of March or beginning of April that a speaker is elected. While that would be a far-fetched scenario, chaos is certainly a possibility–or everything could go very smoothly for McCarthy. What happens on Tuesday remains to be seen.

Meanwhile, on the other side of the Capitol, Senate Democrats add one seat to their majority as Democrat John Fetterman formally takes office as a U.S. Senator from Pennsylvania. Democrats held onto their seats everywhere else, but Republicans were able to hold competitive seats in Ohio and North Carolina. Several new and exciting conservatives will join the Senate’s GOP minority formally on Tuesday, with Ohio’s J.D. Vance, North Carolina’s Ted Budd, Alabama’s Katie Britt, and Oklahoma’s Markwayne Mullin taking office in the 51-49 Democrat-controlled chamber. 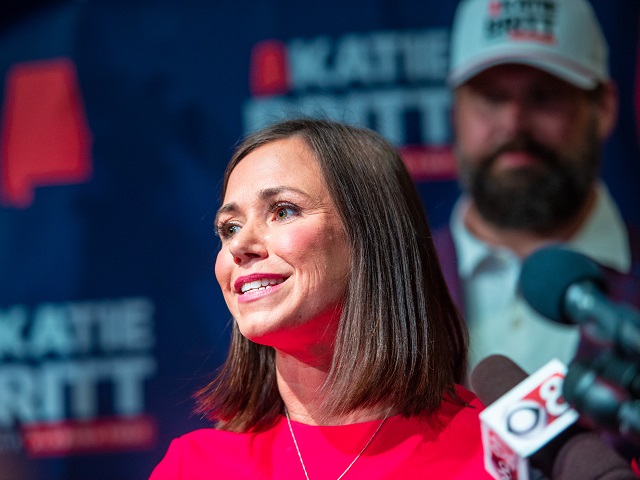 Follow along here on Breitbart News for live updates as the speakership election and other festivities of the day move forward on Tuesday, the first day of the 118th Congress of the United States of America.

Rep. Dan Bishop (R-NC) announces he is against McCarthy:

McCarthy, in remarks after the conference meeting of Republicans, noted he has the record for the longest speech on the floor of the House which he gave when trying to hold up Biden’s agenda last year. He said he does not mind setting a record for the most amount of votes to eventually get to the Speakership. McCarthy is quite clearly fighting this out all the way.

Breitbart News’s Ashley Oliver, who is in the Capitol reporting for us today, sends along this update:

Members have been streaming out of the conference meeting fired up to vote for McCarthy. Outside of the handful of Freedom Caucus defectors, conservatives like Rep. Marjorie Taylor Green (R-GA) and Ashley Hinson (R-IA) came out giving impassioned speeches vouching for the GOP leader. Rep. Thomas Massie (R-KY) said after the meeting he’d be voting for McCarthy too. Others are still in the meeting.

Rep. Lauren Boebert (R-CO) literally admitted in a press conference after the GOP conference meeting that she and others were moving the goalposts in what they were pushing for–she said she wanted a one-member threshold to engage in a motion to vacate the chair. She now says that staff agreed to that, but that she is instead now pushing for more. She added that McCarthy himself has not said that to her yet.

This could actually end very badly for the anti-McCarthy forces if they do not take the wins they have accrued in these negotiations. As Ryan Girdusky points out, a future person not named McCarthy could really screw over conservatives using this chaos as an example:

If McCarthy makes concessions and still doesn’t get anything from Freedom Caucus… what’s stopping the next GOP house leader w/ a big majority from saying F- the conservatives, I give them nothing?

Girdusky also rightly points out that Cammack is a serious player here and her being on McCarthy’s side is a huge deal:

Meanwhile, if they do end up taking out McCarthy, it is very likely that all of the concessions they have negotiated  from him will be erased with the next man up if that were to happen:

This is quickly spiraling out of control and will not end well for conservatives. @RepAndyBiggsAZ & Co. are on track to lose every single concession they got and the rest of us are facing two years of some Never Trumper as Speaker.

The Democrats are clearly enjoying the circus that the Republicans are creating:

In other words, Democrats intend to use these antics from anti-McCarthy Republicans to inflict as much pain as they possibly can on Republicans on day one of the new Congress.

McCarthy responded to Norman by saying–to wide-scale agreement in conference–that what he is planning on doing will hurt not just him but the whole conference:

McCarthy responds by saying: it’s not against me it’s against conference.

And other members loudly saying: it’s not against Kevin it’s for Dems.

This seems to be McCarthy’s strategy this morning at the literal 11th hour: Challenge critics and force them to tell their colleagues why they are doing what they are doing.

🚨🚨🚨NEWS — I just caught up w @GOPLeader on his way into the party meeting. I asked him what his goal is today

He is planning to take it to the House Freedom Caucus even though he’s down votes. pic.twitter.com/PavJV2qSNW

.@Kat_Cammack is bashing Freedom Caucus members coming out of conference mtg. “Kevin McCarthy will be speaker,” she declares

This is an interesting development. In conference, Rep. Ralph Norman (R-SC)–one of the original five anti-McCarthy votes–says he will vote for Rep. Andy Biggs (R-AZ) on the “first ballot”:

The “first ballot” is the key phrase here. He may be going to make his statement there, and then members may coalesce behind McCarthy on a subsequent ballot.

The lack of a serious plan from the McCarthy critics–as Breitbart News has extensively reported, they have no plan and never have had a plan and never intended to develop one–is causing major backlash against their cause from other House Republicans and even empowering people like Rep. Dan Crenshaw (R-TX) who is frankly reviled by many conservatives:

>@DanCrenshawTX just said HFC members opposing @GOPLeader are unproductive and have no plan.

The rank and file seems actively annoyed at the Biggs crowd, per a few sources.

It is very likely the more the McCarthy critics continue down the rabbit hole of illogical insanity steering Republicans towards chaos on their first day of their new majority that they end up paying some kind of consequence for their behavior. Rep. Mike Rogers (R-AL), who is likely to chair the House Armed Services Committee for instance, suggested they should lose any and all committee assignments:

!!! Rep. Mike Rogers says anyone that votes against McCarthy doesn’t get a committee, source in room tells me

Even if they succeed in stopping McCarthy in the end, it is very plausible and perhaps likely that whoever emerges as Speaker–McCarthy or otherwise–would take drastic actions to rein these people in.

This morning, House Freedom Caucus chairman Rep. Scott Perry (R-PA) laid out a list of demands that he said McCarthy did not agree to giving–sparking a battle between the two sides of the conference. McCarthy has now taken the fight directly to the membership of the conference in a closed-door full GOP conference meeting, and is winning broad support. He earned a standing ovation in the conference.

MCCARTHY to conference: “I earned this job. We earned this majority, and God dammit we are going to win it today.”

Also, last night–something McCarthy reportedly ousted in his speech this morning–several of the anti-McCarthy members admitted they did not care if Democrat leader Rep. Hakeem Jeffries (D-NY) won the speakership:

MCCARTHY now taking aim at Freedom Caucus, claiming they don’t care if Jeffries is elected over him

In a private mtg yesterday, GAETZ, BOEBERT, PERRY told McCarthy they wanted their OWN legal entity in House to wage lawsuits.

The group also told McCarthy that they don’t mind if the speaker vote goes to plurality and @RepJeffries is elected bc they’ll fight him. https://t.co/UMSJX0DmFI

But, in addition to that, McCarthy actually did make serious concessions to his critics–and they are now proving they are not interested in taking the wins they gained, but instead just burning it all down:

BIG APPLAUSE as McCarthy lists all the concessions he made to the right and says that HFC members don’t care if they elect @RepJeffries speaker.

He’s rallying the conference against the HFC

This is something that even Rep. Marjorie Taylor Greene (R-GA) has called them out over, insisting that they are clearly not interested in governing but instead just constant chaos:

MTG coming out of speaker’s office (where McCarthy has been working for the day): “My friends in the freedom caucus, they need to take the win”

While McCarthy still seems a long ways off from the votes he needs to win the gavel on Tuesday–quorum call on the floor is at noon–his critics are finally getting called to the mat and exposed for their antics.

Rishi Sunak’s popularity slumps amid storms over conduct of top Tories, strikes and…

Rishi Sunak’s popularity slumps amid storms over conduct of…