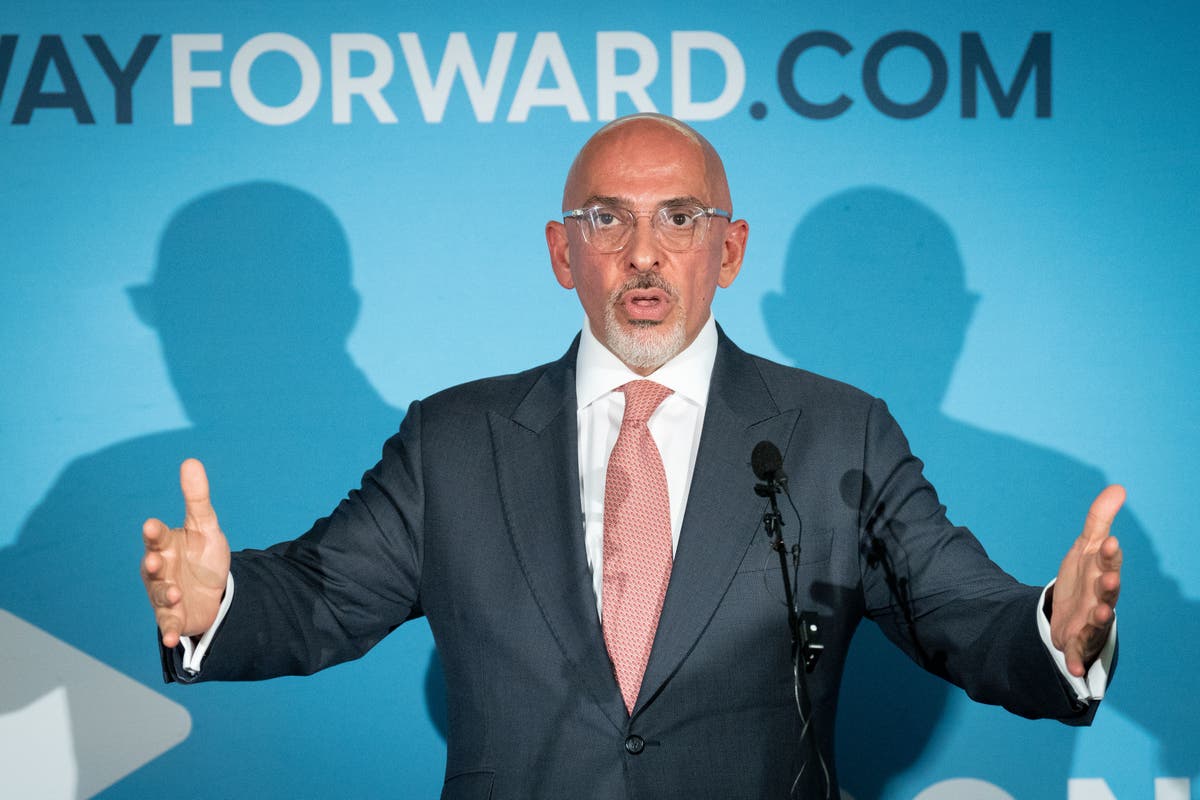 war of words erupted over “fairytale” tax cuts as Tory leadership contenders scrambled to get at least 20 votes from MPs today to enter the contest to succeed Boris Johnson.

Shortly before Rishi Sunak launched his official leadership bid, his successor as Chancellor Nadhim Zahawi took a swipe at him over their conflicting timetables for slashing taxes.

In the battle for the Tory Right, Foreign Secretary Liz Truss got a triple boost with the support of Culture Secretary Nadine Dorries, Brexit minister Jacob Rees-Mogg and Education Secretary James Cleverly.

In a new video early this morning, Mr Zahawi pledged he would deliver a “strong vision backed with solid philosophy”, including delivering benefits of Brexit — which many economists say has in fact hit Britain’s trade, reforming education and boosting defence spending in the face of threats from China and Russia.

“Of course, we need to reduce the burden of tax,” he said, having promised to lop 1p off the basic rate of income tax next year, and another in 2024 to get it down to 18p in the pound. “I believe cutting tax isn’t a fairytale but rather a critical step to tackle the cost-of-living crisis.”

His words were hitting back at Mr Sunak, who officially launched his leadership bid vowing: “We need a return to traditional Conservative economic values — and that means honesty and responsibility, not fairytales.”

He added: “Once we have gripped inflation, I will get the tax burden down. It is a question of ‘when’, not ‘if’.”

Mr Zahawi, Ms Truss and other candidates are pledging swifter tax reductions as millions of families and businesses across Britain struggle with the cost-of-living crisis.

Mr Sunak’s supporters, though, are likely to seize on comments from the Government’s fiscal watchdog, the Office for Budget Responsibility (OBR), that countries should not rely on tax cuts to try to grow themselves out of economic woes.

Its chairman, Richard Hughes, told Tory candidates offering to slash taxes that the promises had to “add up”, calling for them to be “realistic” and questioned whether they would stimulate economic growth in the long term.

Speaking this morning at an Institute for Government event in central London, Mr Hughes said: “Cutting taxes can provide some short term stimulus to demand but you have to remember they will be working against other things going on in the economy which are also weighing quite heavily on demand — rising inflation, rising interest rates and quite a lot of uncertainty about the medium term fiscal outlook.”

Mr Hughes said if the next Tory leader wanted to cut taxes they would either have to “revisit” public spending commitments, notably on health and social care, or rewrite the Government’s fiscal rules which seek to balance the budget for day-to-day spending by 2024-25 and to put debt on a downward trajectory.

“In that sense it’s important that these promises add up in terms of taking more risks,” Mr Hughes added.

Many Tory MPs and party members are calling for the tax burden, spiralling towards the highest since after the Second World War, to be rapidly lowered.

However, Lord Hague told Times Radio: “As many of them seem to invoke Margaret Thatcher… about how tax cuts got the economy going.

“I’m just pointing out that her view was that tax cuts have to be earned. You still have to have a country that is creditworthy… you can’t let the Budget deficit get completely out of control.

“Margaret Thatcher’s view was always good financial management eventually leads to tax cuts. It’s not that you solve all your problems that way.”

Some of the contenders were desperately seeking to get the 20-strong support by 6pm to formally enter the contest.

Lord Hague’s stance was echoed by former chancellor Ken Clarke who told the BBC’s Newsnight programme: “Whoever wins this post faces the worst economic crisis we have had for at least a generation, almost certainly a recession in the next few months. We have a war in Europe, we have serious problems in the health service and in the education service as well, and what we need is people to explain what their views are across those things, their serious views.”

Tax cuts would feed inflation, and risk leading to higher interest rates, and so should be brought in once it was under control and they could be “responsibly” afforded.

He argued that the Conservatives could win the next general election, expected in 2024, if “good government” leads to people being able to see that the “worst” is now over and things are getting better and the “tough” decisions were necessary.