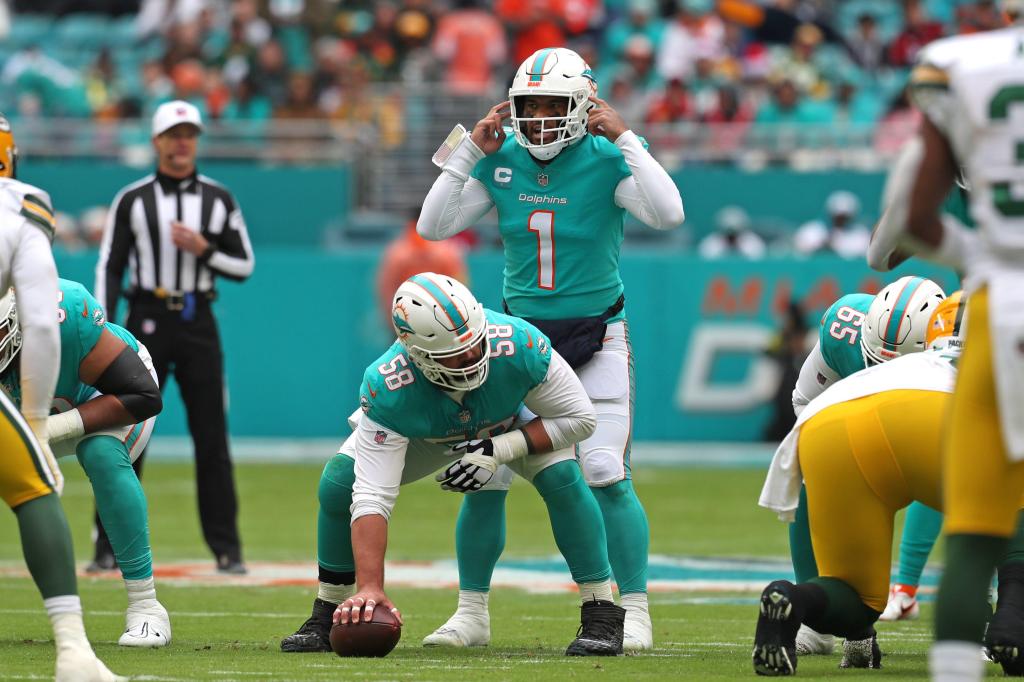 It’s been determined that Miami Dolphins quarterback Tua Tagovailoa showed no behavior consistent with head injuries nor reported symptoms of a concussion during the game against the Green Bay Packers on Sunday, according to NFL chief medical officer, Dr. Allen Sills, in an interview with NFL Network.

“There was nothing that would have triggered the protocol in the moment,” Sills told the league-owned network in an interview that aired Tuesday night.

That’s consistent with what Dolphins coach Mike McDaniel said when he revealed Monday that Tagovailoa entered concussion protocol after reporting symptoms the day after Sunday’s loss to the Packers while showing no signs during the Christmas Day game.

“No one recognized anything with regard to any sort of hit,” McDaniel said Monday. “I can’t really tell you exactly what [play] it was. I’m not totally positive on that, but it was something that he met with the doctors [Monday] and discussed some symptoms.”

Tagovailoa is yet to be publicly diagnosed with a concussion as of Tuesday night.

Sills said a small number of patients with concussions present symptoms on a delayed basis — hours or even several days after contact to the head.

Tagovailoa is already known to have suffered one previous concussion during the 2022 season, when he was hospitalized in the Dolphins’ Sept. 29 loss at the Cincinnati Bengals. Four days earlier, his head hit the ground in a win over the Buffalo Bills. While he appeared woozy and stumbled, he was later cleared to return to the game. There is video of Tagovailoa taking a blow to the head similar to the previous two when he was taken down on a pass near the end of the first half Sunday against Green Bay.

Sills said a small number of players will suffer more than one concussion in a season, and that anyone sustaining a concussion goes through the same five-step return-to-play protocol.

A player’s medical history is taken into consideration for clearance through protocol, according to an emailed statement from a league spokesperson to the South Florida Sun Sentinel in October.

The Dolphins’ official scenarios for clinching a playoff berth in Week 17, as released by the league:

— Win at the New England Patriots, plus a New York Jets loss or tie at the Seattle Seahawks;

— Tie against the Patriots and have the Jets lose, plus a Pittsburgh Steelers loss or tie at the Baltimore Ravens.

If the Dolphins (8-7) lose in New England (7-8), they need to win the home finale against the Jets (7-8) and have the Patriots lose at Buffalo in Week 18 to get in, regardless of New York’s result in Seattle.

If both the Dolphins and Jets win in Week 17, it creates a winner-take-all scenario for the final wild-card spot when the division rivals square off in the regular-season finale.

The Los Angeles Chargers’ playoff-clinching win Monday night win over the Indianapolis Colts eliminated Miami’s already-unlikely route into the postseason if the Dolphins win in New England but the Jets win out, including a win over Miami. The Dolphins would now be out in such a case.

The Dolphins activated left guard Liam Eichenberg off injured reserve Tuesday, the last day they had to make such a move after opening his 21-day window since being designated to return and resuming practice three weeks ago.

Running back Myles Gaskin, who missed the loss to the Packers with an undisclosed illness, was placed on IR in a corresponding move.

McDaniel has repeatedly said Eichenberg was playing some of his best football before suffering a knee injury in Miami’s Oct. 30 win in Detroit against the Lions.

Eichenberg’s activation hadn’t occurred in previous weeks due to the combination of Robert Jones playing well at left guard and team difficulties in identifying an available roster spot.

“He’s done a great job,” said McDaniel of Jones, the second-year lineman out of Middle Tennessee State. “And because of that, there’s a lot of things that go into activation of IR, and one of those is roster spots. And we have a good amount of good players on the team, so it didn’t make sense for us to go ahead and move on that early.”

When McDaniel was asked Monday if improvements can be made in the Dolphins’ process of reviewing replays and challenging calls on the field, he indicated that wholesale personnel changes wouldn’t be made but that the team can improve in that area.

“I’m happy with the guys that we work with and I expect that process to continually get better, regardless of what happens in the immediate,” Miami’s coach said. “I think you do it like everything else with regard to head-coaching responsibilities — you don’t just ever blow anything off, regardless of if it works in your favor or not. We’re always talking through, trying to get better at stuff so that the one thing you can control is not have something happen twice that maybe didn’t work out in your favor.”

In the Dolphins’ loss to the Packers, they didn’t challenge a 31-yard completion from Aaron Rodgers to tight end Marcedes Lewis, which preceded Green Bay’s tying touchdown two plays later. Replay appeared to show the ball moving and touching the ground as Lewis tried to control it.

“You’re always accountable for it,” McDaniel said. “It’s a fast-paced decision that you get one shot at, and they collectively didn’t think that there was information enough to overturn it.”

McDaniel is 0 for 3 on challenges in his rookie season as a head coach, missing on challenges in Weeks 2 and 3 against the Ravens and Bills, plus a challenge of a completed catch in the Dec. 11 loss to the Chargers.

On the flip side, not challenging the Lewis catch is one of at least four potential opportunities to get a call reversed where he has opted not to request a review. The others, although not all as consequential, were:

— A Trent Sherfield touchdown in the third quarter against Detroit that was ruled down at the 1-yard line (Alec Ingold punched in the score afterward);

— A Jaylen Waddle catch in the third quarter in Chicago that was ruled incomplete but could’ve been reversed to a catch and fumble out of bounds (Dolphins eventually scored via a Jeff Wilson touchdown despite missing the chunk play down the field);

— In the third quarter of Week 3, Buffalo’s Isaiah McKenzie was ruled to have picked up the necessary yardage on third-and-7 backed up in Bills’ territory, although he appeared short (Buffalo eventually kicked a go-ahead field goal after a drive that consumed 11:20 over 20 plays, 87 yards).

It’s also worth noting that fear of losing a second-half timeout factors into decisions not to challenge a third-quarter play.