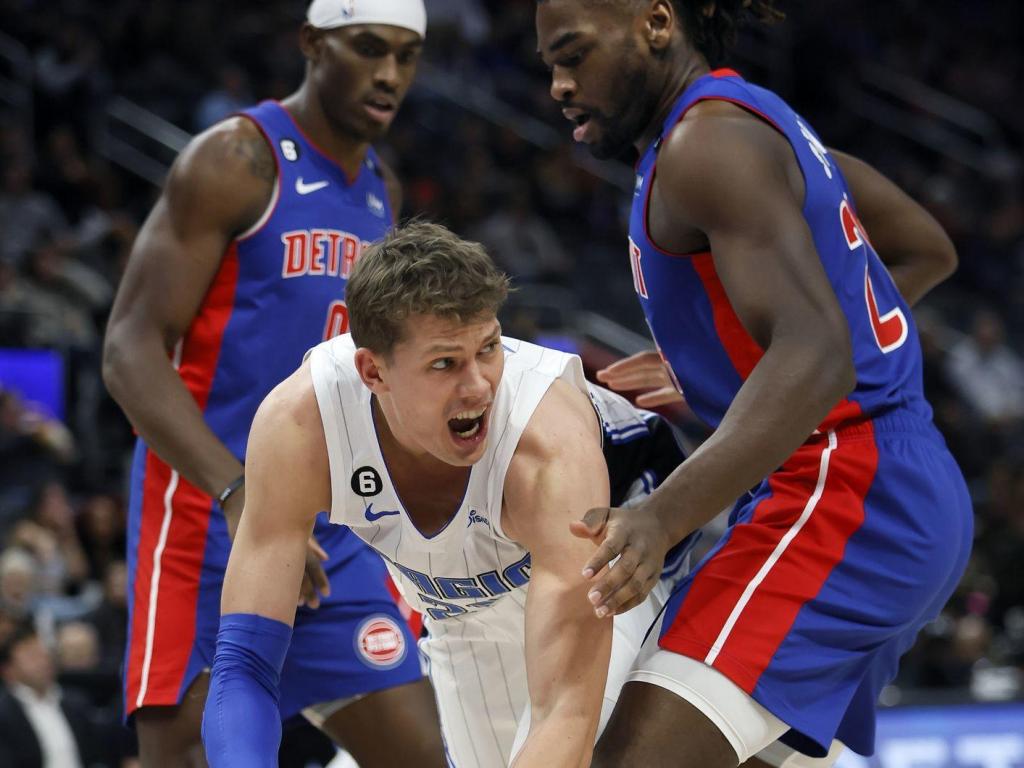 As the Orlando Magic shifted their focus to Friday’s home game vs. the Washington Wizards (15-21), they had to wait most of Thursday to know the fallout from their on-court altercation during Wednesday’s 121-101 loss at the Detroit Pistons.

The wait ended late Thursday evening for the Magic (13-23), who had nine players suspended for their roles in the incident, the league announced.

Moe Wagner was suspended for two games while eight other Magic players were issued one-game suspensions for leaving the bench area during the on-court altercation — a violation of the league’s rules.

Moe Wagner will serve his suspension starting on Friday and will serve the second game of the punishment in the Jan. 4 home game vs. the Oklahoma City Thunder at Amway Center.

Anthony, Bamba, Carter, Hampton and Gary Harris will serve their suspensions vs. the Wizards.

Schofield, Kevon Harris and Franz Wagner will serve theirs vs. the Thunder.

The suspensions are being staggered so the Magic will have eight available players — the league-mandated minimum for a team to play a game — for their next two matchups.

“During an altercation, all players not participating in the game must remain in the immediate vicinity of their bench. Violators will be subject to suspension, without pay, for a minimum of one game and fined up to $50,000.

Nearly the Magic’s entire bench left their side of the floor to help Moe Wagner at the Pistons’ bench during the physical confrontation.

“We’ll have to go back and look at the film to see exactly what happened,” coach Jamahl Mosley said after Wednesday’s game. “I was just worried and concerned about my guys that were down on the bench, down there making sure they got away from that side.”

Wagner was assessed a Flagrant Foul Penalty 2, which results in an ejection, for shoving Pistons guard Killian Hayes into Detroit’s bench on the sideline as Hayes was attempting to chase down a loose ball in Orlando’s backcourt with 33.2 seconds remaining in the first half.

The league said in their Thursday release that Moe Wagner committed “an unsportsmanlike act when he pushed Hayes into the Detroit bench while both players were pursuing a loose ball.”

The heated turmoil between the teams broke out after Wagner’s shove.

The entire Pistons’ roster surrounded Wagner before the Magic’s nearly entire bench — players and coaches — ran over to the Pistons’ side, leading to heated shoving and words exchanged.

A pair of Pistons assistant coaches covered Wagner up during the altercation before he was helped back to his feet and walked off the court. The officials reviewed the altercation for nearly 10 minutes before Wagner, Diallo, and Hayes were ejected.

Diallo and Hayes were deemed escalators of the confrontation and given technical fouls, resulting in their ejections.

The league suspended Hayes for the Pistons’ next three games while Diallo was assessed a one-game suspension.

“Honestly, don’t really want to talk too much about it,” said Franz Wagner, the younger brother of Moe. “Emotions are high in these games. People are going to look at the film and determine what’s right to do. It’s tough for us, especially in front of their bench, seeing one of our teammates have that happen to them.”

Terrence Ross was the lone Magic player who wasn’t already in the game that the Orlando Sentinel didn’t see leave the bench area.

“Obviously, we’re aware,” Franz Wagner responded when asked if the young Magic knew about the possibility of being suspended for leaving the vicinity of the bench during the altercation. “Normally, something like that happens on the court and not in front of one of the benches.

“Part of our worry as teammates is [we] don’t want [our] teammate alone amongst the whole other team. I don’t want to say what’s right or what’s wrong, but yeah.”

This article first appeared on OrlandoSentinel.com. Email Khobi Price at [email protected] or follow him on Twitter at @khobi_price.