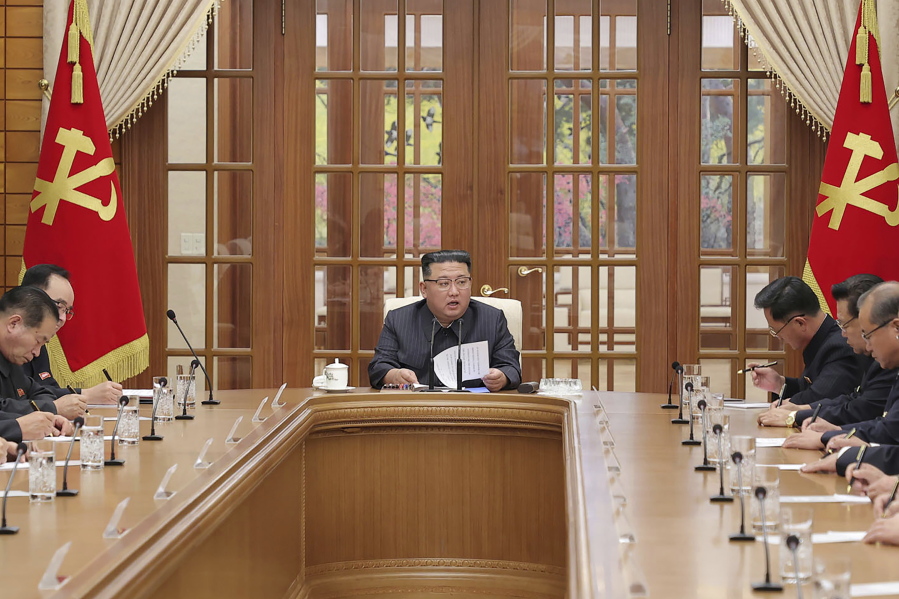 SEOUL, South Korea (AP) — North Korean leader Kim Jong Un called for a major political conference before year’s end at which he is expected to address his increasingly tense relations with Washington and Seoul over the expansion of his nuclear and missile programs.

North Korea’s state media said Thursday that Kim presided over a meeting of the ruling Workers’ Party’s Politburo in which members reviewed the implementation of state policies in 2022 and decided to hold a larger plenary meeting of the party’s Central Committee at an unspecified time in late December.

Kim in recent years has used political conferences in late December or early January to review state affairs and reveal his most important goals in economic and foreign policy and arms development. It’s possible that those meetings are replacing the function of Kim’s New Year’s Day speeches, which he has skipped since 2020 after using them for years to issue major announcements.

During Wednesday’s meeting in the capital, Pyongyang, Kim insisted that the country this year overcame “unprecedented adversity” in both internal and external circumstances to achieve progress in national development and elevate the country’s “prestige and honor,” the Korean Central News Agency said.

North Korea has ramped up missile testing to a record pace this year, exploiting a divide in the United Nations Security Council worsened by Russia’s war on Ukraine to speed up weapons development and dial up pressure on Washington and Seoul.

But Kim has also been struggling to improve a dysfunctional and heavily sanctioned economy made worse by pandemic border closures in recent years, an issue he may also address during the yearend meeting.

State media reports of Kim’s comments during Wednesday’s Politburo meeting did not include specific details of what would be discussed in the party plenary. They also did not mention any critical remarks toward Washington or Seoul.

KCNA said Kim described 2023 as a crucial year for accomplishing the goals set under a five-year plan established during a ruling party congress in January 2021, where he vowed to revamp the economy and bolster nuclear deterrent in the face of U.S.-led sanctions and pressure. During that congress, Kim issued a long wishlist of sophisticated weaponry, including more powerful intercontinental ballistic missiles, hypersonic weapons, nuclear-powered submarines, spy satellites and tactical nuclear arms.

Noting that 2023 is a “historic year” — the 75th anniversary of North Korea’s founding and the 70th anniversary of the end of the 1950-53 Korean War — Kim said a “decisive guarantee for the fulfillment of the five-year plan” should be laid out for the coming year, according to KCNA.

The dozens of North Korean missile tests conducted this year have included multiple launches of ICBMs with a potential range to reach the U.S. mainland and an intermediate-range missile flown over Japan. North Korea has also conducted a barrage of short-range launches it described as simulated nuclear attacks on South Korean and U.S. targets as it angrily reacted to the expansion of the allies’ combined military exercises, which North Korea insists are rehearsals for a potential invasion.

North Korea has punctuated its tests with threats of nuclear conflict with Washington and Seoul that communicated an escalatory nuclear doctrine. Its rubber-stamp parliament in September passed a law that authorized preemptive nuclear attacks in a broad range of scenarios, including non-war situations, where the country may perceive its leadership as under threat.

Kim’s expanding weapons program and increasingly provocative threats have raised concerns in South Korea, where some politicians and experts have called for the reintroduction of tactical U.S. nuclear weapons that were removed from South Korea in the 1990s, or for Seoul to pursue its own deterrents.

When asked about those calls during a news conference in Seoul, U.S. Ambassador to South Korea Philip Goldberg reiterated the United States’ commitment to “extended deterrence,” or defending allies South Korea and Japan with the full range of U.S. military capabilities, including nuclear ones.

Goldberg also stressed the importance of trilateral security cooperation among Washington, Seoul and Japan, and highlighted the increasing deployment of U.S. strategic assets to the region for training with allies.

“We are in constant conversations to discuss ideas from the (South) Korean government about how we can make more effective (our) extended deterrence,” Goldberg said, without elaborating.

Experts say Kim’s brinksmanship is aimed at negotiating economic and security concessions from a position of strength and forcing the United States to accept North Korea as a nuclear power. South Korean officials have said North Korea might up the ante soon by conducting its first nuclear test since 2017.

Kim Yo Jong, the influential sister of North Korea’s leader, said last month that the United States could never deprive the North of what she described as its right to self-defense “no matter how desperately it may seek to disarm” her country with “hell bent” hostility. Her statement came in response to the Biden administration’s push for U.N. condemnation of a North Korean ICBM test that month.

China and Russia vetoed a U.S.-led attempt in May to toughen Security Council sanctions on North Korea over its earlier ballistic tests. Experts say the North’s next nuclear test, which would be its seventh overall, is likely be the first in which the Security Council fails to respond with new punitive measures.

Nuclear negotiations between Washington and Pyongyang have stalled since 2019 over disagreements over the easing of crippling U.S.-led sanctions in exchange for North Korean steps to wind down its nuclear weapons and missile programs.

Kim used that test as an occasion to publicly unveil his daughter to the outside world for the first time as his military scientists pledged to expand the country’s nuclear might to protect future generations. His daughter’s appearance was seen as underscoring his previous pledges that he would never fully surrender a nuclear arsenal he sees as his strongest guarantee of survival.

Real-life Star Wars: The lunar landscape of Turkey’s Cappadocia will leave you moonstruck