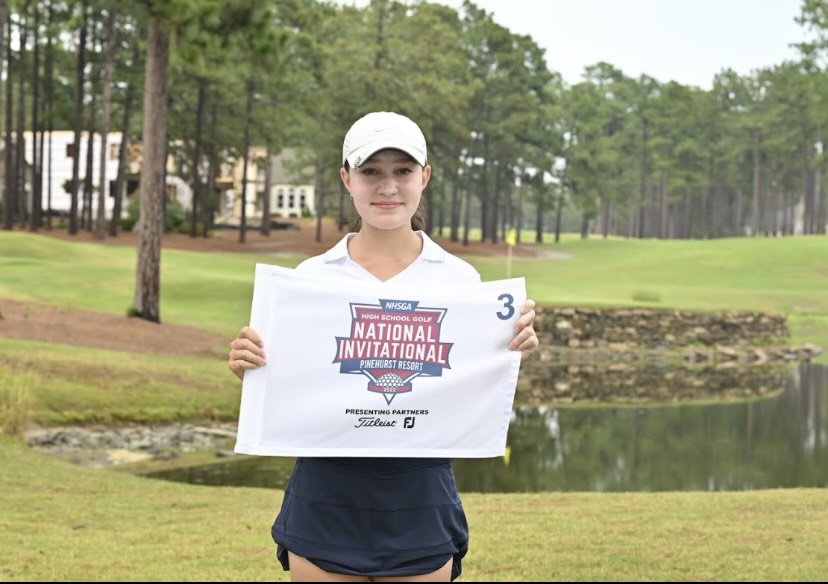 Isabel Brozena has golfed enough rounds in her young age to know that there are days when she isn’t going to bring her ‘A’ game to the course.

The North Reading rising junior also possesses that maturity which allows her to battle through those rare off rounds.

Nowhere was her grit and determination more apparent than at the NHSGA High School National Invitational at the renowned Pinehurst Golf Course in North Carolina. Fresh off winning the MIAA State Individual title, Brozena opened with a 77, putting her behind the proverbial eight-ball.

Rather than sulk her way through the final two rounds, Brozena responded in a championship fashion. She posted excellent scores of 68 and 70 to finish 1-under par, good enough to place third in a field of elite high school golfers.

“I was really happy in that I was able to bounce back,” Brozena said. “I proved to myself that I could shoot a 77 and still come back to put up a good score to finish third.”

Brozena has played more than her share of golf to know those things are going to happen. From the moment she first hit golf balls with her father Lee at a driving range, Brozena knew this was the sport for her.

“I loved it from the start,” Brozena said. “I started taking lessons at the Middleton Golf Couse and played in my first tournament at age 9 and I loved everything about it.”

Success followed Brozena at an early age. She won 10 events on the NEPGA Junior Tour in 2018 and added 10 more wins a year later where she placed in the top three in all 14 events she competed.

Brozena arrived at North Reading High with fanfare and she lived up to the preliminary hype. Competing with the boys in the fall, Brozena earned all-Cape Ann League honors and proved that she belonged.

“It was tougher because there are different skills involved,” Brozena said. “The tees are longer, but I think that helped me become a better golfer in the long run.”

With the MIAA not holding championships in 2021 due to COVID, Sandwich’s Emma Abramson and Ashland’s Keira Joshi teamed up to create a state championship of their own. Brozena was one of 32 golfers invited to compete and she ended her freshman year in style, winning the Massachusetts Girls Individual High School Championship, shooting a 75 at the Indian Ridge Country Club earning her a trip to this past year’s National High School championship.

Brozena’s defense of her championship began at the North/Central/West sectionals at Ellinwood Country Club in Athol where she took a fourth with a 77. That effort allowed her to qualify for the state championships at Eastward Ho in Chatham. Paired with fellow All-Scholastic Victoria Veator of Ursuline (who led the Bears to the state team title) and Joshi, Brozena shot a scintillating 1-under 72 to win the state title.

“I knew a lot of the girls who played there,” said Brozena. “I felt like if I went there and played well and put up a good score, I had a chance to win and I was able to do that.”

As has been the case with many top high golfers and tennis players, there is a train of thought that a student-athlete needs to compete away from high school in order to maximize their special talents. Brozena has heard those stories, but says she is perfectly happy at North Reading High School.

“I love playing for my high school,” Brozena said. “I know everyone at the school and it’s a good feeling to know that (by competing at North Reading) you are playing for something than yourself.”