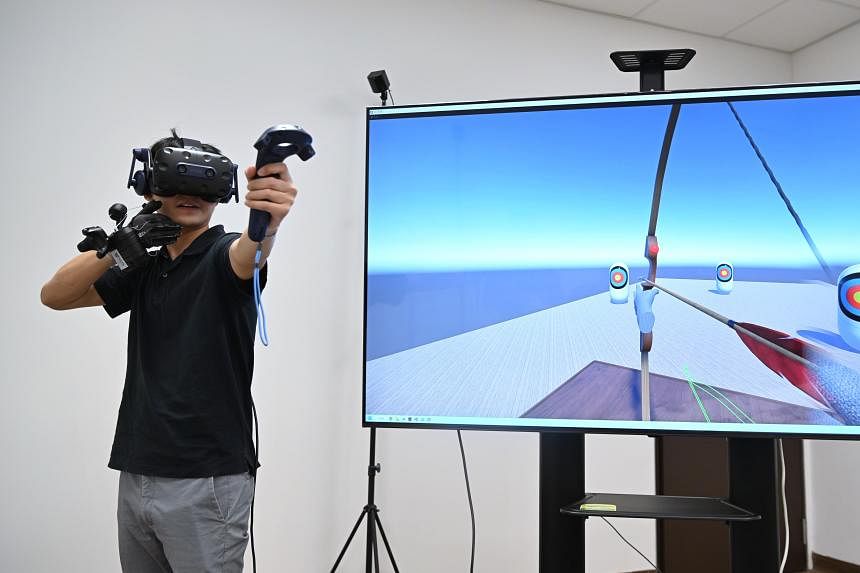 SINGAPORE – Developers from the National University of Singapore (NUS) have created a pair of haptic gloves that will soon be used for medical training in virtual reality (VR), to bring the metaverse experience closer to reality.

The HaptGlove devices are able to convey touch and grip when interacting with objects in the metaverse, such as when the user is checking for a pulse on a digital avatar, or making incisions with surgical tools.

The gloves are also untethered, needing no cables or bulky accessories to power them, which will give them an edge in usability over other haptic gloves now available, said research team member Yeo Joo Chuan from NUS’ Institute for Health Innovation and Technology (iHealthtech).

Dr Yeo said during a media showcase of the prototype gloves: “One thing that is missing from many gloves in the market is the sense of touch, as users will not be able to feel what an object is like in the digital world. This is the focus of our research, to provide an immersive experience in the virtual world.”

Such technology will give a boost to medical training, as training scenarios that are hard to come by in reality can be simulated in VR. Consultations with patients can also be performed in the metaverse, freeing up resources in the healthcare sector, said Dr Yeo, who is also the chief executive of VR sensor company Microtube Technologies.

The gloves, which will be used by trainees from the National University Health System within the next few months, use air pressure pads lining the fingertips of the gloves to create a sense of touch. They also use an in-built pneumatic mechanism that uses compressed air to tighten the flexibility of the gloves. This restricts the users’ hand movements, simulating grip.

The NUS team invited the media to have a hands-on session with the HaptGlove on Jan 13 to test its features in a series of demonstrations. I wore on my head a HTC Vive VR headset that was paired to a single HaptGlove on my right hand.

One of the tasks required me to distinguish a hard wooden ball from a soft sponge ball. I grabbed the first ball placed on a virtual table, which prompted the glove on my right hand to tighten gradually, signalling to me that the object I had picked up was soft. As I picked up the other ball, the glove instantly locked up to prevent my fingers from clenching further, as if I was grabbing a hard object.

The pressure pads on the glove would exert a satisfying tactile nudge on my fingertips each time I clicked the “next” button to move on to another activity. The glove could also simulate the feeling of gentle rain droplets and a balloon suddenly popping against my hand as part of the 20-minute demonstration.

The last activity was archery, requiring me to pick up an arrow, align it with the bow, aim and shoot at a target. The pulley mechanism on the glove would tighten each time I tugged at the string, convincingly creating a sense of tension even as I adjusted my grip and steadied my aim.

One drawback was that the glove would occasionally lag owing to connectivity issues, creating a delay between the action and the haptic response. The NUS team said that this will improve with further enhancements to the HaptGlove’s connectivity.