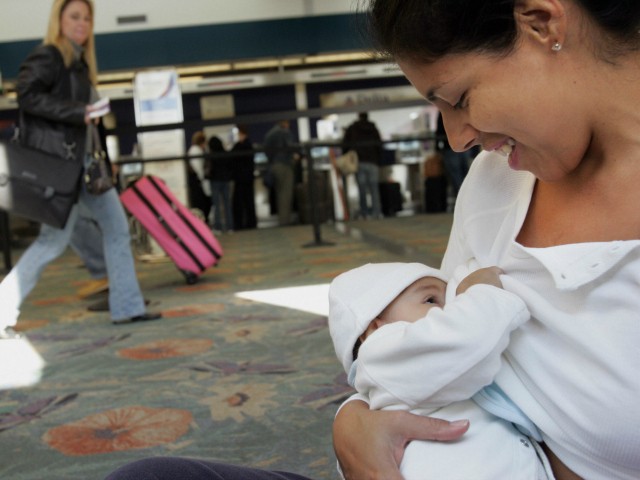 The New York Post Editorial Board on Wednesday pointed to the Times’ online quiz and accompanying poll of 4,000 adults as evidence that “the majority of Americans are not on board with this effort to warp the language to ideological ends.” Some of the jilted words include “chestfeeding,” “birthing parent,” and “Latinx.”

Americans reject the word “chestfeeding” the most, with 90 percent of poll respondents saying they would not use the term. Eighty-five percent of Americans still opt for the age-old term “breastfeeding.” “Chestfeeding” is a word transgender activists created in order to pretend that motherhood has nothing to do with being a woman. The UR Medicine defines “chestfeeding” as a “term used by many masculine-identified trans people to describe the act of feeding their baby from their chest, regardless of whether they have had chest/top surgery (to alter or remove mammary tissue).”

Another sterilized term Americans reject is “birthing parent” at 66 percent. “Birthing parent” is an obvious attempt by gender ideology purveyors to obscure the fact that only women can give birth. Americans instead prefer to adhere to biological reality by using the term “pregnant woman.”

Americans also are not buying far-left Democrats’ beloved term “Latinx,” an invented word which neuters “Latino” and “Latina” of their gender identifiers. The poll found that only 22 percent of poll respondents use the term, while 70 percent abide by the basic rules of Spanish, an inherently gendered language.

The Times tried to brush aside backlash against gender ideology as the result of a rightwing crusade, one of its headlines reading: “Despite the panic on the right, few have stopped using ‘woman.’”

“The panic on the right! As if it wasn’t the Times and progressives pushing this Newspeak in the first place,” the Post editorial board rebutted, referencing George Orwell’s 1984. “As usual, the left takes a radical position — erasing gender — then, when faced with resistance, frames it as ‘conservatives are outraged.’ No, as this poll shows, the majority of Americans are not on board with this effort to warp the language to ideological ends. This isn’t panic. It’s common sense fighting back.”