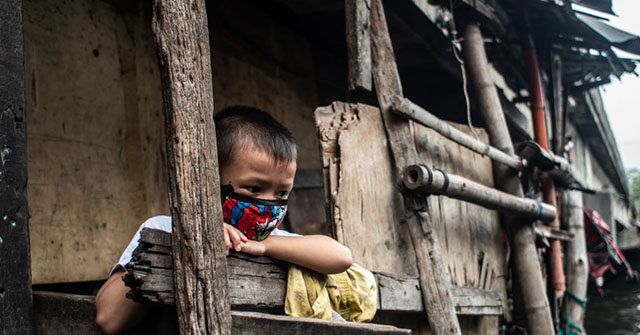 The BBC on Monday cited a recent study about child abuse surging in the Philippines during the Wuhan coronavirus pandemic as disturbing evidence of a problem that may have metastasized around the world.

The study was prepared by Save the Children and the United Nations Children’s Fund (UNICEF). UNICEF has previously reported on the “high prevalence of physical, psychological, sexual, and online violence committed on Filipino children.”

The trend appears to have grown steadily worse over the past decade and took an especially alarming turn during the pandemic. UNICEF noted the age of consent in the Philippines is only 12, one of the lowest in the world, and parts of the Philippines have experienced natural disasters and bouts of armed conflict that make children “more vulnerable to violence, trafficking, and stress.”

In July 2021, UNICEF said the Philippines “has emerged as the center of child sex abuse materials production in the world, with 80% of Filipino children vulnerable to online sexual abuse, some facilitated even by their own parents.”

In addition to the above-mentioned low age of consent — or, as the July 2021 report more broadly described it, the “absence of perceived conflict between sexual exploitation and significant social norms” — the Philippines also features low levels of computer literacy, easy access to Internet technology, and “well-established financial transaction facilities” to handle the commercial end of child sexual exploitation.

“Online payment facilities offered by banks and electronic payment services by mobile phone companies are surfacing as the new mode of monetary exchange for the conduct of OSAEC-related activities,” UNICEF explained. OSAEC stands for “Online Sexual Abuse and Exploitation of Children.”

The BBC on Monday quoted the latest study from UNICEF, which offered horrifying details about how the child abuse situation described in earlier reports exploded into a massive crisis during the Chinese coronavirus pandemic. To put it as simply and delicately as possible, Philippine children found themselves trapped indoors with people who had the time, inclination, and incentives to sexually abuse them and sell the videotaped atrocities online. Those people were quite often the parents of the abused children.

Fedalyn Marie Baldo, director of a home for abused children in Manila, told the BBC child sexual abuse has grown into a billion-dollar industry during her 17-year counseling career, and the Philippines is the undisputed capital of worldwide production. She explained that “grinding poverty, high-speed Internet access, and an ability to accept instructions in English have kept it all going.”

And then the pandemic hit, locking down Filipino homes and shuttering schools for over two years, leaving “vulnerable children stuck at home with cash-strapped parents desperate to raise money.” UNICEF estimates that about one in five Filipino children are now at risk of exploitation.

The BBC credited the new president of the Philippines, Ferdinand “Bongbong” Marcos, Jr. — son of the brutal dictator who ruled the Philippines with an iron fist from the 1960s to the 1980s — with attacking the child sexual abuse crisis more aggressively than his predecessor, the eccentric Rodrigo Duterte. In July, the month after Marcos took office, a tough new law against the online abuse of children went into effect.

“With children staying more in their homes, online platforms became a basic need for them to continue their education and maintain a sense of normalcy. Coupled with economic difficulties, this situation made it easier for OSAEC perpetrators to prey on children,” the Child Rights Network (CRN) said when promoting the new law, echoing the UNICEF investigation.

The BBC judged that while the Marcos administration is more willing to fight a war against OSAEC, it is losing. It still takes days or weeks to get the police to move against reports of child abuse, and it takes tremendous amounts of manpower plus international cooperation to take down child predators in sting operations, like a graveyard bust described in the article:

Amid the tombstones in this densely populated city, a family live among the dead. A 36-year-old mother is on her smartphone in a small wooden hut built against some of the largest monuments in the cemetery. She thinks she is messaging a paying customer in Australia who is requesting a live sex show involving her three children. In truth, her texts are going to an undercover police officer.

As she switches on the camera, around a dozen officers rush through narrow paths to her door. The only warning is when the stray dogs start to bark. She offers no resistance as a female officer takes the children to safety and others start to bag evidence: sex toys, smartphones, receipts detailing overseas payments.

Several of the BBC’s sources said only international efforts could hope to bring down the online child predator superstores that grew during the pandemic. Many successful prosecutions in the Philippines, including the graveyard operation described above, were made possible by tips from overseas.

On November 3, an Australian court handed down prison sentences of over 120 years to a man named Peter Gerard Scully and his Filipina girlfriend Lezyl Margallo for over 60 counts of child abuse, child pornography, human trafficking, and rape.

Scully was previously sentenced to life in prison in the Philippines along with a different live-in girlfriend named Carme Ann Alvarez. One of the children they were convicted of abusing was murdered and buried under the house they were renting. Another victim was an 18-month-old baby. Scully forced two other victims, cousins aged ten and 11, to dig their own graves, but they escaped before he could kill them.

Most of Scully’s hideous productions featured himself brutally raping the victims. Prosecutors said he had paying customers in Germany, Brazil, and the United States.

The Australian convictions of Scully and Margallo were hailed by the families of their victims as a “sweet victory,” and perhaps a turning point in the battle against OSAEC. It is a battle that clearly must be fought worldwide. The Philippines might be the worst incubator of abuse, but it is hardly the only venue where online culture, coronavirus lockdowns, and a growing drive to sexualize children came together over the past two years.