Patriots training camp countdown – No. 8: Can Cole Strange live up to his first-round billing? 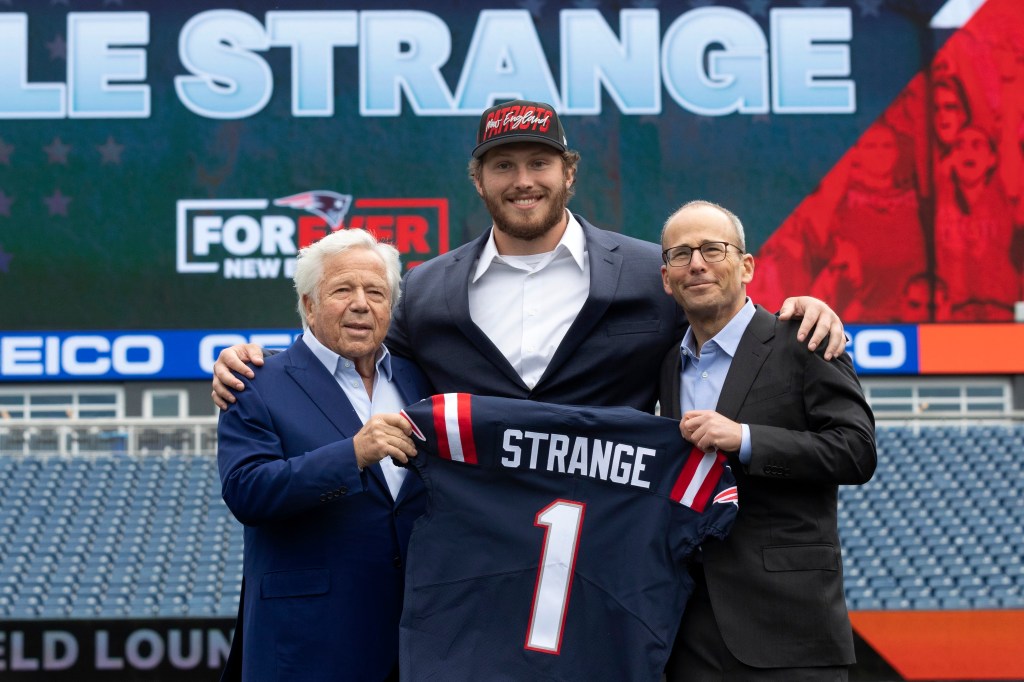 Each day leading up to the start of camp, the Herald will explore one of the biggest questions facing the Pats this summer. Several pertain to the defense, which lost longtime starters J.C. Jackson, Kyle Van Noy and Dont’a Hightower this offseason. Other questions cover the offense and coaching staff, which underwent a major makeover after Josh McDaniels left for Las Vegas.

Once the Patriots hit the practice field, here’s what they must learn before the season kicks off at Miami Sept. 11.

No. 8: Can Cole Strange live up to his first-round billing?

Pro Football Focus tabbed Strange “the biggest reach of Round 1” and “highly unlikely” as a major contributor early on the Patriots’ offensive line.

And, ESPN NFL Draft guru Mel Kiper gave the Patriots his worst overall draft grade, thanks in part to Strange’s selection in the first round.

Needless to say, the pundits had a field day with this pick.

But does that mean Strange is destined to join former first-rounder N’Keal Harry on the reject pile, eventually traded for a future seventh-round pick?

While one can certainly quibble over what round the Patriots could have, or should have landed Strange, the 6-foot-5, 307 pounder out of Tennessee-Chattanooga does have traits that could very well make him a fixture on the offensive line for many years to come.

Logan Mankins, a left tackle out of Fresno State, was a late first-round pick, and no one would dare suggest he didn’t live up to his first-round billing. His seven Pro Bowl appearances attest to that.

Strange could very well follow in his footsteps, and while it might be a reach to suggest he’ll have that kind of career, the 2022 Patriots first-round pick could still make a significant impact with the team. During minicamp, Strange was on the first unit at left guard. He didn’t look out of place sandwiched between center David Andrews and new left tackle Trent Brown.

In college, Strange played both guard spots along with left tackle. At the Senior Bowl, he had a good week against some of the best talents in the country. He also impressed, learning to play center while at the annual Mobile, Alabama showcase.

Charles Davis, a CBS Sports analyst who does commentary for NFL Network during the draft, wouldn’t be surprised if Strange eventually makes Belichick look good for making the pick where he did.

“With Cole Strange, I immediately likened it to Logan Mankins. When we were doing that draft, you tell me who had Logan Mankins sitting in that spot (at No. 32)? And that worked out pretty darn well,” Davis said when reached recently. “Their rankings are their rankings, not our rankings. They have conviction in what they do.

“Now the truth of the matter is, most people wouldn’t have been surprised to see Cole Strange go in the second. But I think it would have been the back-end of the second, when people would have thought, ‘OK, I kinda see that because of what the kid did, and his rise in terms of the Senior Bowl.”’

Strange has plenty of experience with outside and inside zone run-blocking schemes, which the Patriots appear to be moving towards. He is certainly a fit when it comes to the playing style and athleticism the Patriots traditionally look for in their offensive lineman.

He also plays hard to the whistle and carries a bit of a mean streak, another good quality when it comes to playing the offensive line. During minicamp, he got into a little dust-up with Matthew Judon while chasing a loose ball. While Strange might have been a bit overzealous charging for the ball in a non-contact setting, Judon came away impressed.

“He’s a young player,” Judon said. “He was trying to make a play. Great hustle from him. If you (saw) him, he sprinted from 30 yards away. Cole is going to be a player for us, and we’ve got to see how he develops.”

Getting a true gauge of Strange, however, won’t come until the pads come on during training camp, and later during the preseason games and joint practices.

“Cole could start right away. He could be an immediate plug-and-play guy. That’s how I look at it from the outside,” Davis added. “But let’s see how it goes, let him play, and see if it works toward (where he was selected). And if it doesn’t work, people will circle back later.”

Trainee flight attendant, 22, who had no clue she was pregnant gave birth on the loo

My dad vanished while snorkelling in Bali – I know…