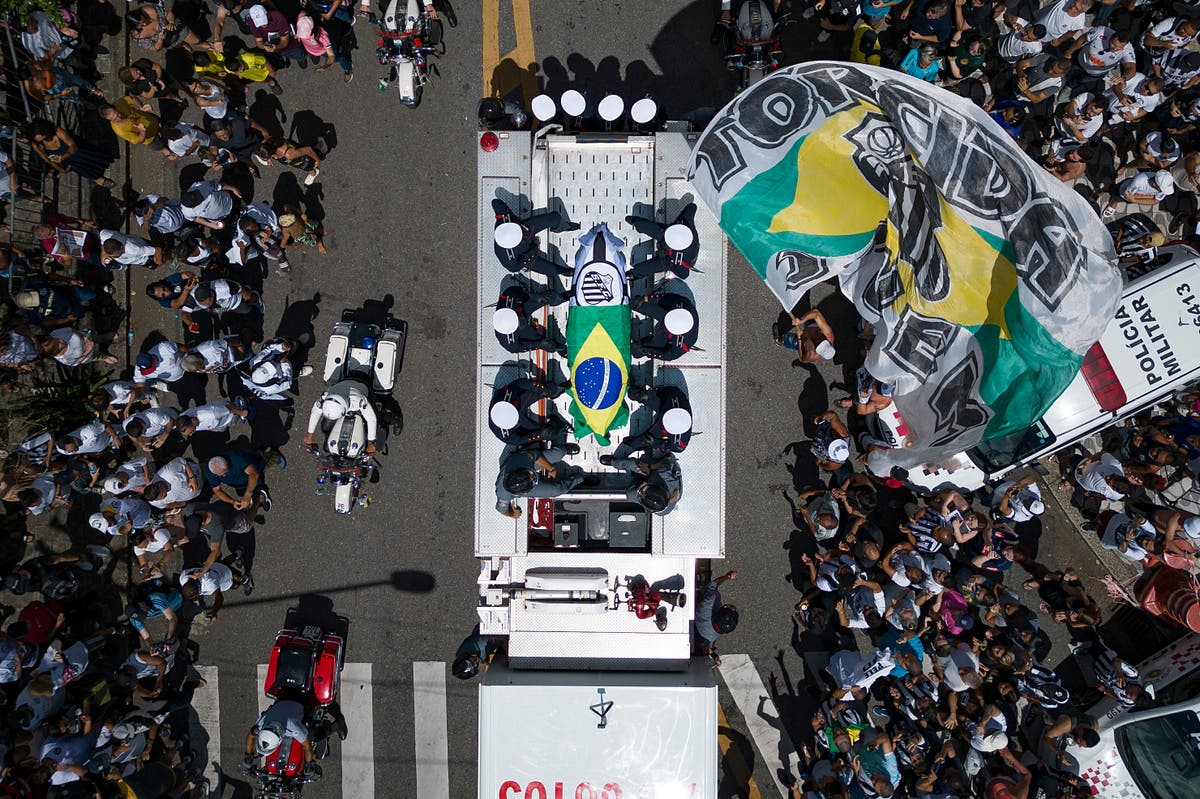 Brazilian football great Pele, whose full name is Edson Arantes do Nascimento, will this afternoon in Santos be laid to rest at the Memorial Necropole Ecumenical in a ceremony attended by just family.

It will follow a procession through the city where Pele made his name, with his coffin having been lying in state inside the stadium in Sao Paulo during three days of national mourning announced last week by the Brazilian government. Long queues had formed outside the stadium, with some fans waiting overnight for their opportunity to bid farewell to a player many consider the best to have ever lived.

Pele, who died on December 29 after a battle with cancer, reportedly chose his final resting place on the ninth of the vertical ceremony, allowing him to watch over the Santos stadium. Follow the latest updates from Santos as Brazil pays tribute to and lay to rest their great footballer.

Pele’s 102-year-old mother, Dona Celeste, is waiting for her son.

Further footage of the cortege.

Pele’s coffin has been placed onto a fire truck as it begins a journey through Santos, including past the house of his 102-year-old mother Dona Celeste.

Pele’s body is now being moved from the centre circle.

Pele’s body should soon be on the move as a proccession through the city, and towards the cemetery where he will be buried, begins.

Admittance to the wake has now been stopped.

It is estimated that more than 150,000 people, including President Lula da Silva, will have paid their respects to Pele in Santos, filing past Pele’s open casket at the Vila Belmiro stadium to bid a final farewell.

A 24-hour memorial service for Pele, who died last week at the age of 82 after battling colon cancer for a year, started at 10am local time on Monday and will conclude today, after around 24 hours of morning.

Neymar is unable to attend today’s funeral, so his father is attending in his son’s absence.

The Brazilian No.10 is reportedly unable to make the trip to Santos at short notice.

“Neymar will not be able to attend Pelé’s funeral,” Neymar Santos Sr revealed. “My son asked for me to come here in his absence.”

Millennial Money: Up the odds of meeting money goals in 2023