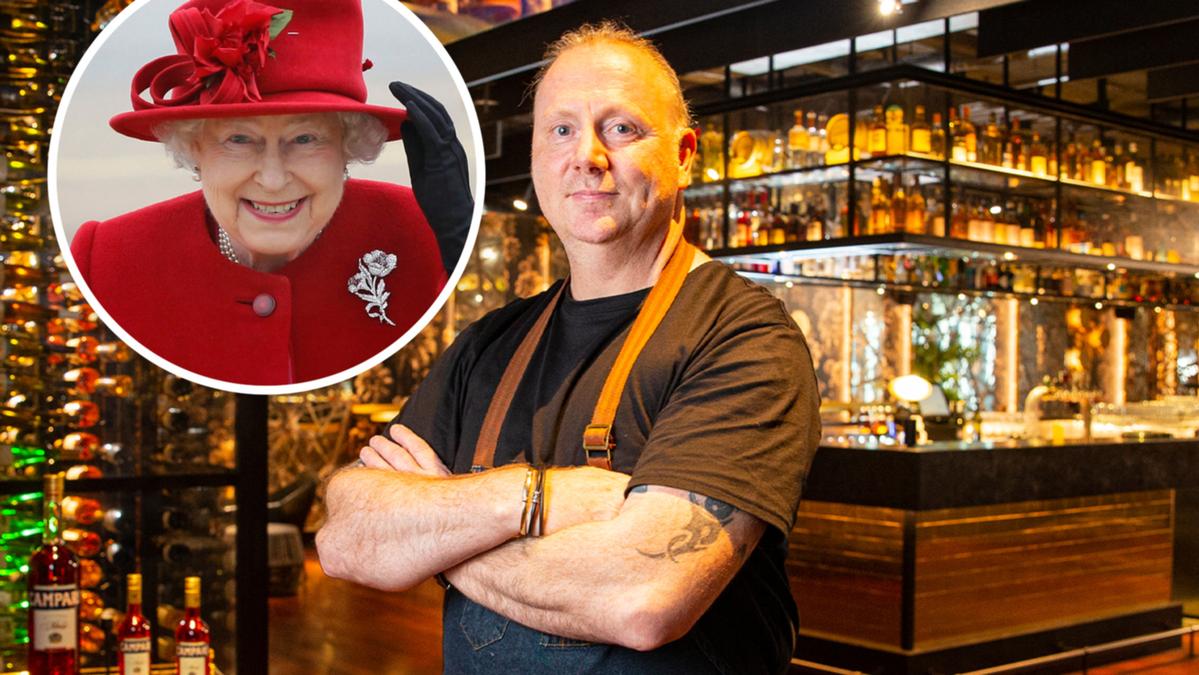 Standing out with his mum on a Bedford street, a seven-year-old Stephen Clarke busily waves a union jack flag at an oncoming vehicle. The car has its own fluttering flag, one rarely seen in Australia. So is the person who occupies the vehicle. As the Queen’s motorcade strolls past, Clark is living an once-in-a-lifetime opportunity.

What he did not know at the time was he would be cooking a meal for her 23 years later.

An accomplished chef newly engaged at Perth’s Santini restaurant, Clarke has cooked for many patrons over his decades-long career. Yet his encounters with the late monarch might be the most exceptional.

“Knowing the Queen is in the house, I think it’s an indescribable feeling.”

With her passing at age 96, he has decided to open up about his experiences dining Her Majesty.

After “falling in love” with cooking at a young age, Clarke first put his hand up to be a personal chef in 2000. What he did not initially realise is the position was for none other than the Earl and Countess of Lester.

Within his first week of arriving at Holcomb House, the Queen came for a dinner party. Already stressed with the occasion, Clarke was asked to serve a dish totally unfamiliar to him.

“We were going to be cooking grouse,” he said. “I was thinking ‘why can’t I have a fillet steak or could something that I knew?’

Despite the pressure, Clarke decided to make a bold move with the dessert.

“We were mixing things around like balsamic with strawberries. So I said I’ll make a balsamic and strawberry ice cream.”

The risk paid off. “Everybody ate it. Everybody loved that little bite of acidity with the sweetness of the strawberries.”

More than a decade later, he was asked to assist Government House when Her Majesty and Prince Phillip visited Perth for the 2011 Commonwealth Heads of Government Meeting.

The royal affair was not without its secrets. Clarke was asked to sign a confidentiality agreement prior to the event.

“It was a bit of a bummer, but it was nice to know what you were doing,” he said.

One of his most interesting experiences during CHOGM was with the Queen’s security. Standing in the kitchen at Government House, her butler was awkwardly guarding the mulled wine.

“I said to him ‘it’s okay Sir, would you like me to look after that for you?’ and he said, ‘oh yes please’. He put a little coaster on top just in case.”

He admitted his experiences with cooking for the monarch brought both a sense of pride and anxiety.

“When you come home after that day’s work to say to your loved ones, ‘look what we’ve just done today’, it’s quite surreal.”

Despite never getting the chance to meet the monarch, Clarke is grateful for the opportunity to be able to cook for her and is deeply grieved at her passing.

“I feel very saddened but a real sense of pride in what I’ve been able to achieve in my trade to be able to do what I love for somebody amazing like the queen is really being if you’d like the highlight of my career,” he said.

Thinking back to his first time seeing the late monarch during her 1977 Silver Jubilee tour, Clarke reflects on the impact she has had on his life.

“I never believed growing up that I’d have been given the opportunity to cook for the Queen.

“It’s been a hell of a career, and I’m very proud to have been able to achieve those heights.”

SATURDAY, IN A SPECIAL 32 PAGE COMMEMORATIVE LIFTOUT, THE WEST AUSTRALIAN PAYS TRIBUTE TO THE EXTRAORDINARY LIFE OF HER MAJESTY QUEEN ELIZABETH II. WE CELEBRATE HER LIFE, FROM EARLY CHILDHOOD AND HER ASCENSION TO THE THRONE, TO LIFE WITH HER BELOVED PRINCE PHILLIP AND FAMILY. DON’T MISS THIS SPECIAL EDITION OF THE WEST AUSTRALIAN ON SATURDAY.

Biden’s inflation law offers up to $14,000 for home upgrades. Here’s how to qualify.

Three Isis leaders in Syria ‘killed in US airstrikes…