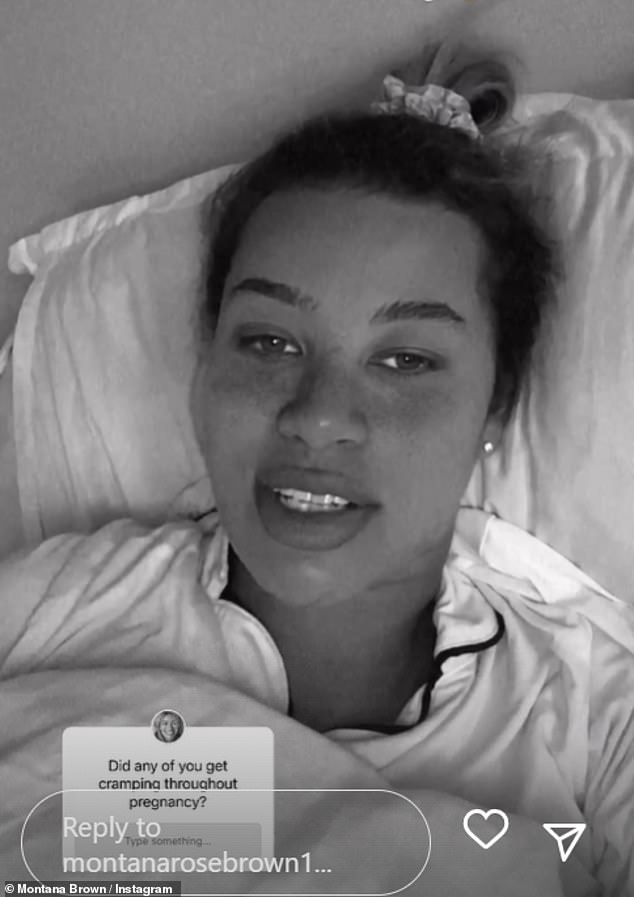 ‘I’m so tired all the time’: Pregnant Montana Brown says she has been experiencing bad cramps and they have ‘gone up a notch’

By Sean O’grady For Mailonline

Montana Brown has told how she has been experiencing bad cramps during her pregnancy.

The Love Island star, 27, who is expecting a baby with her boyfriend Mark O’Connor, said she is ‘tired all the time’ and wants to stay in bed.

Taking to her Instagram Stories on Saturday, Montana shared a video from bed asking her followers for advice.

Candid: Montana Brown has told how she has been experiencing bad cramps during her pregnancy

She said: ‘I was waking up last night because I had cramping. I’ve had cramps since the start and they feel like my normal period pains.

‘I don’t hear too many people talking about it during the pregnancy. It’s taken up a notch over the last couple of days unfortunately.

‘I’m so tired all the time and I don’t need an extra excuse to stay in bed because I was also a lazy b***h before pregnancy.’

The star announced her pregnancy on Christmas Eve as she shared her positive pregnancy test with her followers. 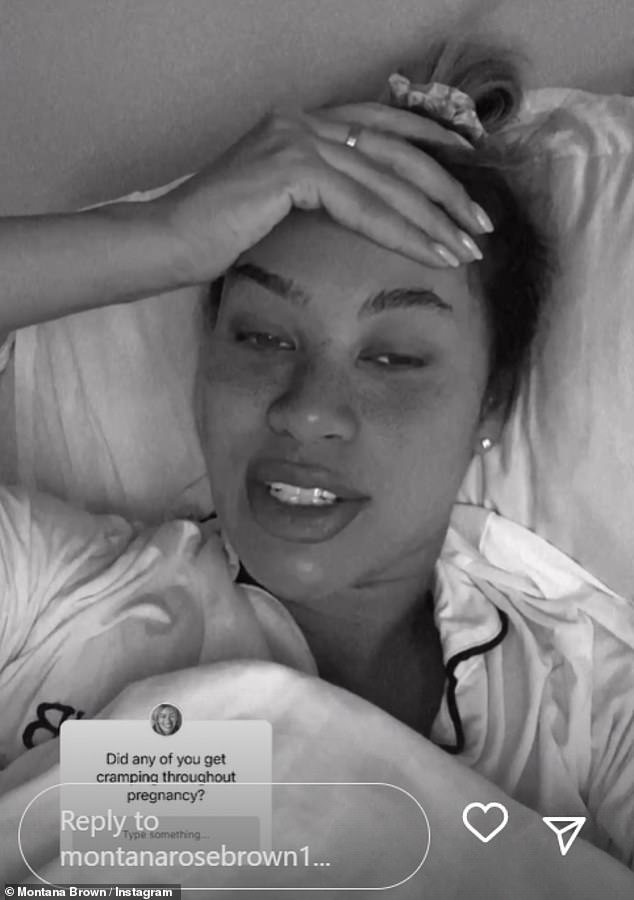 Mother-to-be: The Love Island star, 27, who is expecting a baby with her boyfriend Mark O’Connor, said she is ‘tired all the time’ and wants to stay in bed

Montana recently revealed she and Mark have not found out the gender of their child yet.

She penned: ‘Also we don’t know the gender for all those asking… lots of people say they can tell due to the bump which is cool.

‘I’m not sure if you can tell with my bump being quite small at the minute but I’d love to hear your theories! I feel like it may be a girl tbh just feeling in my bones! Place your bets!’

It comes after Montana admitted that she has ‘thought a lot’ about how her heritage and race will impact her unborn baby.

She said she sometimes forgets where she’s from after being raised in ‘predominantly white areas’ as she took to her Instagram Stories on New Year’s Day to share her thoughts.

Montana shared a snap of her blossoming baby bump while getting candid as she shared her musings about race and parenthood.

She wrote: ‘So excited for this new year, so many feelings ran through my head at the strike of midnight. I’m so excited and can’t wait for this new chapter. 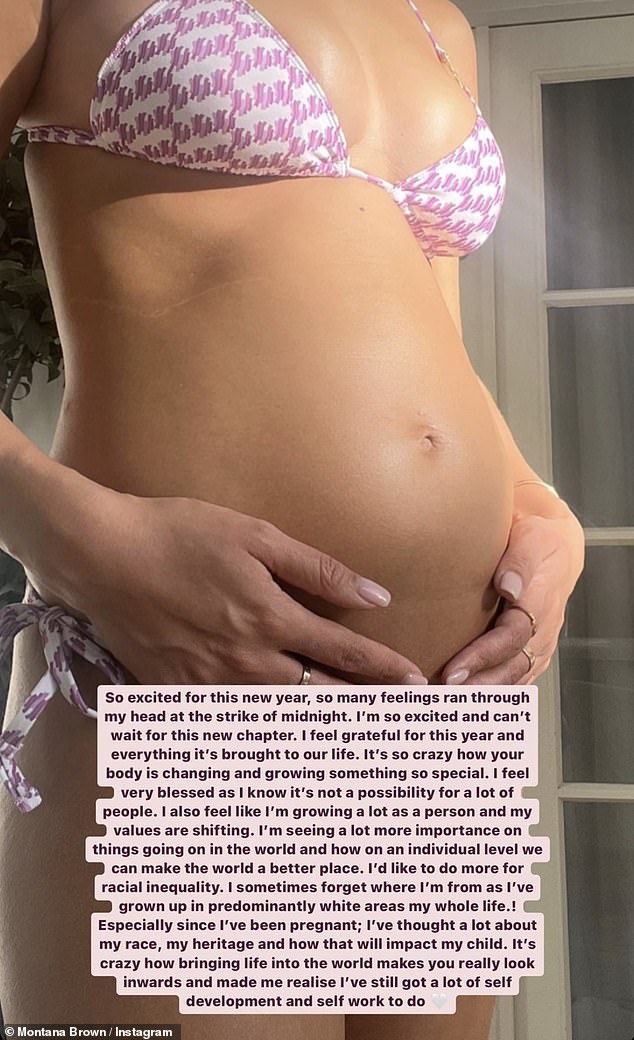 Candid: It comes after Montana admitted that she has ‘thought a lot’ about how her heritage and race will impact her unborn baby

‘I feel grateful for this year and everything it’s brought to our life. It’s so crazy how your body is changing and growing something so special. I feel very blessed as I know it’s not possible for a lot of people.

‘I also feel like I’m growing a lot as a person and my values are shifting. I’m seeing a lot more importance on things going on in the world and how on an individual level we can make the world a better place.

‘I’d like to do more for racial inequality. I sometimes forget where I’m from as I’ve grown up in predominantly white areas my whole life!

‘Especially since I’ve been pregnant; I’ve thought a lot about my race, my heritage and how that will impact my child.

‘It’s crazy how bringing life into the world makes you really look inwards and made me realise I’ve still got a lot of self development and work to do.’

It comes after the reality star revealed she was ‘so shocked’ to find out she was pregnant because she had been trying to conceive at the start of the year but it didn’t happen.

She took to Instagram to do a Q&A when she told how her and beau Mark struggled to get pregnant due to her low oestrogen levels.

Montana took to Instagram on Christmas Eve to share the jovial news of her pregnancy with her 1.2million followers.

She shared a video montage documenting the initial stages of her pregnancy, including her and her boyfriend grinning with their positive test.

Other clips in the post saw the reality star undergo an ultrasound scan and cosy up to Mark on the beach as he cradled her bump during a recent getaway.

Montana was seen lifting a small child into her arms, whose identity is unknown, before writing ‘Baby O’Connor’ in the sand. 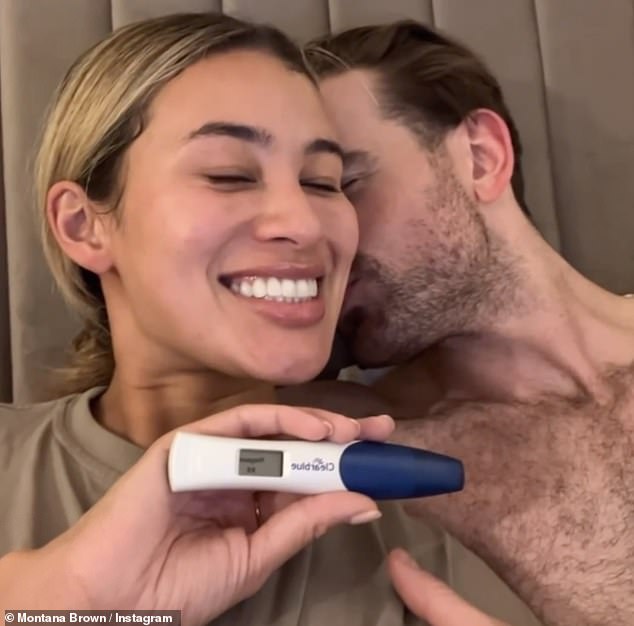 Loved-up: Montana took to Instagram on Christmas Eve to share the jovial news of her pregnancy with her 1.2million followers

Mardy Fish out as US Davis Cup captain before next matches