Québec solidaire is the preferred choice among province’s youth, but will they vote? 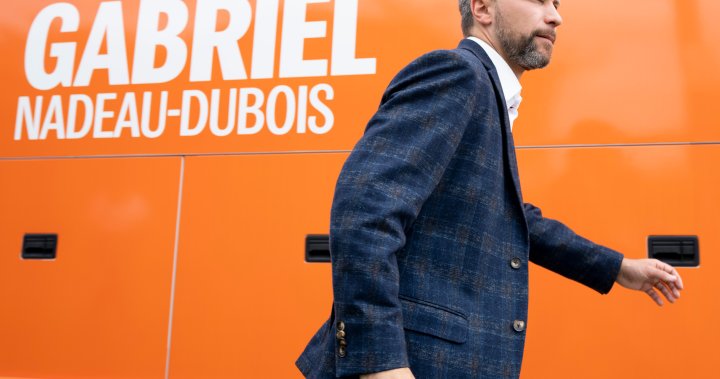 Gabriel Nadeau-Dubois stepped up to the lectern in a park in east-end Montreal on Wednesday, promising to deliver what he called a “transport revolution.”

With his forest-green suit and the St. Lawrence River as a backdrop, the 32-year-old co-spokesperson of Québec solidaire delivered the latest in a series of bold promises that have included a surcharge on SUVs and other polluting vehicles, new taxes on wealth and large inheritances and a promise to buy 10,000 homes to resell at a discount.

Young people, it appears, are listening.

While poll after poll puts François Legault’s Coalition Avenir Québec far ahead of the pack in the race to the Oct. 3 provincial election, the top pick for voters between the age of 18 and 34 is Québec solidaire, a left-wing sovereigntist party focused on climate change, wealth inequality and the housing crisis.

Nadeau-Dubois, who shares party “co-spokesperson” duties with Manon Massé, is a former leader of Quebec’s 2012 student protests. He’s counting on continued support from young, educated Quebecers, who are also the demographic least likely to show up at the ballot box.

While his promises have drawn scorn from his adversaries, Nadeau-Dubois isn’t afraid to say society needs to change if it wants to fight the climate crisis and pay for services for the elderly, among others. His party’s slogan, “Changer d’ére,” translates to “change the era.”

On Wednesday, he announced an eight-year, $47-billion plan to invest in the Montreal region’s public transit network through subway expansion, a new tramway and reserved bus lanes.

It’s the kind of promise that appeals to his young base, who helped propel the party to a breakthrough 10 seats in 2018, up from three the election before.

Danielle Pilette, an associate professor of strategy, social responsibility and environment at the Université du Québec à Montréal, says younger Quebec voters have been strongly influenced by the massive 2012 protests over proposed tuition hikes, in which tens of thousands of angry students followed Nadeau-Dubois into the streets.

4:42
From student activist to politician

She said the protests created an enduring interest in issues such as access to higher education and environmental causes and also led many to turn against the old-guard Liberals and Parti Québécois, who they saw as failing to respond to their concerns.

She said it’s no surprise that many of those voters are turning to Québec solidaire, which champions the environment and class equality. But she noted that young, educated voters are less “homogeneous” than older ones, which explains why some are turning to the “social order” promised by the Conservatives.

And any party depending on the youth vote has a difficult path to victory. Not only are they a smaller segment of an aging society, but they’re less likely to vote.

As Nadeau-Dubois delivered his transit promise in Montreal’s east end, his co-spokesperson was in Trois-Rivières and Quebec City, continuing her weeks-long tour of the province’s universities.

In an interview, Massé said her approach is to listen to what young people have to say and remind them that they can make a difference.

“Youth under 34 represent almost a third of Quebec’s electorate, and consequently if they vote they have the possibility of shaping the result of the vote,” she said in a phone interview.

“That seems to hit them as an argument, because I’ve seen in the last few days that they feel that their vote can count.”

Those who don’t vote, she said, usually tell her it’s because they don’t feel politicians care enough about the issues that are important to them, such as climate change.

While it may appear odd for the party to send a silver-haired 59-year-old to reach out to students, Massé said she was happy to relinquish the role of parliamentary leader and would-be premier to her younger colleague in order to focus on what she feels is her biggest strength: connecting with voters on the ground.

Pilette believes Québec solidaire has a strong base of passionate young supporters, and that getting them out to vote isn’t the party’s biggest problem.

The party’s challenge, rather, is appealing to older generations who will likely be put off by the more radical promises, such as a tax on wealth or inheritances over $1 million, she said.

She also believes the party may be relying too heavily on Nadeau-Dubois, who she feels cuts a more “dogmatic” and less sympathetic figure than Massé, who is known for being approachable and clear-spoken.

Nadeau-Dubois, at the park in Montreal, appeared to recognize the generational divide and called on his young supporters to appeal to their older family members to give his party a chance.

“Talk to your parents, go talk to your aunts, your uncles, your grandparents,” he urged them. “We need all generations to work together if we want to succeed in our fight against climate change.”