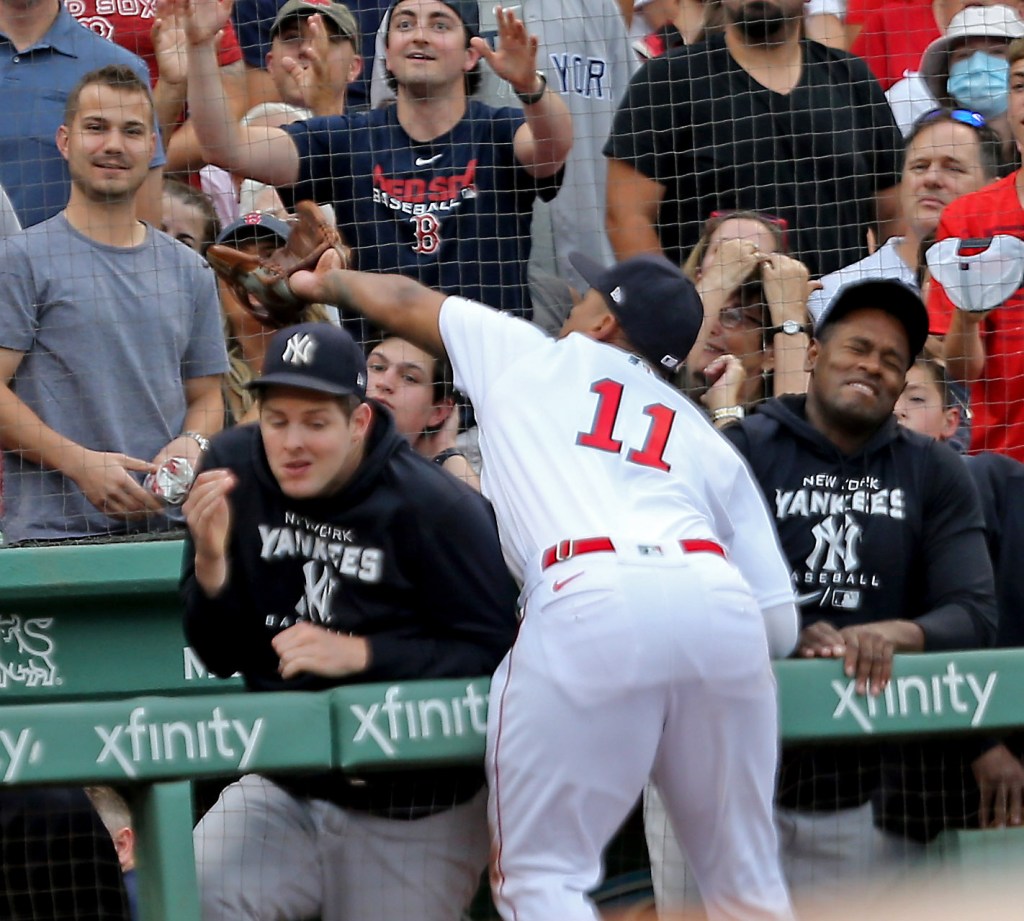 There was once again a flurry of roster activity ahead of the Red Sox’ Saturday night game with the Yankees at Fenway Park.

The pitching staff is in shambles and the position players are starting to feel the injury bug, too.

Rafael Devers, who hurt his back in Toronto last week and reaggravated it trying to make a catch along the dugout railing on Friday, was out of the lineup and won’t play again until Monday, at the earliest, manager Alex Cora said.

“We’ll see how he feels on Monday,” he said. “Got to take care of him. He’s been battling with this for a while and we have to be smart.”

It’s possible Devers could land on the injured list, but the Sox had yet to decide ahead of Saturday’s game.

Things got worse in the infield as Christian Arroyo was placed on the 15-day injured list with a groin strain. Infielder Jeter Downs was recalled from Triple-A Worcester. Downs was 0-for-4 with three strikeouts in his only big league start earlier this year. He’s hitting .217 with an .812 OPS in Worcester.

Without Devers and Arroyo, the Sox sent a less-than-ideal lineup for a crucial divisional game. They had Bobby Dalbec at third base and Christian Vazquez at first base with Kevin Plawecki catching. And with the Yankees starting left-hander Jordan Montgomery, Jackie Bradley Jr. was once again on the bench while Jarren Duran got the start in center and Rob Refsnyder started in right.

The Sox have yet to win a series against an American League East opponent this year. The best they could do was a series split entering Saturday.

“We worked so hard to get to this point and I think there’s only one team in the league that’s playing outstanding baseball and we’re playing them right now,” Cora said. “The rest of them are kind of in the same situation. There are a few teams getting hot and in the conversation now but we look at the standings and I know the season doesn’t end today but if it ends today we’re in the dance, so we look at the positives.

“And I think in ‘19 we ran into something like this. No David Price, no Chris Sale, we got banged up in August, we made a move then struggled.”

This time, Cora can take solace in knowing that Sale is set to make his season debut on Tuesday, Nathan Eovaldi is pitching Sunday for Triple-A Worcester and Garrett Whitlock is likely to make another rehab outing with Worcester on Tuesday.

Friday, Whitlock threw two innings, allowing two runs on six hits and striking out three while pitching out of relief for the Woo Sox in his first minor league rehab appearance since going on the injured list with hip inflammation in early June.

“He feels good,” Cora said. “Not happy with the results but the stuff was good. He was able to move around. I was joking around with him, he had to back up a few bases and it’s part of the rehab. There’s a good chance he will have one more. When? Probably not tomorrow. Probably Tuesday because they have Monday off. We’re still talking about it but he feels good.”

Until Whitlock returns, the Sox need to find a way to patch together games with the arms they have.

Hansel Robles was officially released on Saturday. Michael Feliz, who threw 3 1/3 innings in mop-up duty on Friday, was designated for assignment. And Connor Seabold, who started the game, was put on the injured list with a forearm extensor strain.

To replace them, right-handers Phillips Valdez and Kaleb Ort were promoted from Worcester.

The right-handed Ort was a minor league Rule 5 draft selection from the Yankees in 2020 and has been stellar for Worcester this year, striking out 47 batters in 34-2/3 innings with a 3.12 ERA.

“Throws 97 mph with a good slider, swing and miss stuff,” Cora said. “He’s been throwing the ball well down there. This is his chance to come here and do his job.”

Kiké Hernandez, who has been out since June 7 with a hip flexor strain, was feeling sore after making a rehab appearance with Worcester on Friday night. He’ll be shut down for the time being.

“He’s not playing today and we’ll see how he reacts to treatment and all that stuff,” Cora said. “Most likely he won’t play (Sunday). I don’t want to call it a setback yet but the fact that he’s not able to post, it’s just another obstacle, put it that way.”

So far, Devers has been the only Red Sox player named to the American League All-Star team. He’ll start at third base. The reserves and pitchers will be named on Sunday evening.

Cora said he thinks Xander Bogaerts, J.D. Martinez and Nick Pivetta have a chance to be selected, but he’s really pulling for Vazquez, who entered Saturday hitting .296, second only to Toronto’s Alejandro Kirk among big league catchers.

“I feel Christian should be in the conversation,” Cora said. “If you see the whole body of work, offensively and defensively, he’s been one of the best in the first half of the season.”

The series finale will be broadcast all over ESPN for their Sunday Night Baseball presentation. Alex Verdugo will be mic’d up for the ESPN call.

Karl Ravech, Eduardo Perez, David Cone and Buster Olney will have the call on the traditional broadcast on ESPN while YES Network’s Michael Kay and Alex Rodriguez will team up for the KayRod Cast on ESPN 2.

What S’pore can learn from Australia in combating online harms