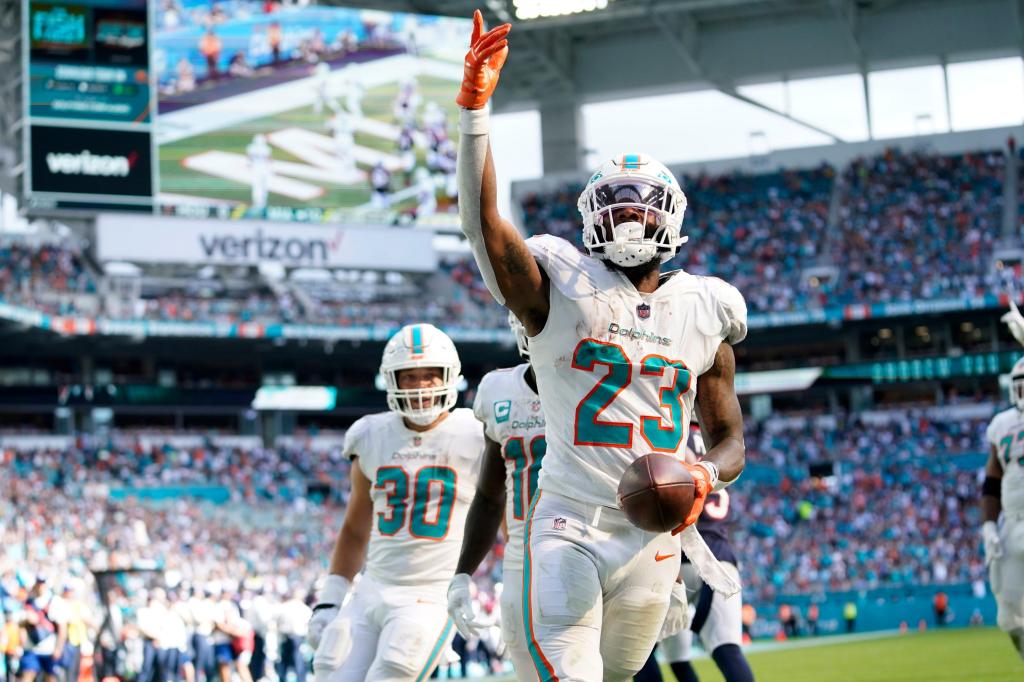 Before quarterback Tua Tagovailoa threw three fourth-quarter interceptions and the Green Bay Packers ending their 26-20 win Sunday over the Miami Dolphins with 16 unanswered points, the Dolphins were in prime position. They led, 20-10, with a chance to add to it before halftime, driving around midfield.

On the first play following the first half’s two-minute warning, running back Raheem Mostert ran between the tackles and lost a fumble that was forced and recovered by Green Bay’s Jarran Reed.

Instead of Miami extending its lead, the Packers’ Mason Crosby connected on a 46-yard field goal with two seconds left before intermission, and Green Bay was already getting the ball to start the second half.

Packers quarterback Aaron Rodgers led an 11-play, 78-yard drive that took 7:07 off the clock to start the second half, and running back A.J. Dillon scored a 1-yard rushing touchdown.

The Dolphins’ 10-point lead was suddenly erased. Miami kicker Jason Sanders missed a field goal that could’ve given the lead back to the Dolphins. Green Bay added a pair of short field goals from Crosby and intercepted Tagovailoa three times in the final period.

“Can’t turn the ball over, and I got to do my part to not contribute to that,” said Mostert, who finished with 45 yards on eight carries. “I’m going to go back to the drawing board. I’m going to revamp what I got going on.”

Miami, after hitting big plays in the first half, including a season-long 84-yard touchdown from Tagovailoa to Jaylen Waddle and a 52-yard pass to Tyreek Hill that set up a 1-yard Jeff Wilson touchdown, could not sustain drives in the second half.

“They didn’t do anything new or different,” Tagovailoa said of Green Bay. “They were playing the same defense, the same way that they played in the first half. Offensively, we just didn’t capitalize on our opportunities, and we were killing ourselves with a lot of the penalties that happened off of explosive plays.”

Added coach Mike McDaniel: “It was really the self-inflicted wounds for this game that really cost us.”

Earlier, left tackle Terron Armstead committed a holding penalty, and center Connor Williams was also called for a hold during a two-play sequence where he snapped the ball high to Tagovailoa on the ensuing play.

The Dolphins got running Wilson to return to the backfield for Sunday’s loss.

Wilson missed last week’s loss at the Buffalo Bills with the hip injury he suffered in the Dec. 11 loss in Los Angeles to the Chargers. He entered Sunday questionable after being limited in practice this past week.

With Wilson back, Mostert still started Sunday coming off his 136-yard output last week at Buffalo. Mostert kept that up early with runs of 14 and 17 yards before Wilson got into the action. Wilson scored a 1-yard touchdown in the second quarter.

Mostert averaged 5.6 yards per carry, collecting 45 on his eight attempts, but did have the costly fumble. Wilson went for 37 and the short touchdown on his nine carries.

Armstead (toe/pectoral/knee), outside linebackers Bradley Chubb (knee) and Jaelan Phillips (toe) and safety Eric Rowe (hamstring) — who all also entered questionable — were active Sunday and started. Chubb injured his hand and later returned with a club around it.

Running back Myles Gaskin, who was questionable with an illness, was inactive. Tackle Eric Fisher and wide receiver River Cracraft, both who entered doubtful with calf injuries, were also out. Miami elevated veteran tackle Kendall Lamm and undrafted rookie wide receiver Braylon Sanders from the practice squad. Lamm did not play.

Healthy Dolphins inactives are quarterback Skylar Thompson, wide receiver Erik Ezukanma, tight end Tanner Conner and cornerback Noah Igbinoghene. Teddy Bridgewater was available to be Tagovailoa’s backup quarterback after missing the past five games with a knee injury, but he did not play.

The Dolphins hosted their second-coldest home game in franchise history Sunday with a kickoff temperature of 46.

Sunday’s “feels like” temperature in Miami Gardens was 40 degrees.

The Dolphins’ Week 17 game at the New England Patriots (7-8) will not be flexed into a Sunday night matchup.

The NFL announced a move to insert the Pittsburgh Steelers game against the Ravens in Baltimore into the NBC prime-time slot, moving the all-Los Angeles pairing of the Rams and Chargers to 4:25 p.m. Dolphins-Patriots will remain a 1 p.m. kickoff.

It was an intriguing decision, given that the Steelers, who kept playoff hopes alive in Week 16, could be eliminated before the Sunday night kickoff.

What is Apple Fitness+? | Evening Standard