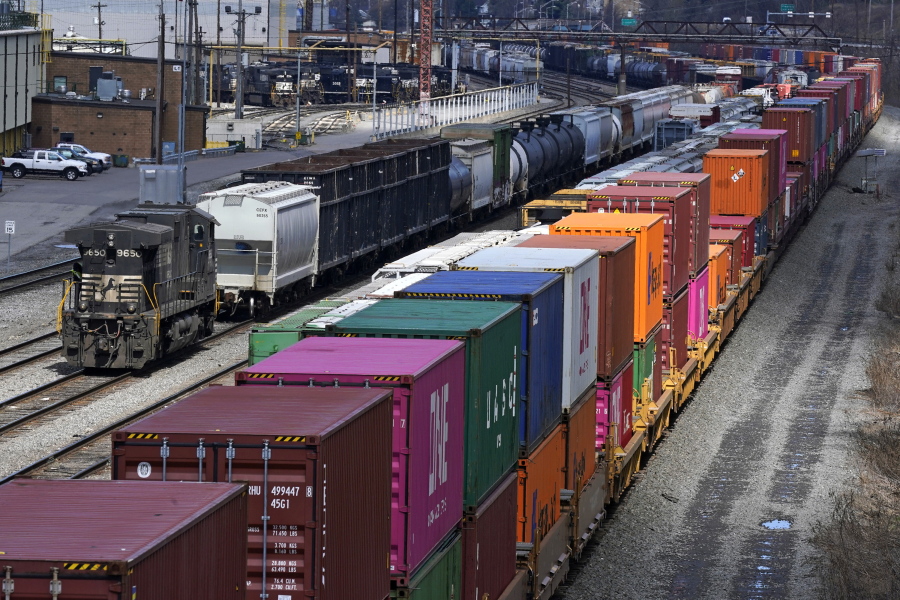 OMAHA, Neb. — Railroad unions on Tuesday decried President Joe Biden’s call for Congress to intervene in their contract dispute, saying it undercuts their efforts to address workers’ quality of life concerns, but businesses stressed that it is crucial to avoid a strike next week that would devastate the economy.

Biden and House Speaker Nancy Pelosi said that lawmakers will be asked to vote this week to impose the terms of the deals the 12 unions agreed to before an original strike deadline in September, even though four of those unions representing more than half of the 115,000 rail workers rejected them. Eight other unions ratified the five-year deals that include 24% raises and $5,000 in bonuses.

Biden said he reluctantly agreed that it would be best to override the union votes because the potential damage to the economy would be too great.

“Congress I think has to act to prevent it,” Biden said Tuesday. “It’s not an easy call but I think we have to do it. The economy’s at risk.”

Unions and worker groups have been pushing to improve the demanding schedules they say make it hard for workers to ever take a day off and persuade railroads to add paid sick time. They have threatened to strike if new agreements can’t be reached before a Dec. 9 deadline.

“It is not enough to ‘share workers’ concerns’,” said the Brotherhood of Maintenance of Way Employes Division union said in a statement. “A call to Congress to act immediately to pass legislation that adopts tentative agreements that exclude paid sick leave ignores the railroad workers’ concerns.” The union is one of the four that rejected their deal.

The railroads that include BNSF, Union Pacific, CSX, Kansas City Southern and Norfolk Southern have refused to consider adding sick time because they didn’t want to spend any more on the labor deals than they agreed to in September. They have also argued that rail unions have agreed over the decades to forego paid sick time in favor of higher wages and stronger short-term disability benefits.

Conductor Gabe Christenson, who is co chairman of the Railroad Workers United coalition that includes workers from all the rail unions, said Biden and the Democrats are siding with the railroads over workers.

“The ‘most labor-friendly president in history’ has proven that he and the Democratic Party are not the friends of labor they have touted themselves to be,” said Christenson, whose group encouraged workers to reject these deals. “These wolves in sheep’s clothing have for decades been in bed with corporate America and have allowed them to continue chipping away at the American middle class and organized labor.”

Paul Lindsey, a longtime Union Pacific engineer based in Pocatello, Idaho, who is active with Railroad Workers United, said Congress and Biden seem to be sending the message that “your quality of life, your time off, your days, your standard of living doesn’t matter if you getting a pay increase is going to hurt business.”

But business groups that have been pressuring Congress and Biden to intervene in the talks praised the president’s decision and said they hope Republicans and Democrats can work together to resolve this quickly.

A rail strike would affect nearly every industry because so many businesses rely on railroads to deliver their raw materials and finished products. The railroads have estimated that a strike would cost the economy $2 billion a day and could force many manufacturers to shut down and lay off workers. Plus, commuter railroads and Amtrak would be disrupted because many of them rely on tracks owned by the freight railroads.

Mike Seyfert, CEO of the National Grain and Feed Association, said the widespread severe impact that’s expected if there is a rail strike should inspire bipartisan agreement among lawmakers. The impact of a strike would begin to be felt up to a week before the deadline because railroads would begin halting shipments of hazardous chemicals and perishable products ahead of time to ensure they wouldn’t be stranded along the tracks.

“Last time I checked, every constituent of every member of the House and Senate has to eat,” Seyfert said. “And so I would think that when you look at potential impacts to the food and ag supply chain hopefully that would help to move this agreement along.”