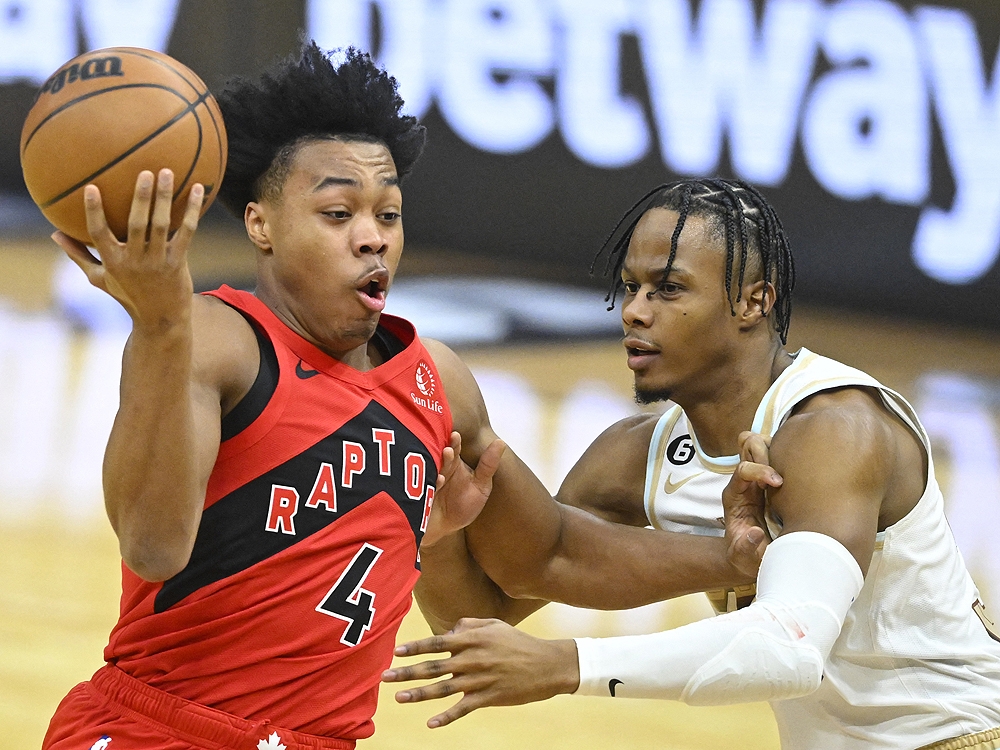 After countless games where shots simply would not fall, things went quite a bit differently for the Raptors in Cleveland on Friday night.

The visitors dropped trey after trey, particularly in the first half, against one of the East’s better clubs, improving to a surprising 3-0 against the Cavaliers with a 118-107 victory.

It was the second win in three games to conclude a road trip that had begun with the team’s sixth straight loss.

After going off for 52 points in that one, Pascal Siakam carved up an opponent in a different way, collecting seven quick assists in the game as his teammates finally started connecting. Siakam finished with 26, along with nine assists and eight rebounds.

Meanwhile, Scottie Barnes bounced bounced back in fine fashion from one of the worst performances of his career. Barnes scored 11 quick points, looking particularly engaged and aggressive against last year’s rookie of the year runner-up Evan Mobley and finished with 25, along with 10 rebounds. O.G. Anunoby added 26, Fred VanVleet 18 as the Raptors hit a season-best 19 three-points.

Toronto led by 16 after two quarters, largely thanks to 12 made threes, more than they’d managed total in most of their previous 17 games.

The Raptors needed the intensity of Barnes, since a 20-point lead after three got whittled down to 10 when Cleveland hit 10-of-11 shots to start the fourth. When Cleveland finally went cold, that was that and so was the team’s five-game winning streak.

Darius Garland led Cleveland with 17 points, but the team missed 22-of-33 three-point attempts.

Toronto improved to 15-18 and handed Cleveland a third of its 12 losses this season.

The Raptors got a large boost from Malachi Flynn, who continues to play well. Flynn hit three three-pointers of his own. In fact, Flynn and the bench had more points midway through the second quarter than they’d managed in the entire game against the Knicks. And that was with Nick Nurse choosing to sit out his best reserve for the season, Chris Boucher, entirely.

VanVleet started slowly, but scored in double figures in the third quarter and did a little bit of everything to help lead his club to the win.

Nurse had been talking in New York about how he felt at some point the Raptors would start to hit some shots. He felt they’d been generating decent enough looks, for the most part, but just were missing them.

Not in this one.

It’s been a tough first couple of months for the Raptors, but the team at least goes into a short holiday break feeling good about themselves.

The Raptors now get a rare three-day break before returning to action Tuesday. Kawhi Leonard, Paul George and the Los Angeles Clippers will be in town. If Leonard plays, it would be only his second appearance in Toronto since leading the Raptors to the 2018-19 NBA title … The win over New York gave Nurse his 200th as an NBA head coach. He’s the fastest Raptors coach to reach the mark, doing it in 340 games … After turning the ball over only five times against New York, a season-low, the Raptors uncharacteristically (they averaged an NBA-low 12.4 turnovers heading in) had trouble holding onto the ball, coughing it up 19 times … Anunoby’s six made threes were the second-most in a game by a Raptor this season after VanVleet’s seven against Houston last month.